Being too early can sometimes be worse than being too late. Uniform Accounting helps uncover whether that is the case for this utilities company

Everyone knows ESG is important, but sometimes the costs of implementing those strategies can be prohibitive. In an industry where efficiency is paramount, being an early mover into ESG strategies and failing could be a death blow.

This utilities company is moving into renewable resources quickly, and is either going to benefit from early-mover advantages or fade completely. Uniform Accounting helps investors identify which.

A couple of weeks ago, we talked about the idea of environmental, social, and governance (ESG) initiatives.

In the case of Blackbaud, the subject of that article, ESG did not come at the expense of returns. The company is actually a high performer in the world of ESG. However, that isn’t always the case.

As companies evaluate ESG strategies, and make decisions around initiatives geared at serving not just shareholders, they have to evaluate the bottom-line impact. Companies don’t just eschew a strong ESG program because they want to pollute, or have poor governance, or poor social impacts.

Companies generally do so because it is often costly to properly implement these programs, sometimes without a benefit that can be shown to shareholders in the near-term. And these are shareholders that boards have a legal obligation to do right by.

Although there are some studies that show a positive relationship between ESG and corporate performance, this relationship can be longer-term, and need years to bear fruit.

Often, management teams can struggle to make the decision to have lower returns now, to have a chance for higher returns down the road. It’s obvious why, it can cost them their jobs.

This is particularly true when the benefits are less tangible, as is the case with ESG.

One major area of ESG investment in recent years has been around investing in renewables, particularly investment from utilities companies. This trend perfectly highlights the struggle some companies have with properly investing in ESG.

Although it is widely held that carbon-based fuels are likely to be depleted world-wide within the next century, those fuels are often cheaper, and more accessible than their renewable counterparts, at least in the near-term.

Infrastructure for distribution of gas and oil has been in place for years. However, to build a wind, water, or solar farm to harness enough energy to displace those is an immense undertaking. Even if the per-watt costs after fixed investments are made are lower, this is a headwind to greater investment.

Governments have implemented tax breaks and subsidies to push both utilities and individuals towards greener energy, but the move has been slow. Solar power only generates ~2% of U.S. electricity today. Wind only supplies ~5% of the electricity.

This is why investors looking at Pinnacle West’s (PNW) as-reported returns over the last several years are likely unsurprised.

The company has a stated mission to clean up its power sources sooner rather than later, and as discussed, this comes at a cost.

Since 2017, as-reported return on assets (ROA) has fallen from 3.5%, to just 2.4%, a significant step lower. A company focused on pivoting to clean energy, these numbers don’t bode well for the prospects of Pinnacle’s strategy.

Investors looking at the firm’s as-reported ROA, and Pinnacle’s pledge to end coal-fired generation sooner than most of their peers, are likely to believe that the firm is too early. This strategy sounds good in theory, but being too early and taking on too many costs could destroy a firm that competes in an industry that requires efficiency to be profitable.

At first glance this could appear to be a value trap that has done exactly what it should, with declining profits driving weak shareholder returns.

However, the as-reported ROA numbers don’t paint the real picture.

In reality, the firm’s returns have risen.

While the market and investors may be punishing the company for its green energy investment, the reality is that the company is having significant success. As the market starts to realize this, it is likely to push the stock higher.

Pinnacle West Embedded Expectations Analysis – Market expectations are for Uniform ROA to remain at current levels, and management is confident about clean energy, supply chain, and revolver but has concerns about maintenance expense, guidance, and Arizona tech 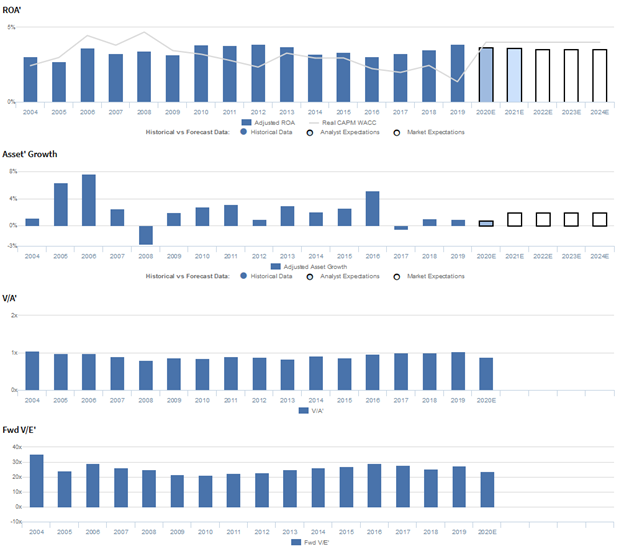 At these levels, the market is pricing in expectations for Uniform ROA to remain at 4% levels through 2024, accompanied by 2% Uniform asset growth going forward.

Meanwhile, Uniform asset growth has been fairly consistent, positive in fourteen of the past sixteen years, and ranging from -3% to 8%. 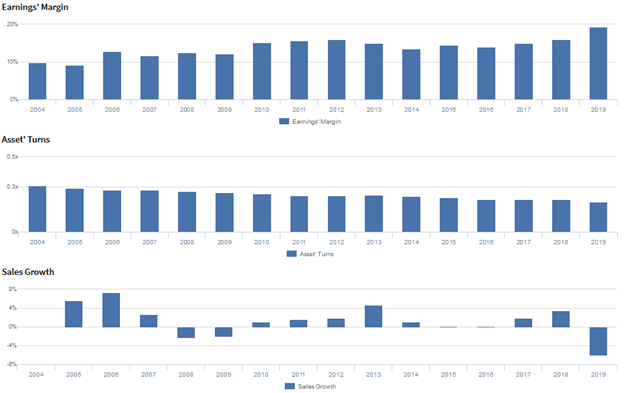 Since then Uniform margins have gradually rebounding to a peak of 19% in 2019.

At current valuations, markets are pricing in expectations for both Uniform margins and Uniform turns to stabilize at current levels.

Valens’ qualitative analysis of the firm’s Q1 2020 earnings call highlights that management is confident about building shareholder value by ensuring customer value through the delivery of power to Arizona, and their goal to provide full clean energy by 2050.

In addition, they are confident about their guidance, the potential changes on their supply chain, and the current level of their revolving capacity and their ability to increase them.

However, they may lack confidence in their ability to defer some of their discretionary maintenance due to COVID-19 and may have concerns about providing outlook.

Finally, they may be concerned about their ability to continue to grow the Arizona tech sector and they may be downplaying concerns about the impact of business closures to their operation.

As-reported metrics significantly understate PNW’s earnings margin, one of the key drivers of profitability. For example, as-reported EBITDA margin for PNW was 39% in 2019, substantially higher than Uniform earnings margin of 19% in the same year.

Moreover, as-reported EBITDA margin has been significantly higher than Uniform earnings margin in each year since 2004, significantly distorting the market’s perception of the firm’s historical profitability.

As the Uniform Accounting tearsheet for Pinnacle West Capital Corporation (PNW) highlights, the Uniform P/E trades at 24.8x, which is above corporate average valuation levels but below recent historical averages.

High P/Es require high EPS growth to sustain them. In the case of West Capital, the company has recently shown 27% Uniform EPS growth.

We take Wall Street forecasts for GAAP earnings and convert them to Uniform earnings forecasts. When we do this, Pinnacle West’s Wall Street analyst-driven forecast is a 4% decline in 2020 and 5% growth in 2021.

Based on current stock market valuations, we can use earnings growth valuation metrics to back into the required growth rate to justify Pinnacle West’s $76 stock price. These are often referred to as market embedded expectations.

To justify current valuations, the company would need to grow their Uniform EPS by 3% each year over the next three years. What Wall Street analysts expect for Pinnacle West’s earnings growth is above what the current stock market valuation requires in 2021.

Furthermore, the Pinnacle West’s earning power is below the corporate average. Also, the company’s intrinsic credit risk is 180bps above the risk-free rate and cash flows will fall short of debt headwalls within five years. Together, this signals high credit risk.

To conclude, Pinnacle West Uniform earnings growth is above peer averages, but the company is trading below average peer valuations.