This Company is a Star of America’s Mittelstand

There are many factors that researchers point to as having helped fuel Germany’s impressive growth over the past twenty years.

The Hartz labor reforms of 2003 unlocked and transformed the labor markets, making it easier to hire and fire employees, and providing a stronger focus on job placement.

The country’s commitment to vocational training, with ideas like the Berufsschule, or vocational school, and apprenticeship being part of the German educational DNA help fill the German industry with skilled employees in key jobs.

One of the biggest factors that researchers point to is the country’s Mittelstand web of small-to-medium-sized businesses.

There are a lot of cultural factors that define the Mittelstand, but what many think of is a web of smaller businesses that are consistently reinvesting in innovation. These are businesses that are world class in their industries, often being industry leaders in incredibly tiny niches, and never being heard of beyond their suppliers and customers.

It is these businesses that power Germany’s world class manufacturing sector and its export powerhouse. They are the suppliers to the industrial greats like Siemens, Volkswagon, Daimler and BMW, and Bosch, just to name a few.

America’s Midwest, in particular Minnesota, Wisconsin, and Illinois, have a significant amount of German heritage, but that’s not all they share with Germany. The shores of Lake Michigan have their own Mittelstand.

Many of the companies here aren’t the size of the small-sized Mittelstand businesses. America’s Mittelstand has largely been consolidated. Larger companies in the area have steadily rolled up smaller ones, but they have all kept the same focus on small niches, and investing in innovation to drive growth.

Even as these companies have gotten larger, they remain companies that those not in their industry never hear of.

These include companies like Manitowoc in cranes, Middleby in restaurant equipment, LCI Industries in RV supplies, to name a few.

One of these great companies is Regal Beloit Corporation. You’ve likely never heard of Regal Beloit, but if you have an air conditioner or a water heater, it’s very likely you’ve used their products. They make small and large motors and other machined pieces a number of industries, from oil & gas and power generation industries to commercial and residential HVAC and water heaters, to commercial refrigeration and manufacturing facilities.

They supply much of American and global manufacturers with the small motors they need to power the products we use every day. The company’s strong economic moat and operations has led to robust Uniform ROA that consistently has been above 10%, with steady growth.

But because the company is so under the market’s radar, as a member of America’s Mittelstand, the market has not cared. The company’s stock has basically been flat the past 5 years.

Market expectations are for Uniform ROA compression, but management is confident about productivity, margins, and inventory 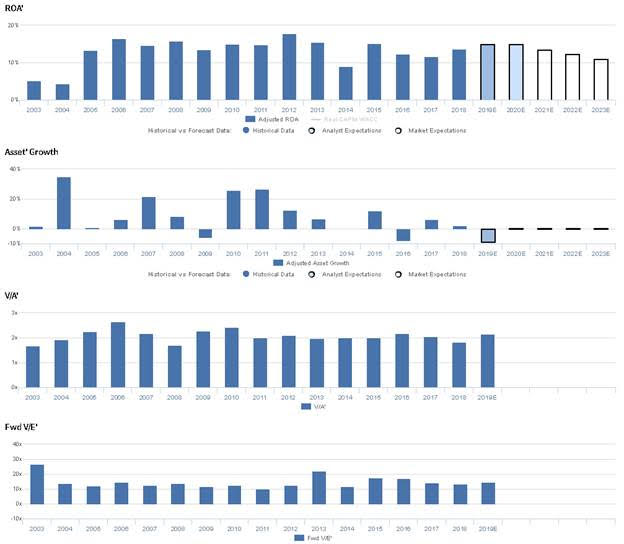 RBC currently trades below corporate averages relative to UAFRS-based (Uniform) Earnings, with a 14.5x Uniform P/E. At these levels, the market is pricing in expectations for Uniform ROA to decline from 14% in 2018 to 11% in 2023, accompanied by immaterial Uniform Asset growth going forward.

However, analysts have bullish expectations, projecting Uniform ROA to improve to 15% through 2020, accompanied by 9% Uniform Asset shrinkage. 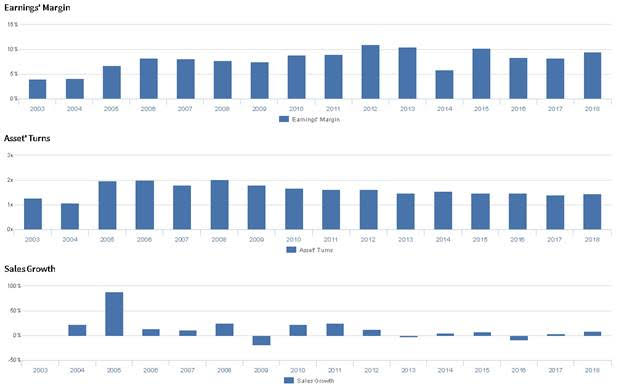 Cyclicality in Uniform ROA has been driven by somewhat offsetting trends in Uniform Earnings Margin and Uniform Asset Turns. Uniform Margins have generally improved, rising from 4% in 2003 to 11% in 2012, before declining to 6% by 2014, and sustaining 9%-10% levels from 2015 to 2018. Meanwhile, Uniform Turns improved from 1.3x in 2003 to 1.8x-2.0x levels in 2005 to 2008, before steadily declining back to 1.4x in 2018. At current valuations, markets are pricing in expectations for Uniform Margins and Uniform Turns to contract to historical lows.

However, management is confident they will be unable to make up for weather-related revenue shortfalls in Q2, and they may be concerned about the timing of their cost benefits from restructuring. Furthermore, they may be downplaying the impact of volume reductions on margin, and they may lack confidence in their ability to sustain growth in their digital business.

Uniform Accounting metrics also highlight a significantly different fundamental picture for RBC than as-reported metrics reflect. As-reported metrics can lead investors to view a company to be dramatically stronger or weaker than real operating fundamentals highlight. Understanding where these distortions occur can help explain why market expectations for the company may be divergent.

As-reported metrics significantly understate RBC’s profitability. For example, as-reported ROA for RBC was 5% in 2018, materially lower than Uniform ROA of 14%, making RBC appear to be a much weaker business than real economic metrics highlight. Moreover, since 2016, as-reported has sustained 5% levels, while Uniform ROA has improved from 12% to 14%, directionally distorting the market’s perception of the firm’s recent profitability trends.

Today’s tearsheet is for Toyota. Toyota trades at well-below market average valuations. The company has historically has weak Uniform EPS growth, but after modest forecast EPS declines in 2020, EPS growth is forecast to be much stronger in 2021. At current valuations, the market is expecting the company to have significantly negative earnings growth going forward. The company’s earnings growth is above peer average levels, but the company is trading at peer average valuations. The company has weak profitability and risk to their dividend.