One may think that electronic sports competitions (Esports) are just a few years old. However, the industry roots back as old as 1972, when the students formed a video game competition for a game called “Spacewar” at Stanford University.

From 1972 to 2022, with a history of 50 years, the world of gaming and Esports has changed massively. Since online streaming services have been gaining popularity, the industry started to see immense growth over the last few years and drew huge crowds.

With such history, growth potential, and a huge audience around the globe, today we are going to examine VanEck Video Gaming and Esports ETF (ESPO) under the lens of Uniform Accounting.

With a history of 50 years, Esports has been evolving alongside the countless developments in computers and the internet.

The earliest known competition took place at Stanford University in 1972 with a grand prize of the year’s subscription to Rolling Stones magazine.

However, Esports gained its first step of popularity through a nationwide arcade video game tournament in Japan, organized by Sega (6460:JPN) in 1974.

In the United States, the earliest large-scale video game competition took place in 1980 with The Space Invaders Championship held by Atari. The competition attracted more than 10,000 participants across the country.

Esports and gaming have been among the most popular hobbies ever since, and the industry grew from 10,000 participants in the 1970s to millions of participants and viewers in the last decade.

The Esports industry has seen massive growth in the last 10 years through the emergence of online streaming services.

Thanks to streaming platforms, the Esports industry has been able to increase its audience and its market size.

On top of that, the growth momentum sped up with the pandemic, as people started to entertain themselves at home.

For those looking to take advantage of the growth opportunity in the Esports market, the VanEck Video Gaming and Esports ETF has been a popular option.

Let’s dive into the portfolio using Uniform Accounting to see if it has been able to profit from the surge in the Esports market. 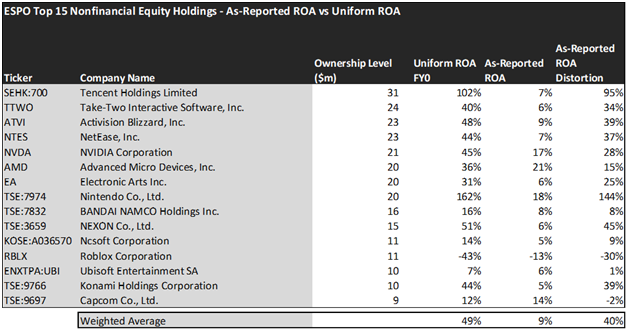 Using as-reported accounting, investors would think investing in the Esports industry would result in the portfolio achieving a weak return on assets (ROA).

On an as-reported basis, many of these companies are poor performers in terms of profitability and operating with an average as-reported ROA of just 9% which equates to below corporate averages in the United States.

However, once we make Uniform Accounting (UAFRS) adjustments to accurately calculate earning power, we can see that the returns of the companies in the VanEck Video Gaming and Esports ETF are much more robust.

The average company in the portfolio displays an impressive average Uniform ROA of 49%, which is around four times the corporate average returns.

Once the distortions from as-reported accounting are removed, we can realize that Tencent Holdings (700:HKG) doesn’t have a ROA of 7%, but returns of 102%.

Similarly, Nexon’s (3659:JPN) ROA is actually 51%, not 6%. Nexon has a successful history in the Esports industry and is now the second-largest game company in South Korea.

Nintendo (7974:JPN) is another great example of as-reported metrics misrepresenting the company’s profitability. With a Uniform ROA of 162%, an as-reported of 18% is wholly misleading and misses the story.

If investors were to look at the industry as powered by as-reported metrics, they would think that Esports is not as profitable as it seems, and all the growth potential of the space is nonsense.

Those that are thinking to invest in the Esports space should not jump in before considering if it has a strong upside scenario going forward. 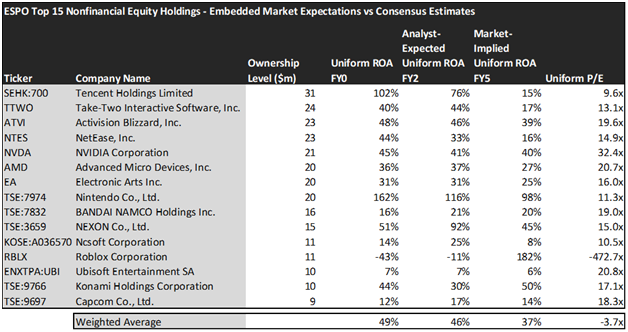 Embedded Expectations Analysis of VanEck Video Gaming and Esports ETF paints a clear picture of the fund. While the market expects returns to fall slightly, the stocks may be undervalued as analysts expect returns to improve.

While analysts forecast the fund to see Uniform ROA drop to 46% over the next two years, the market is pricing the fund to see returns decrease to 37% levels. This means investors may be presently surprised when the Esports companies are set to overperform.

Investors expect Tencent Holdings (SEHK:700) to see returns fall to 15%, while analysts are pricing in returns of 76%.

Furthermore, investors have low expectations for NEXON (TSE:3659). They expect the ROA to fall to 45%, while analysts expect it to skyrocket to 92%.

Overall, the portfolio reflects the growth opportunities and high profitability in the surging Esports industry, but the risk that comes with the high growth should not be forgotten.

Read on to see a detailed tearsheet of VanEck Video Gaming and Esports ETF’s largest holding.

As the Uniform Accounting tearsheet for Tencent highlights, its Uniform P/E trades at 9.6x, which is below the global corporate average of 19.7x, but above its historical average of 6.1x.

Low P/Es require low, and even negative, EPS growth to sustain them. In the case of Tencent, the company has recently shown immaterial Uniform EPS growth.

We take Wall Street forecasts for GAAP earnings and convert them to Uniform earnings forecasts. When we do this, Tencent’s Wall Street analyst-driven forecast is for EPS to grow by 42% in 2022 and decline by 12% in 2023.

Based on the current stock market valuations, we can use earnings growth valuation metrics to back into the required growth rate to justify Tencent’s HKD 316 stock price. These are often referred to as market embedded expectations.

The company is currently being valued as if Uniform earnings were to shrink by 8% annually over the next three years. What Wall Street analysts expect for Tencent’s earnings growth is above what the current stock market valuation requires in 2022, but below that requirement in 2023.

Meanwhile, the company’s earning power is 12x the long-run corporate averages. Also, cash flows and cash on hand are nearly 3x the total obligations—including debt maturities and capex maintenance. Moreover, intrinsic credit risk is just 60bps. All in all, these signal low dividend and credit risks.

Lastly, Tencent’s Uniform earnings growth is above peer averages and is trading above its average peer valuations.