You didn’t realize this company feeds all your pets

The spinoff of Adient was a huge deal for Johnson Controls (JCI).

Johnson Controls was a leading auto supplies company for years. They were one of the largest auto seat manufacturers. They also made car batteries.

The company had started in 1885 making temperature control systems for buildings. However over the years, their investments in the automotive space had made most focus on their automotive business.

This focus was a significant benefit for the company for most of the 1900s. The boom in autos caused a decades long bull market in the companies that supplied auto manufacturers.

However, as auto companies came more under pressure, especially in the 2000s when they came under credit pressure and GM went bankrupt in 2008, being an auto supplier became deadly for valuations.

For over a decade, the auto suppliers have all trended at P/Es that hover around 10x, with rare exceptions.

But as long as over 50% of Johnson Controls revenue came from its business supporting the auto OEMs (original equipment manufacturers – the auto companies), they weren’t going to be valued like the building efficiency companies, who traded at significantly higher valuations.

So in 2016, the company came up with a solution. They bought Tyco, bulking up their business overall, and then they spun off Adient. Adient contained all their auto seat business. They kept their batteries business, but by spinning off Adient, they now had significantly more revenue from the building efficiency business, including the building security business they acquired as part of Tyco.

This meant they could justify changing their industry classification from auto supplier to building products. It also was part of what led to their P/Es moving from around 10x before mid 2016 to over 17x currently.

When most people hear the name Smuckers (SJM) they think of jams and jelly. Choosy people even realize that they don’t just make ½ of a peanut butter and jelly sandwich, they make Jiff also..

Those that are exceptionally savvy realize that that isn’t even the largest part of their business. Folgers and the company’s coffee business is $2.1 billion, versus $1.76 billion for their consumer foods business.

However, both of these businesses are relatively mature businesses. Selling coffee and selling peanut butter and jelly aren’t growth businesses. This might make investors raise an eyebrow at Smuckers’ 22x as-reported P/E.

And the pet food business is a growing business. Spending on pet food and pets overall is a significant growth market in the US and globally. This is the type of business that justifies a 22x P/E or higher. For context, Blue Buffalo was sold to General Mills (GIS) in 2018 for almost a 40x P/E.

The most interesting thing about Smuckers might not be that it is as much a pet food company as a food company for humans. It is that Uniform Accounting highlights the company’s real P/E is 17x. The market is not pricing Smuckers like a higher growth company that it is. And not only is the company cheaper than as-reported metrics reflect, the company has strong fundamentals, and management is showing confidence about fundamental drivers that may enable them to exceed market expectations.

Market expectations are for Uniform ROA compression, but management is confident about their positioning, brand strength, and performance 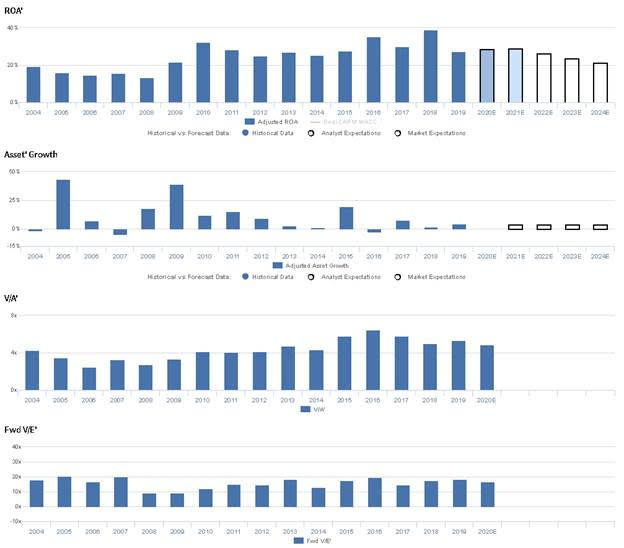 SJM currently trades below recent averages relative to UAFRS-based (Uniform) Earnings, with a 16.8x Uniform P/E. At these levels, the market is pricing in expectations for Uniform ROA to fade from 27% in 2019 to 21% by 2024, accompanied by 4% Uniform Asset growth going forward.

However, analysts have bullish expectations, projecting Uniform ROA to improve to 29% by 2021, accompanied by immaterial Uniform Asset growth. 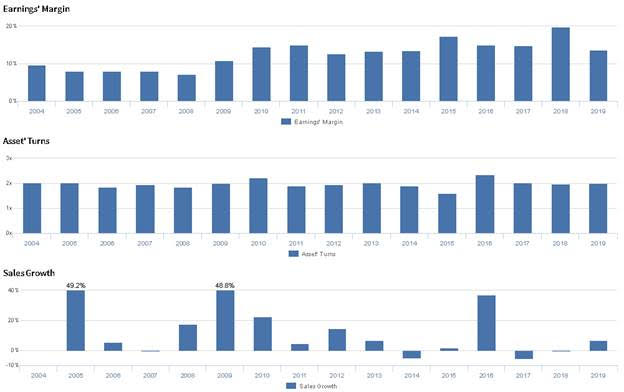 However, management may lack confidence in their ability to execute on their strategic growth imperatives, and they may be concerned about further shortfalls in U.S. Retail Coffee. Furthermore, they may be concerned about the scope of their current marketing initiative, further declines in International Away From Home profit, and a continued deflationary environment in coffee and peanut butter.

Uniform Accounting metrics also highlight a significantly different fundamental picture for SJM than as-reported metrics reflect. As-reported metrics can lead investors to view a company to be dramatically stronger or weaker than real operating fundamentals highlight. Understanding where these distortions occur can help explain why market expectations for the company may be divergent.

As-reported metrics significantly understate SJM’s asset utilization, one of the primary drivers of profitability. For example, as-reported asset turnover for SJM was 0.5x in 2019, materially lower than Uniform Turns of 2.0x, making SJM appear to be a much weaker business than real economic metrics highlight. Moreover, as-reported asset turnover has been roughly a fourth of Uniform Turns in each year since 2009, distorting the market’s perception of the firm’s asset efficiency for a decade.

Today’s tearsheet is for Chevron. Chevron trades at a significant premium to market valuations. At current valuations, the market is pricing in Uniform EPS to grow, while the company is actually forecast to have EPS shrinkage the next two years. The company’s earnings growth is below peers, while the company is trading at the higher end of peer levels. Importantly, the company has risk to their dividends if they cannot improve their capital structure and obligations.