Note from Valens: Just before the pandemic, we wrote about what made Berkshire Hathaway one of the greatest portfolios of our time. To close the year, we wanted to revisit one of our first articles of the year and provide an update on how Warren Buffett has fared.

Steinman just had one condition, his fiancée, who was apparently not a very talented singer or actress, had to be the lead.

Warren Buffett summarized Graham’s teachings with this one comment:

After leaving Columbia, Buffett took several stops through the world of finance, including working for Ben Graham’s investment partnership. Then Buffett gained control of Berkshire Hathaway.

One thing is for sure…he is not relying on the as-reported GAAP earnings numbers to conduct his analysis.

Buffett is not alone in recognizing that as-reported earnings numbers and other financial statement data are terribly problematic and misleading. He is certainly one of the more outspoken on the issue.

That’s why Uniform Accounting and Uniform Financial Analytics are so powerful. Financial data that reflect the real economic performance and valuation of firms are necessary for great value investing. They unlock and reveal insights about the world of companies that arcane accounting – the existing accounting – hides and misleads.

We’ve conducted a portfolio audit of Berkshire’s top holdings, based on its most recent 13-F, in order to see how Buffett has adjusted during the pandemic. 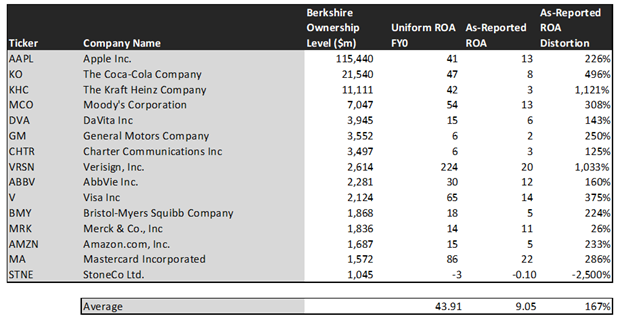 On an as-reported basis, many of these companies are poor performers with returns at 10% or below, with the average as-reported return on assets (ROA) right around 9%.

In reality, the average company in the index displays an impressive average Uniform ROA of 44%.

Once we make Uniform Accounting (UAFRS) adjustments to accurately calculate earnings power, we can see the underlying strength of the portfolio.

Once the distortions from as-reported accounting are removed, we can see VeriSign (VRSN) does not have a return of 20%, but a sizable ROA of 224%.

Similarly, Mastercard’s (MA) ROA is really 86%, not at 22%. While as-reported metrics are portraying the company as a slightly above-average business, Uniform Accounting shows the company’s truly robust profitability.

The list goes on from there, for names ranging from Moody’s (MCO) and Visa (V), to AbbVie (ABBV).

One notable change from Berkshire’s portfolio snapshot back in January is its rotation out of airlines like Delta (DAL), Southwest (LUV), and United Airlines (UAL) and into healthcare companies like Bristol-Myers Squibb (BMY) and Merck (MRK). 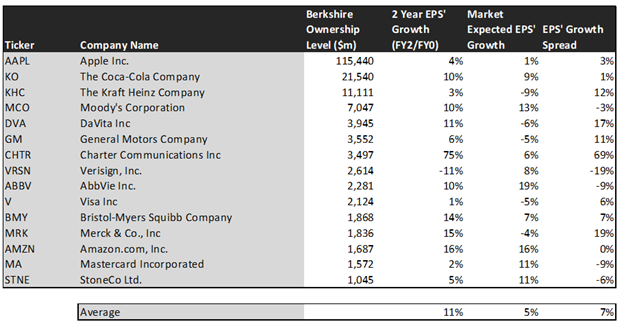 The average company in the U.S. is forecast to have 5% annual Uniform Accounting earnings growth over the next 2 years. In comparison, these top stocks are forecasted by analysts for 3% Uniform earnings growth.

On average, the market is pricing these companies to shrink earnings by 10% a year. Analyst’s projections are well ahead of the market’s expectations.

One example of a company with high growth potential is AbbVie (ABBV). While analysts forecast AbbVie to grow by 10% over the next two years, the market expects the firm to see a 19% growth over the same period.

Another example is Charter Communications (CHTR). The company is reasonably priced, as the market expects Uniform earnings to grow by 6%, but the company is forecasted to in fact grow its EPS by 75% in the next two years.

That being said, there are many companies forecast to have earnings growth less than market expectations. For these companies, like General Motors (GM), Amazon (AMZN), and Moody’s (MCO), the market has growth expectations in excess of analysts’ predictions.

Ultimately, once we make uniform accounting adjustments, we can see that Berkshire is investing in high quality businesses, forecasted to grow in excess of market expectations.

High P/Es require high EPS growth to sustain them. In the case of Apple, the company has recently shown a 10% Uniform EPS growth.

We take Wall Street forecasts for GAAP earnings and convert them to Uniform earnings forecasts. When we do this, Apple’s Wall Street analyst-driven forecast is a 19% Uniform EPS and a 3% Uniform EPS growth in 2021 and 2022, respectively.

Based on current stock market valuations, we can use earnings growth valuation metrics to back into the required growth rate to justify Apple’s $122 stock price. These are often referred to as market embedded expectations.

The company would need to grow its Uniform earnings by 10% each year over the next three years to justify their current valuation. What Wall Street analysts expect for Apple’s earnings growth is way above what the current stock market valuation requires in 2021, and way below that requirement in 2022.

To conclude, Apple’s Uniform earnings growth is well above its peer averages in 2020, and is also trading above average peer valuations.