The desire to pay attention to wild predictions has led to this fund flying under the radar, Uniform Accounting shows investors should pay attention

Even the biggest companies start small

Excluding banks and insurance companies, there are a little over 100 companies in the US with market capitalization greater than $50 billion. These giants are the big world beating companies that dominate their industries. They’re the companies we see talked about every day on CNBC.

Investors often talk about how network effects and scale mean these companies are unstoppable, and people pile into FAANG stocks. But most forget there were many successful big companies before the FAANGs…and many of them have not survived, no matter how bullish investors got about their perpetual economic moats.

Just when investors start thinking large companies are going to remain big perpetually is often when they are most ripe for disruption. And those 100 current megacap companies are a prime example.

An investor who bought Salesforce.com (CRM) when it broke a $100 billion market cap has seen the firm grow by 65%.

Even Amazon was a $400 million microcap stock at one point in 1997, before it became a $1.3 trillion behemoth.

While most investors focus on those big cap names and hope they can just keep on getting bigger, some of the smartest investors look for smaller names that can get big.

One of the most underappreciated places investors can look for those names is the underfollowed microcap space.

Many avoid this space because they think the names are too small, and more importantly, this is the wild west, it isn’t policed by the SEC and other regulatory bodies like bigger companies are. That means concerns about snakeoil salesmen and misunderstood companies that can stop an investor in their tracks.

For investors who can do sound research though, and identify the tiny companies that have big market opportunities, strong operations, and therefore have massive upside…they can make multiples on their money.

Because once these small companies are big enough to get on the market’s radar, they take off.

Along with Uniform Accounting, we’ve been spending the past 10 years and more building the tools that can allow us to both avoid the torpedoes in microcap land, and find the potential multi-bagger names with big upside.

We’re excited to announce that we’ve just launched a new product under our Altimetry brand for individual investors that can do just that for our clients. Identify the microcap companies that are primed to take off.

We’ve identified 7 names that we think are compelling right now, and put together a special report on those names, the names investors should avoid in microcap land, and our process to find the kind of microcaps that can be multi-baggers.

We’ve even prepared a video to tell you about the opportunity. In that video, we tell you what our favorite microcap company is right now, for free.

If you want to hear more about the opportunity, see how you can subscribe, and hear about our favorite microcap idea right now for free, click here.

In the investing world, value investors tend to receive all of the press because they are making sweeping declarations about the changing nature of the market.

Using as-reported metrics, it wouldn’t be clear just how much growth this fund’s investments are producing, or why they are growing so much with such low returns. However, using Uniform Accounting, we can understand why the fund is choosing the companies it does.

“Prophecy is a good line of business, but it is full of risks.” -Mark Twain

Throughout history, mankind has been fascinated with an ability to predict the future. People who make extraordinary predictions about future occurrences are those who get the most press.

In 1555, the astrologer and apothecary Nostradamus wrote Les Prophéties, where he laid out in cryptic language the future disasters to befall Europe. To this day historians argue about the validity of Nostradamus’ exotic claims about the future. Some claim that Nostradamus predicted the current outbreak of the coronavirus.

Nostradamus’ wild claims and couched language has given him eternal fame. Meanwhile, history has forgotten the historians and monks who wrote alongside Nostradamus and predicted Europe would just continue to evolve over the next five hundred years. The truth of prophecy is that the wild claims sell.

This is as true in 2020 as it was in 1555. Today, cable financial news channels attract viewership with their panelists who discuss moonshot stocks and options trades. Without unique viewpoints and names with large potential for returns, viewers would have no interest in the prophecies being foretold.

This is part of the reason why value investors receive a sizable share of media reporting. Value investors paint themselves as the lone rangers of the investment world because they stake a definitive position in a security the market is failing to consider.

Due to their message of volatility and change, it is too easy to only pay attention to the value investors. If a company changes its business plan, it could be undervalued. If demand for their product were to change, margins could explode. Value investors can pitch a prophecy to readers.

In contrast, this is why growth investors are often almost viewed as boring when talking about investment ideas. As the growth investor looks to stability, they are painted as trend followers and suckers for momentum stocks. Rather than investing in change, they invest in stability and consistency.

While growth investors don’t tell a prophecy to Wall Street, they capture a fundamental truth of the market. Companies which are growing their earnings tend to continue improving performance, and the market will pay as earnings growth continues.

This phenomenon can help explain why the Growth Fund of America is one of the largest actively managed mutual funds in the world, but is not widely beloved like some of its value investing peers. By focusing on growth stocks, this fund has made money on the REAL underdog strategy of the equity market.

And we can take a look at the Growth Fund of America’s equity portfolio, using its most recent 13-F, to provide a window into the firm’s growth mindset. We’re showing a summarized and abbreviated analysis of how we work with institutional investors to analyze their portfolios.

While these names may appear to be poor growth investments using as-reported metrics, these securities are in truth stronger names once Uniform Accounting metrics are reviewed. 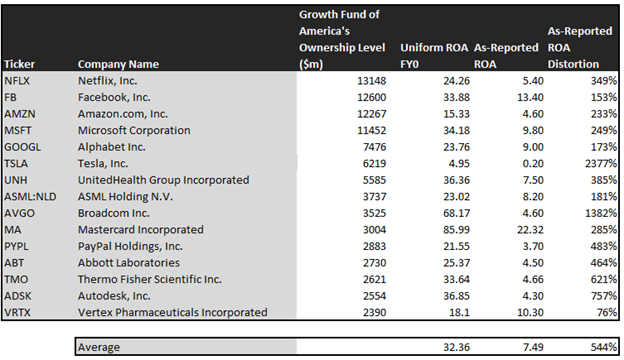 Using as-reported accounting, investors would think the Growth Fund of America was buying anything other than high-quality growth businesses that align with its strategy.

On an as-reported basis, many of these companies are poor performers with returns at 5% or below, and the average as-reported return on assets (ROA) is right around 7%.

In reality, the average company in the portfolio displays an impressive average Uniform ROA at 32%.

Once we make Uniform Accounting (UAFRS) adjustments to accurately calculate earning power, we can see these are the kind of high-quality growth names that earn the Growth Fund of America a sizable return.

Once the distortions from as-reported accounting are removed, we can realize that Broadcom (AVGO) doesn’t have a poor ROA of 5% that’s only around cost of capital levels, but a significant ROA of 68%.

Similarly, the Thermo Fisher Scientific (TMO) ROA is really 34%, not 5%. While as-reported metrics are portraying the company as a business in line with cost of capital, Uniform Accounting shows the company’s true robust operations.

PayPal (PYPL) is another great example of as-reported metrics mis-representing the company’s profitability.

PayPal doesn’t have a 4% ROA, it is actually at 22%. The Growth Fund of America appears to understand that PayPal is not a company with its best days behind it as the as-reported metrics would imply.

The list goes on from there, for names ranging from Abbott Laboratories (ABT) and Microsoft (MSFT), to Mastercard (MA), UnitedHealth Group (UNH), and even Facebook (FB).

If the Growth Fund of America were focused on as-reported metrics, it would never pick most of these companies because they look like anything but companies the fund is focused on.

But it’s not just picking high-return resilient businesses that get the Growth Fund of America its name. It generates outsized returns from finding companies that have strong economic moats, and also are able to grow significantly.

Based on the Uniform Accounting data, it’s doing a great job. 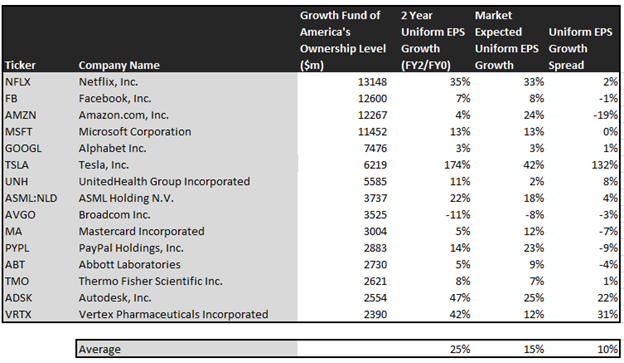 The average company in the US is forecast to have 5% annual Uniform Accounting earnings growth over the next 2 years. The Growth Fund of America’s holdings are forecast by analysts to grow five times that number, at 25% a year the next 2 years, on average.

The fund is clearly choosing growth stocks with strong underlying fundamentals to ensure that growth will continue.

One example of a high growth company in the Growth Fund of America’s portfolio is Tesla (TSLA). While the market expects Tesla to have a sizable 42% Uniform earnings growth over the next 2 years, Tesla is forecasted by analysts to have 174% growth over the same period.

Another company with similar dislocations is Vertex (VRTX). The company is forecast for Uniform EPS to grow by 42% a year, and the market is expecting the company to only grow by 12%.

Yet another example is Autodesk (ADSK). The company is expensive, as it is priced for 25% growth in Uniform earnings, but the company is forecast to grow earnings well above market averages by 47% a year.

That being said, there are some companies that are forecast to have strong earnings growth, but the market is paying a higher premium. For these companies, like Netflix (NFLX), Microsoft (MSFT), and Facebook (FB), the market has growth expectations in line with analysts’ predictions.

That being said, overall, the Growth Fund of America has clearly done an excellent job of identifying high-growth, high-quality names.

In total, the Growth Fund of America has rejected the model of Nostradamus. Rather than making wild but cryptic predictions, the fund managers are looking to find companies with storied success. Then, by investing in firms with strong fundamentals, they can ensure continued growth.

It wouldn’t be apparent using as-reported metrics, it is using Uniform Accounting. It is clear based on the numbers that the Growth Fund of America is looking at the right, Uniform data when making its investment decisions.

As our Uniform Accounting tearsheet for Netflix, Inc. (NFLX:USA) highlights, Netflix’s Uniform P/E trades at 49.8x, which is above average valuation levels and its historical average levels.

High P/Es require high EPS growth to sustain them. In the case of Netflix, the company has recently shown a 45% Uniform EPS growth.

We take Wall Street forecasts for GAAP earnings and convert them to Uniform earnings forecasts. When we do this, Netflix’s Wall Street analyst-driven forecast is a 43% and a 28% Uniform EPS growth in 2020 and 2021, respectively.

Based on current stock market valuations, we can use earnings growth valuation metrics to back into the required growth rate to justify Netflix’s $477 stock price. These are often referred to as market embedded expectations.

To justify current valuations, the company would need to grow their Uniform EPS by 33% each year over the next three years. What Wall Street analysts expect for Netflix’s earnings growth is above what the current stock market valuation requires in 2020 but below its requirement in 2021.

To conclude, Netflix’s Uniform earnings growth is above peer averages in 2020. Therefore, the company is also trading above average peer valuations.