The power of margin trading can boost or pressure the economy

At Valens, we often talk about the impact of credit and the credit cycle when discussing the direction in which the economy is going to go.

However, there are numerous types of credit, which all influence the economy in different ways. While corporate credit powers the earnings cycle, margin debt used by investors to trade has a direct impact on the economy as well.

Credit is the gasoline the economy runs on. If the economy were a great machine, the pistons and gears would be the workers and companies that make up the GDP. However, credit is what powers this process.

When we normally talk about credit, we are referring to the impact of credit as the gasoline to the “real economy,” meaning companies, individuals, or even government borrowing funds to invest and keep the engine running.

This borrowing allows governments to invest in infrastructure, or companies to invest in new manufacturing plants and grow earnings, and individuals to buy cars and houses. This earnings growth is also what keeps the stock market trending upward over time.

There’s another form of credit though, that doesn’t make it into the real economy, but has a direct impact on corporate valuations. Investor credit, by way of margin accounts and artificial leverage through options, directly drives the stock market as well.

If an investor has conviction a stock will go up or down, they could buy on margin or use options to magnify returns. By borrowing money to buy stocks, if an investor is right, they only have to return the initial outlay plus interest, keeping the extra profit.

If the stock goes south, they could lose more than 100% of their investment.

When a lot of investors are leveraged to the hilt, and the market takes a step back, waves of margin calls and defaults can turn a modest pull-back into a bigger sell-off.

This is what happened to Archegos during its recent collapse. The fund was using complex financial instruments with leverage. Then, when a few trades moved against them, the fund was forced to unwind all of its positions to cover its debts.

As recent FINRA and Advisor Perspectives data highlights, it is not just the funds like Archegos becoming overexposed. Margin debt is climbing rapidly across the board.

Now, let’s see if margin debt could cause a market collapse.

As we mentioned, when everyone is “all in” on the market, any bad news can quickly snowball in the wrong direction.

Typically, to measure the risk of margin debt, people will look at how much credit people have taken out in total.

The chart below shows when investors have a positive “credit” balance, meaning they are net cash, and when they are actively taking on margin debt, which is when the chart goes red.

As you can see below, since 2013, there has been a building negative nominal credit balance, as investors have taken out money to fund stock purchases.

This chart shows we are at all-time highs for margin debt, which would mean we should be preparing for the worst, a margin-led stock market pullback. 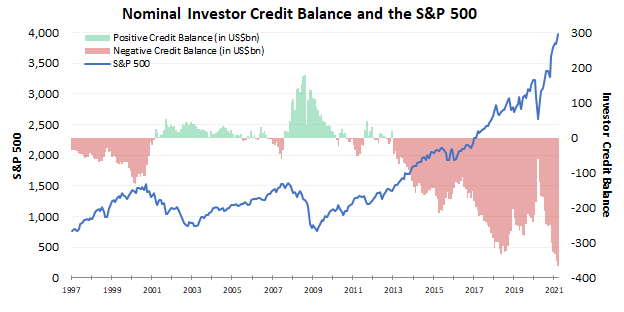 However, at Valens, we understand there needs to be a more nuanced approach to looking at this data.

Context is key to measure real risk. This chart fails to take one important piece of context into account.

Market levels themselves have a large impact on the value of margin, as wealth is being created and destroyed by the stock market every day.

Since there’s a lot more wealth sitting in the S&P 500, and in the market as a whole, higher-margin debt doesn’t mean people are necessarily leveraged to the hilt. Investors also have a lot more equity.

To take this into account, when measuring margin debt, we index it against the S&P 500 to get the right context.

Once we normalize everything, we can see conditions are still concerning, but not as apocalyptic as they initially appear.

First, as you can see below, investor credit balances are not as high as mid-2018, when things really got extended.

This means even after we adjust for the wealth created in the S&P 500, investors are still exposed to debt in the market. 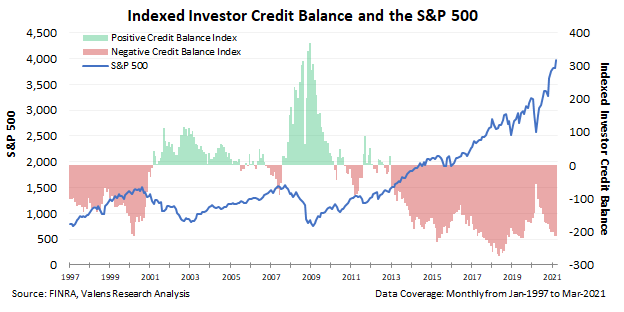 Of course, as you can see above, just because margins get high, it doesn’t mean a market collapse is imminent.

For all the “teeth-gnashing” of 2015, while outstanding margin debt was near all-time highs on an indexed basis, the market quickly recovered through 2016 and beyond.

The market simply needed time to digest this leverage, which meant a sideways to the slightly down market, not a spiraling collapse.

Similarly, while there was a sell-off at the end of 2018, the market quickly rebounded after this over-exposure was worked through. This is because the underlying businesses didn’t suffer from credit issues which are the causes of prolonged recessions.

What does this mean for today? Just because there are elevated levels of investors trading on margin, it doesn’t mean the market is ready for a total collapse as corporate credit levels are still strong.

However, investors should be ready for volatility in the short-term, similar to 2015 and 2018, as the market digests this recent run in investor excitement and buying on margin.