Many people today do not know the origin of basic finance terms we use today. From ‘long’ and ‘short’ to ‘bull’ and ‘bear’ markets, many of these terms predate our modern financial system.

Today, we will explore the origin of the ancient tally stick and how it’s still relevant today.

When you’re investing in a stock, your expectations are usually that the stock will change in value over the long-term.

If you buy the stock, you’re betting it will go up.

Conversely, if you think the stock will go down, you can preemptively sell the stock and then buy it back at a lower price for a profit.

Institutional investors rarely refer to this as ‘buying’ and ‘selling’.

Rather, they are ‘long’ a stock or ‘short’ a stock, respectively.

But what exactly do these expressions mean, and why do we use them today?

It turns out we may need to look all the way back to the Late Stone Age for the complete story.

Since homo sapiens first began showing traits of developing societies, including signs of deeper interpersonal communication and relationships, more advanced cognition, and symbolic behavior, we have relics that roughly show us how early humans acted.

Historians, anthropologists, and archeologists have uncovered early tools and artifacts as old as tens of thousands of years ago.

One of these artifacts is the key to our story: the tally stick.

While we don’t know for sure, it’s thought that these early relics were used to track lunar cycles and for other various rituals.

We have come to know these objects as the earliest form of tally stick.

These sticks have improved and changed their purpose throughout time, recording increasingly complicated information.

During the time of the Persian Empire, tally sticks were used to help convey messages and keep better “tally” of personal matters.

On a separate note, this is also where we get the name and the concept for the tally marks we still use today.

In the evolution of the tally, the period we are most focused on is medieval Europe, when the ‘split tally stick’ became popular. Split tallies were a more complex version of earlier tally sticks.

In addition to having a more formalized tally system, the stick was able to be divided in two in order to give two participants the same set of information.

This was useful as a form of receipt in early transactions–it kept both parties honest.

If one participant promised to pay the other with five cows, it was impossible to forge the transaction to change the number of cows after the fact.

After the stick was split, each half would only match up perfectly with the other part of the same original stick.

The split tally would therefore always show the original agreement.

The split tally was quickly adopted as legally binding in early court cases because of its
anti-forgery protection.

The below picture showcases the final feature of the medieval tally stick that made it so useful for financial transactions. 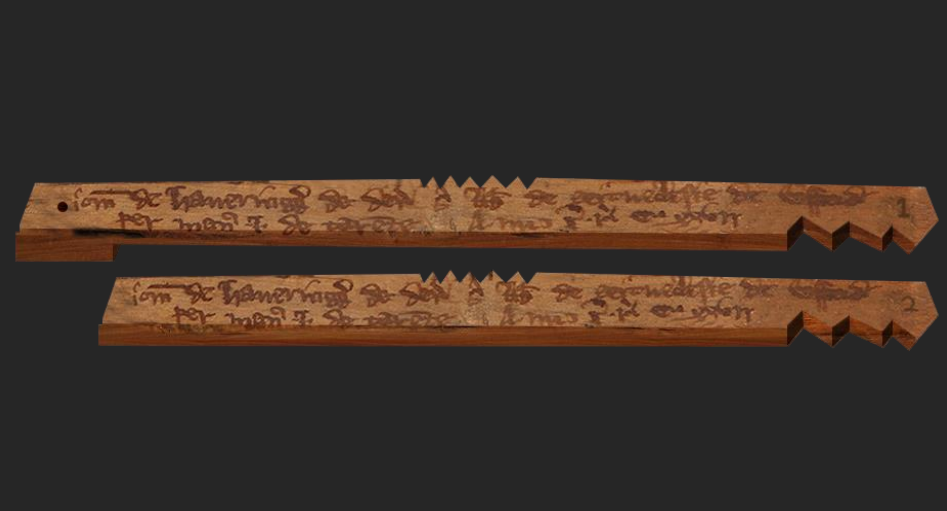 The two pieces of the tally stick were not split completely evenly. The larger piece would be entrusted to the buyer, while the shorter piece was given to the seller – the person who owed something at the end of the transaction.

Similarly, back in medieval times, both pieces of the split tally had another name.

While the short end of the stick was called a ‘foil’, the longer piece was known as a ‘stock’.

That’s where the term “owning stock” comes from.

Many investors don’t realize where these terms come from, but such a simple and historical way to track financial transactions is why we still say ‘long’ and ‘short’ today.