This Ben Graham disciple was railing on as-reported accounting long before we were, and his portfolio shows the issues with GAAP accounting

True greats in any field stand on the shoulders of fellow giants. Be it Plato building off his learnings from Socrates or this value investor, building off of Ben Graham’s teachings.

Uniform Accounting metrics highlight how this fund is focused on a deep value approach. On the other hand, as-reported metrics are misrepresenting the company’s investments as turnarounds, not just misunderstood companies.

It’s not surprising this investor’s fund and legacy has strong foundations in identifying companies the market and GAAP accounting misunderstands. He often railed against the distortions from as-reported accounting metrics.

Many know the name Socrates, especially those who studied philosophy. Interesting then that he never wrote anything down that has survived to today.

As great of a teacher as Socrates was, we know of his teachings today because his student, Plato, wrote down his insights and expanded upon them.

Plato’s dialogues are amongst the first studies of philosophy books with which many philosophy students first come into contact.

Many ancient Athenians revered Socrates as the philosophical great. However, in the modern era, it would seem that Plato is seen as the peak of Athenian philosophy.

After all, Plato built on and refined his teacher’s lessons, and expanded them. (Apologies to those readers who may be Aristotlian empiricists… empirically, the readership stats bear Plato as holding the title).

The giants of any field of learning become that way by standing on the shoulders of other giants.

That was true of Plato and Socrates, and it is true of the investing great we’re talking about today.

Today’s value investing great succeeded by studying, emulating, and expanding the analysis of another investing giant.

Martin Whitman stood on Ben Graham’s shoulders and built off of his philosophy.

Ben Graham is widely accepted to be the founder of modern value investing, having written both Intelligent Investor and Security Analysis.

Marty Whitman so deeply respected Graham’s value investing philosophy that when he came out with his fourth book on investing, in an homage to Graham, he titled it Modern Security Analysis.

Whitman felt the need to “update” Security Analysis because he recognized that while Graham’s value investing approach was his platonic ideal, distortions had grown rampant in as-reported GAAP accounting.

The investing philosophy needed to be augmented.

These problems made traditional value investors’ ability to identify what a company’s intrinsic value was, and when it was mispriced, next to impossible without significant adjustments.

Even before we were focused on building Uniform Accounting (UAFRS) to solve the issues with distorted as-reported GAAP and IFRS accounting, Whitman was already railing against these issues.

One of our favorite Whitman quotes sums up his views on traditional equity research and GAAP accounting quite eloquently:

“A lot of what Wall Street does has nothing to do with the underlying value of a business.”

Marty spent many of his quarterly shareholder letters highlighting the issues with as-reported accounting.

He was also famous for spending many of his meetings with his analyst team, educating them on why their conclusions from as-reported accounting were flat wrong.

While Whitman passed away in 2018, his investing philosophy remains at the core of Third Avenue’s portfolio management.

Using as-reported financial data could cause you to make directionally wrong decisions because of its rampant distortions.

Only by combining a value investing process and better cleaned up data can investors identify ideas that are likely to succeed.

While Third Avenue may not be using Uniform Accounting specifically, the firm’s approach should line up with the insights that Uniform Account shows.

Unsurprisingly, when we look at the firm’s 13-F holdings, we see that it does.

We’ve conducted a portfolio audit of Third Avenue’s top holdings, based on their most recent 13-F, focusing on their non-financial company holdings. 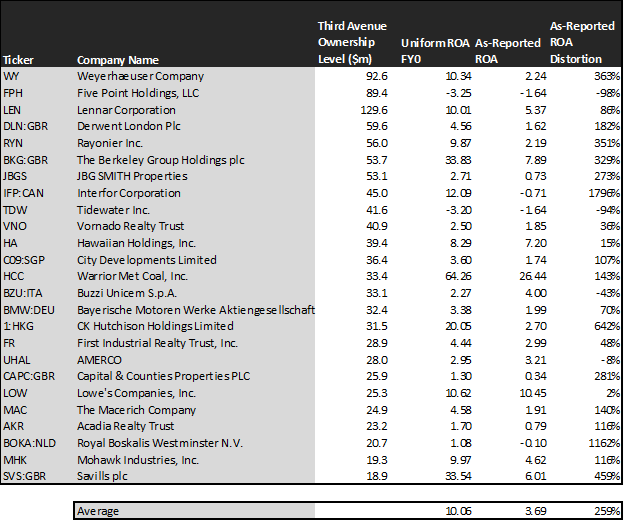 In reality, that is not the case.

Third Avenue is buying solid businesses that are just completely misunderstood by GAAP and IFRS accounting.

The average company in the portfolio displays an average Uniform return on assets (ROA) at 10%. That’s roughly in line with corporate average returns currently.

On an as-reported basis, many of these companies are poor performers with returns below 6%, and the average as-reported ROA is only 4%.

We make Uniform Accounting (UAFRS) adjustments to accurately calculate the earning power of each firm.

We can see that the returns of the companies in Third Avenue’s portfolio are around corporate averages, while as-reported metrics makes it look like these companies are turnarounds that need to make massive improvements.

Once the distortions from as-reported accounting are removed, we can realize that Weyerhaeuser (WY) doesn’t have a 2% ROA, it is actually at 10%.

Weyerhaeuser is a stable company executing on its strategy, not a broken down forestry REIT in need of resuscitation.

While investors looking at the company’s as-reported returns might see a weak returning home builder, once Uniform Accounting adjustments are made, it’s apparent that the company is a savvy developer generating significant cash flows.

Savills (SVS:GBR) is another great example of as-reported metrics mis-representing the company’s profitability.

If Third Avenue was looking at as-reported numbers, they’d think they were investing in a real estate management and advisory firm that needed to get someone else’s advice on how to be more profitable.

The reality is that Third Avenue was buying a strongly positive high return recurring revenue machine.

Savills doesn’t have a 6% ROA, it is actually at 34%. Third Avenue’s analysts are identifying a strongly returning company that has good visibility they can benefit from.

The list goes on from there, for names ranging from Rayonier (RYN) and Interfor (IFP:CAN), to CK Hutchison (1:HKG) and Lennar (LEN).

If Third Avenue was analyzing as-reported metrics, it might look like they were just looking for hopeful turnarounds, as opposed to fundamentally misunderstood and mispriced companies, because they look like bad companies and poor investments. 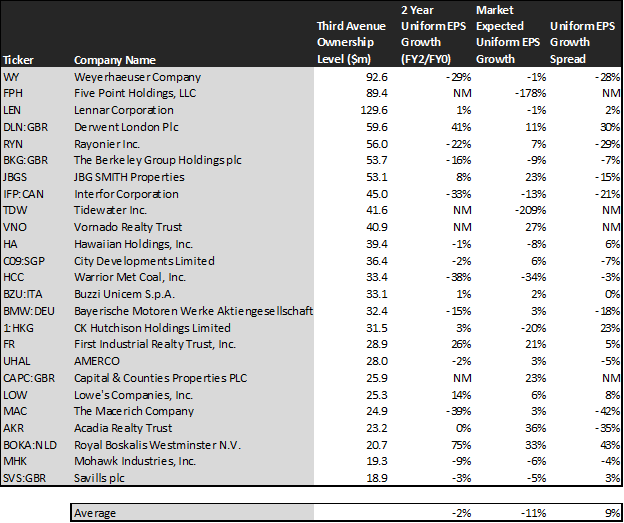 The average company in the US is forecast to have 5% annual Uniform Accounting earnings growth over the next 2 years. Third Avenue’s holdings are forecast by analysts to be well below that, shrinking at 2% a year the next 2 years, on average.

But on average, the market is pricing these companies to actually shrink earnings by 11% a year.

This type of breakdown makes sense.

Third Avenue is a deep value investing fund. It is looking for names that the market has significant pessimism about, which 11% expected shrinkage shows.

To find names the market is that pessimistic about, Third Avenue is not likely to find names that are intrinsically growing at the same time.

Third Avenue’s goal is for the market to recognize that things aren’t as bad for these companies as the market thinks, and then the gap in valuations will close.

These are the kinds of companies that deep value investors love.

They are “heads I win, tails I don’t lose” type of names because the market is already so pessimistic that the pessimism starts to offer a floor for valuations.

That being said, without Uniform numbers, the GAAP numbers would leave everyone confused about if this was the case or not.

One example of a company in the Third Avenue portfolio that the market is mispricing is CK Hutchison (1:HKG).

CK Hutchison’s analyst forecasts have 3% Uniform earnings growth built in, but the market is pricing the company to have earnings shrink by 20% earnings each year for the next two years.

Another company with big dislocations is Derwent London (DLN:GBR). This might look like a company with high market expectations initially.

However, the company is actually forecast for Uniform EPS to grow by 41% a year. While expectations are high, if it can deliver higher growth, there’s more upside.

Yet another is the fund’s largest holding, Lowe’s (LOW), which is priced for a 6% increase in Uniform earnings, when they are forecast to grow earnings by 14% a year.

That being said, sometimes investors miss what Uniform Accounting is identifying. For several of Third Avenue’s holdings, the company may be making a bet on something other than earnings growth to justify their investment.

JBG SMITH (JBGS) is a good example of this. The company is forecast to see Uniform earnings grow by 8% a year going forward. However, the market is pricing the company for 23% annual earnings growth.

It wouldn’t be clear under GAAP, but unsurprisingly, Uniform Accounting and a fund focused on seeing through the noise of as-reported accounting lines up.

Because this is the largest individual stock holding of Third Avenue Management, we are featuring the tearsheet of Weyerhaeuser Company.

As our Uniform Accounting tearsheet for Weyerhaeuser Company (WY) highlights, Weyerhaeuser’s Uniform P/E trades at 37x, above corporate average valuation levels and its own history.

High P/Es require high EPS growth to sustain them. In the case of Weyerhaeuser, the company has recently had strong 41% Uniform EPS growth.

Although Wall Street stock recommendations and valuations generally have a poor track on reality, their analysts have a stronger understanding on near-term financial forecasts such as revenue and earnings.

As such, we use Wall Street GAAP earnings estimates as a starting point for our Uniform Earnings forecasts. When we do this, we can see that Weyerhaeuser is forecast to see Uniform EPS shrinkage of 99% in 2020 followed by 5,635% growth in 2021.

Based on current stock market valuations, we can back into the required earnings growth rate that would justify $30 per share. These are often referred to as market embedded expectations.

In order to meet the current market valuation levels of Weyerhaeuser Company, the company would have to have Uniform earnings shrink by 1% each year over the next three years.

What Wall Street analysts expect for Weyerhaeuser’s earnings growth is significantly below than what the current stock market valuation requires.

To conclude, Weyerhaeuser Company’s Uniform earnings growth is below peer averages in 2020. In addition, the company is trading above average peer valuations

Together with their high earnings power with 2x corporate averages, these signal a low credit risk in the future.