Last year has been tough for many investors and hedge funds. Most of them even performed worse than the market.

But stars only shine in the darkness, and AQR Capital Management was surely one of these shining stars in 2022.

The fund had its best year since its inception in a market environment where many recorded massive losses.

Founded by Cliff Asness and friends in 1988, AQR is one of the largest hedge funds in the world.

Since its inception, the fund has been focused on quantitative strategies like algorithms and computerized models to trade stocks, bonds, currencies, and commodities.

That makes sense because the name AQR stands for “Applied Quantitative Research”.

Asness and his team’s focus on quantitative research led them to build one of the first hedge funds to implement highly regarded factor models which were introduced by Fama and French.

Their strong computer science and finance background were the main reason for the firm’s success in its early years, and they were called “Gurus” by the financial media.

Utilizing these quantitative strategies, the fund quickly became a well-known success story in the investment industry.

Even though its prestige has been hurt by the financial crisis in 2008, the fund continued to grow and expand in the following years.

However, it has been struggling for the past 5 years. Its quantitative strategies have been consistently underperforming for such a long time.

But as 2022 closes, AQR gets to have a sigh of relief since it had its best year since its inception.

Additionally, not just its flagship funds but pretty much every fund of AQR crushed the market last year.

Net return for its longest-running fund was 55% for the year, and its many other funds recorded massive gains as well.

Let’s have a look at the fund and see if it is well-positioned for the year ahead as well. 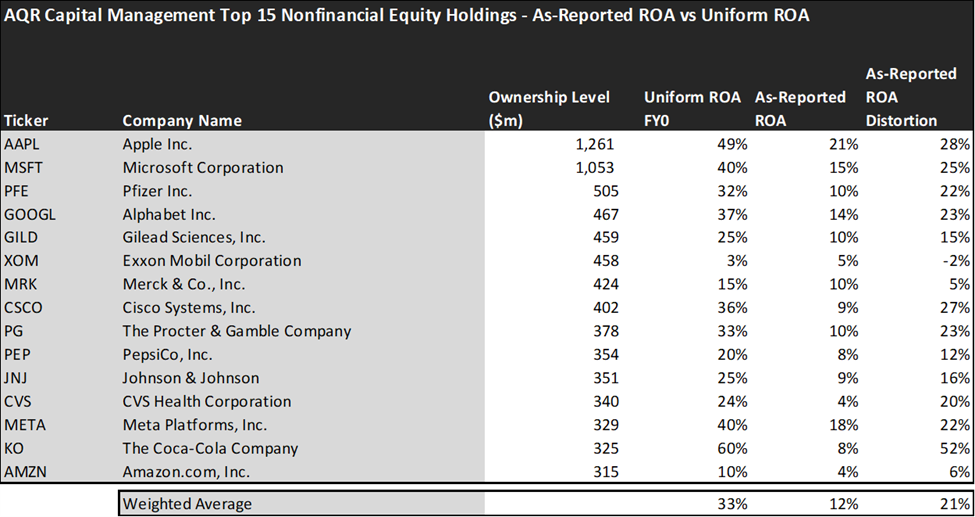 Looking at as-reported accounting numbers, investors would think that investing in AQR Capital Management is not really rewarding.

On an as-reported basis, many of the companies in the fund are just average performers. The average as-reported ROA for the top 15 holdings of the fund is 12%, which equals the U.S. corporate average of 12%.

However, once we make Uniform Accounting adjustments to accurately calculate the earning power, we can see that the average return in AQR Capital Management’s top 15 holdings is actually 33%.

As the distortions from as-reported accounting are removed, we can see that Apple Inc. (AAPL) isn’t a 21% return business. Its Uniform ROA is 49%.

Meanwhile, The Coca-Cola Company (KO) looks like an 8% return business, but this massive beverage corporation actually powers a 60% Uniform ROA. 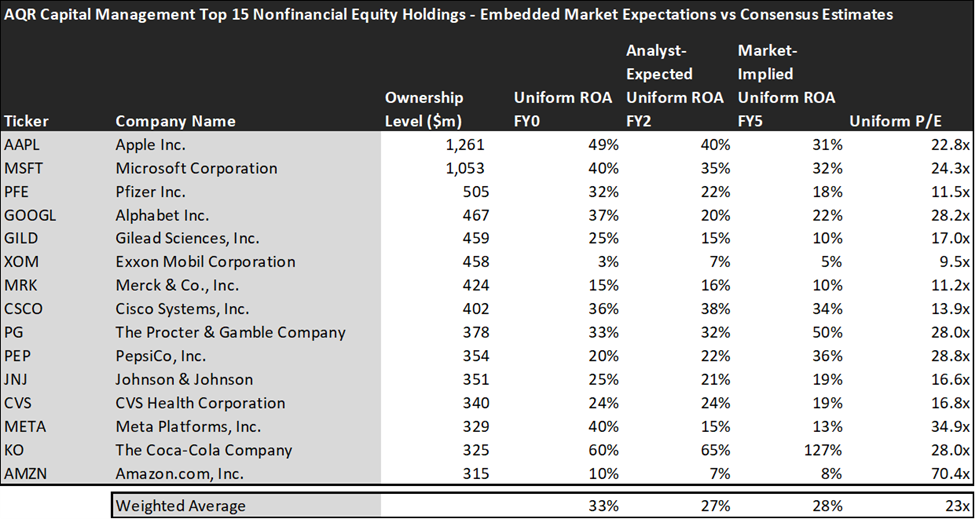 Embedded Expectations Analysis of AQR Capital Management paints a clear picture. Over the next few years, Wall Street analysts expect the companies in the fund to decline in profitability and the market agrees.

Analysts forecast the portfolio holdings on average to see Uniform ROA fall to 27% over the next two years. At current valuations, the market agrees with the analysts and expects a 28% Uniform ROA for the companies in the portfolio.

For instance, Alphabet (GOOGL) returned 37% this year. Analysts think its returns will significantly drop to 20%. And at a 28.2x Uniform P/E, the market expects a decline in profitability and is pricing Uniform ROA to be around 22%.

Overall, AQR Capital Management’s portfolio is composed of high-quality companies that can deliver strong returns in the long term. But investors should consider that AQR is focused on quantitative strategies in which the valuation and pricing of securities are highly important factors. That is why investors should analyze carefully and then make an investment decision on whether to invest or not.

Read on to see a detailed tearsheet of one of AQR Capital Management’s largest holdings.

As the Uniform Accounting tearsheet for Pfizer Inc. highlights, its Uniform P/E trades at 11.2x, which is below the global corporate average of 18.4x, and around its historical average of 11.5x.

Low P/Es require low EPS growth to sustain them. That said, in the case of Pfizer Inc., the company has recently shown 148% Uniform EPS growth.

We take Wall Street forecasts for GAAP earnings and convert them to Uniform earnings forecasts. When we do this, Pfizer Inc.’s Wall Street analyst-driven forecast is for EPS to grow by 38% in 2022 and shrink by 36% in 2023.

Furthermore, the company’s return on assets was 32% in 2021, which is 5x the long-run corporate averages. Also, cash flows and cash on hand consistently exceed its total obligations—including debt maturities and CAPEX maintenance. Moreover, its intrinsic credit risk is 30bps above the risk-free rate. Together, these signal low dividend risks and low credit risks.

Lastly, Pfizer Inc.’s Uniform earnings growth is above peer averages, and in line with peer valuations.