This fund manager faced a scandal its peers would normally punish a firm for, UAFRS shows its analysts have come out swinging post-crisis

It is never a good sign when a company needs to change its name because of a scandal. But sometimes the company that emerges keeps what made it great, and can now leave behind the legacy of its prior poor decisions.

This investment manager was one of the most successful firms in the industry in its heydays but poor decisions brought it low. It’s kept its smart analyst team, but moved on from its founder to try to get past its prior scandals.

Some investors might worry that with the fund’s distractions the last 5 years, analysts had lost focus. In reality, UAFRS-based financial metrics help make sense of the stocks the fund is buying and how they continue to be the right companies to generate alpha for this stalwart of the industry.

But generally, those name changes occurred early in a company’s life. The company rebranded before it took off, to better reflect the company’s offering.

Sometimes though, a company needs to rebrand for entirely different reasons.

Two of the most famous scandals of the past 20 years were Enron and Valeant Pharmaceuticals, and both led to companies changing their names to distance themselves from the bad press and history of prior decisions.

Enron’s accounting fraud didn’t just bring down the company, it brought down one of the “Big Five.”

While the scandal brought down the accounting firm, it didn’t bring down its prior subsidiary, a very successful consulting and outsourcing business, Andersen Worldwide. That business had spun out from Arthur Andersen just before the crisis, and was quick to rebrand in the midst of the crisis to distance itself.

You may have heard of the firm, one of the largest consulting firms in the world: Accenture.

Similarly, Valeant’s crisis almost brought down the firm. There were real concerns for investors about how real the company’s revenues were, and if the company could handle the mountain of debt it had built in its roll-up.

After stabilizing the business, the new management team understood they could never rebuild the Valeant brand. It was better just to walk away from it.

Hence, why you probably might have heard the name Bausch Health, after Bausch + Lomb, Valeant’s largest business segment. That’s the name Valeant rebranded itself as.

That need to rebrand after a crisis to move on from the past isn’t something that is exclusive to the public companies you can invest in. Investment firms sometimes need to do the same.

Daniel Och is a legend in the hedge fund world. He founded Och Ziff in 1994 after 11 years at Goldman Sachs, and he left having run the firm’s prop trading desk.

He built Och Ziff into a $50 billion assets under management (AUM) behemoth and took the company public. He was one of the first to see the opportunity of bringing institutional money to the land of hedge funds, such as pensions, and endowments.

He revolutionized the industry in many ways and had an impressive track record in his day job too, running a hedge fund.

But after the late 2010 scandals from the company’s African government bribes, the company faced an issue: continue on with the name and founder, that was now tarnished with a scandal that its institutional investors would not be comfortable signing off on, or start anew.

The firm’s decision was the latter. Och was transitioned out of the firm and the company was rebranded as Sculptor Capital. But the investment team, the people who had made the company one of the “smartest groups in the room” even in the world of hedge funds, was kept.

These were the young analysts and portfolio managers that had helped Och Ziff, now Sculptor, become a powerhouse in not just equity investing, but also credit and real estate. The investors that had understood how to identify mispriced investments and successfully profit from them, even with a bulls-eye on their backs as one of the biggest players in the space.

But considering the challenging last few years of the company, one can’t help but wonder if the team might have lost its focus and if Sculptor has lost its edge.

We’ve conducted a portfolio audit of Sculptor’s top holdings, based on their most recent 13-F.

Unsurprisingly, while Sculptor’s investments’ as-reported metrics make it look like Sculptor has lost its edge, in reality these investors appear to know exactly what they’re doing, once Uniform Accounting metrics are reviewed.

It’s clear that when Sculptor’s team is making their investment decisions, they’re making decisions based on the real data. 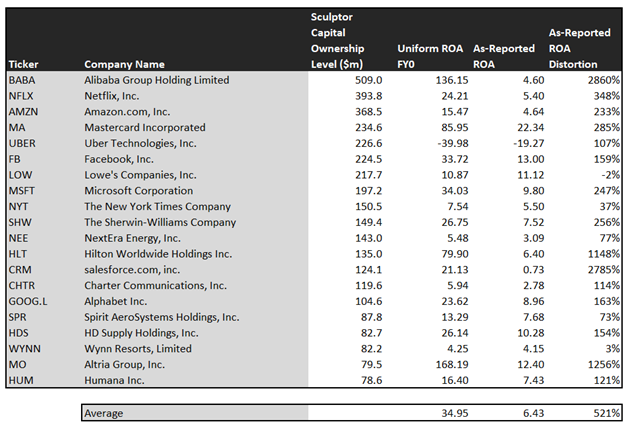 On an as-reported basis, many of these companies are poor performers with returns below 7%, and the average as-reported return on assets (ROA) is slightly below 7%.

In reality, the average company in the portfolio displays an impressive average Uniform ROA at 35%. That’s above corporate average returns currently.

Once we make Uniform Accounting (UAFRS) adjustments to accurately calculate earning power, we can see that the returns of the companies in Sculptor’s portfolio are much more robust.

Once the distortions from as-reported accounting are removed, we can realize that Alibaba (BABA) doesn’t have a 5% ROA, it is actually at 136%. Alibaba, Sculptor’s largest investment, is a strongly profitable e-commerce company.

Amazon doesn’t have a 5% ROA, it is actually at 15%. Sculptor appears to understand that market expectations for the company, thinking it’s a low-return business, is completely incorrect.

The list goes on from there, for names ranging from Mastercard (MA) and Facebook (FB), to Hilton Worldwide (HLT), Salesforce.com (CRM), and Altria (MO).

If Sculptor were focused on as-reported metrics, it would never pick most of these companies because they look like anything but the companies that are likely to produce strong returns. 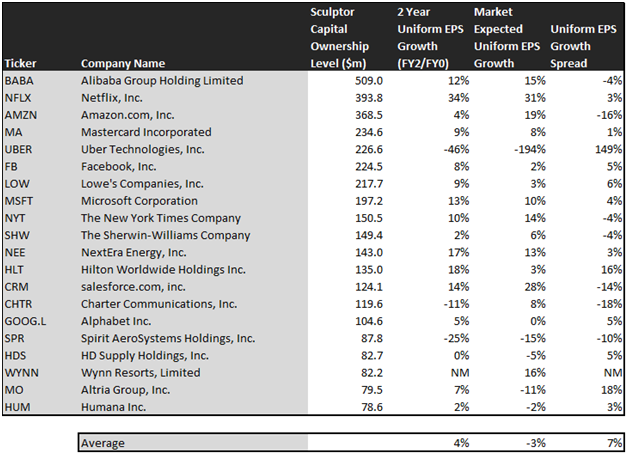 But while growth is average, market expectations are much more negative. Sculptor is not just finding high quality companies, it is finding mispriced companies.

One example of a company in the Sculptor portfolio that has growth potential that the market is mispricing is Hilton Worldwide (HLT). Hilton’s Wall Street analyst forecasts have 18% Uniform earnings growth built in, but the market is pricing the company to have earnings grow by 3% each year for the next two years.

Another company with similar dislocations is Altria (MO). Expectations are incredibly pessimistic, for 11% shrinkage in earnings. However the company is actually forecast for Uniform EPS to grow by 7% a year. If the company could just not shrink earnings, it is significantly mispriced, but it is forecast to have earnings outpace market average growth rates.

Yet another is the fund’s largest holding, Lowe’s (LOW), is priced for 3% growth in Uniform earnings, when the company is forecast to grow by earnings by 9% a year.

That being said, there are a few companies we’d recommend Sculptor look at again before holding.

Spirit Aerosystems (SPR) is forecast to see Uniform earnings shrink by 25% a year going forward. However, the market is pricing the company for 15% annual earnings shrinkage.

But many of Sculptor’s holdings look like a high quality, undervalued set of stocks with businesses displaying strong earning power. It wouldn’t be clear under GAAP, but unsurprisingly Uniform Accounting sees the same signals that Sculptor’s savvy analysts appear to see.

As our Uniform Accounting tearsheet for Alibaba Group Holding Limited (BABA:USA) highlights, Alibaba’s Uniform P/E trades at 26.7x, above the corporate average valuation levels and its own recent history.

High P/Es require high EPS growth to sustain them. In the case of Alibaba, the company recently had a 30% Uniform EPS growth.

As such, we use Wall Street GAAP earnings estimates as a starting point for our Uniform earnings forecasts. When we do this, we can see that Alibaba is forecast to see robust Uniform EPS growth of 47% in 2020 followed by a 15% shrinkage in 2021.

Based on current stock market valuations, we can back into the required earnings growth rate that would justify $210 per share. These are often referred to as market embedded expectations.

In order to meet the current market valuation levels of Alibaba, the company would have to grow Uniform EPS by 15% each year over the next three years.

What Wall Street analysts expect for Alibaba’s earnings growth is far less than what the current stock market valuation requires.

The company’s earning power, based on its Uniform return on assets calculation, is 23x the corporate average returns. Furthermore, with cash flows and cash on hand consistently exceeding debt obligations, Alibaba has low credit and dividend risk.

To conclude, Alibaba’s Uniform earnings growth and valuation is both trading above peer averages in 2019.