This investor has made a career for betting on the little guy, Uniform Accounting shows why he keeps making winning bets

This great investment has focused on investing in smaller things with bigger upside in both his personal and professional lives. The bet that small things can make big impacts has paid off for him for the past 50 years and more.

He’s always had a specific strategy when investing small, but using GAAP as-reported financial metrics, the investments in his fund’s portfolio look like he’s not following his self-stated strategy.

Rhode Island is the smallest of the 50 states in the US. However, that hasn’t prevented it from making a major impact on the future of the United States, and on history.

Rhode Island was the first state to declare independence from Great Britain.

Samuel Slater also chose Rhode Island to start the industrial revolution in the US. He helped power future US economic growth by deploying the first US water-powered cotton mill in the state.

Rhode Island was also the first US state to legally abolish slavery. Furthermore, representatives of the state were one of the major drivers behind the adoption of the Bill of Rights, the first ten amendments to the US Constitution, focusing on rights that are protected from laws.

For such a small state, Rhode Island has certainly had an outsized impact on American history.

So it’s unsurprising that Chuck Royce would be so deeply connected to the state’s history.

Royce is well travelled in the state’s circles. He is a Brown alumni, and is widely credited with saving Westerly, and helping it regain its charm as a summertime vacation oasis with his rescue of the Watch Hill resort.

Royce has a long history of understanding that a small package can yield outsized returns.

He has been at the forefront of smallcap and microcap investing since he took over what is now called Royce funds, back in 1972.

One of the core premises of his and his firm’s investment strategy is to invest in high quality, value smallcap stocks.

The focus on smallcap is because Royce knew what Fama and French eventually proved two decades later in 1992, smaller companies outperform larger companies. It is easier for a smaller company to double their client base than for a large company to find twice as many customers.

The idea behind a focus on quality is because quality is even more important in the smallcap world than elsewhere, because the margin of safety for smallcap companies, which are less diverse and generally have smaller safety nets, is more reduced.

Having high returns and low leverage reduces the risk that a smallcap idea blows up.

Finally, a focus on value makes sense, as like Buffett or Graham, Royce talks about wanting to get into companies at a smart price that he’d like to own forever.

That being said, analyzing Royce’s portfolio, it’s not obvious that the fund invests in either high quality or undervalued names using as-reported metrics.

We’ve conducted a portfolio audit of Royce’s top holdings, based on their most recent 13-F, excluding ETF holdings.

Unsurprisingly, while Royce’s investments’ as-reported metrics make it look like Royce has lost its way, in reality they appear to be higher quality names, once Uniform Accounting metrics are reviewed.

It’s clear that when Chuck and his portfolio managers are making their investment decisions, they’re making decisions based on the real data. 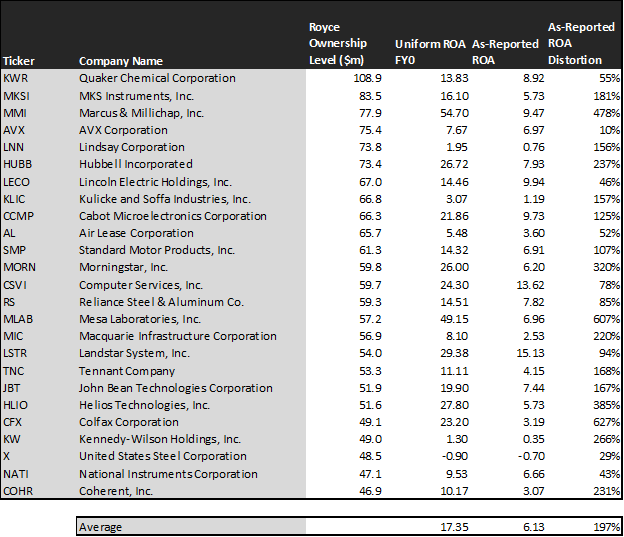 Using as-reported accounting, investors would think Royce has lost its way and wandered away from the mandate that made it such a massive smallcap investing success.

On an as-reported basis, many of these companies are poor performers with returns below 9%, and the average as-reported return on assets (ROA) is right at 6%.

In reality, the average company in the portfolio displays an impressive average Uniform ROA at 17%. That’s above corporate average returns currently.

Once we make Uniform Accounting (UAFRS) adjustments to accurately calculate earning power, we can see that the returns of the companies in Royce’s portfolio are much more robust.

Once the distortions from as-reported accounting are removed, we can realize that Quaker Chemical (KWR) doesn’t have a 9% ROA, it is actually at 14%. Quaker, Royce’s largest investment, is a strongly profitable chemical company.

Marcus & Millichap doesn’t have a 10% ROA, it is actually at 55%. Royce appears to understand that market expectations for the company, thinking it’s a low return business, is completely incorrect.

The list goes on from there, for names ranging from Hubbell (HUBB) and Cabot Microelectronics (CCMP), to Morningstar (MORN), Mesa Labs (MLAB), and Helios Technologies (HLIO).

If Royce were focused on as-reported metrics, it would never pick most of these companies because they look like anything but the high-quality companies that are the fund group’s mandate. 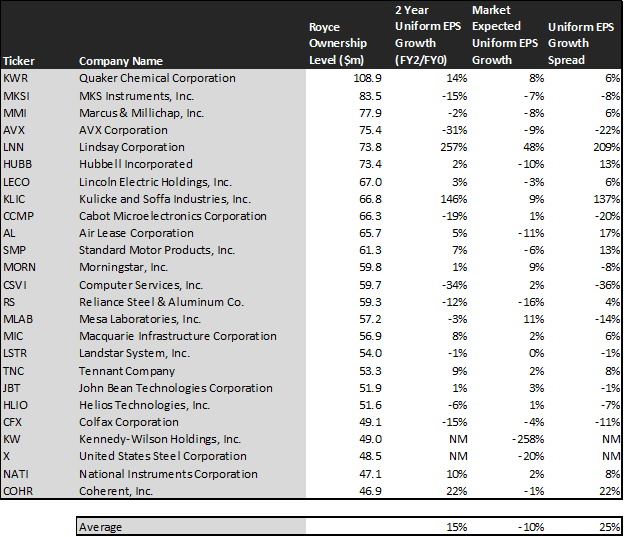 The average company in the US is forecast to have 5% annual Uniform Accounting earnings growth over the next 2 years. Royces holdings are forecast by analysts to outpace that, growing at a robust 15% a year the next 2 years, on average.

Royce is not just finding high quality, higher growth companies though, it is finding mispriced companies.

Another company with similar dislocations is Lindsay Corp (LNN). Expectations may look high with market expectations for a 48% growth in earnings. However the company is actually forecast for Uniform EPS to grow by 257% a year. While expectations are high, if it can deliver higher growth, there’s more upside.

Yet another is the fund’s largest holding, Air Lease (AL), is priced for an 11% shrinkage in Uniform earnings, when the company is forecast to grow by earnings by 5% a year.

That being said, there are a few companies we’d recommend Royce look at again before holding.

Computer Services (CSVI) is forecast to see Uniform earnings shrink by 34% a year going forward. However, the market is pricing the company for 2% annual earnings growth.

But many of Royce’s holdings look like a high quality, undervalued set of stocks with businesses displaying strong earning power. It wouldn’t be clear under GAAP, but unsurprisingly Uniform Accounting sees the same signals that Royce appears to.

As our Uniform Accounting tearsheet for Quaker Chemical Corporation (KWR:USA) highlights, Quaker Chemical’s Uniform P/E trades at 26.7x, above the corporate average valuation levels, but below its own recent history.

High P/Es require high EPS growth to sustain them. In the case of Quaker Chemical, the company recently had a 26% Uniform EPS growth.

As such, we use Wall Street GAAP earnings estimates as a starting point for our Uniform Earnings forecasts. When we do this, we can see that Quaker Chemical is forecast to only see Uniform EPS of -58% in 2019 followed by 210% in 2020.

Based on current stock market valuations, we can back into the required earnings growth rate that would justify $158 per share. These are often referred to as market embedded expectations.

In order to meet the current market valuation levels of Quaker Chemical, the company would have to grow Uniform EPS by 8% each year over the next three years.

What Wall Street analysts expect for Quaker Chemical’s earnings growth is far above than what the current stock market valuation requires.

The company’s earning power, based on its Uniform return on assets calculation, is at more than 2x corporate average returns. Furthermore, with cash flows and cash on hand consistently exceeding debt obligations, Quaker Chemical has low credit and dividend risk.

To conclude, Quaker Chemical’s Uniform earnings growth is below peer averages in 2019. Also, the company is trading above peer valuations.