This key economic indicator continues to be a tailwind for U.S. valuations

Since the United States formally began inflation targeting in 2012, the best economic analysts in the country have failed to accurately predict inflation.

That’s not necessarily a bad thing—it may actually be helping prop up long-term market valuations.

While most people might think the United States began targeting a 2% annual inflation rate beginning in 2012, that’s not exactly the case.

It’s true that then-Fed Chair Ben Bernanke formally announced that our country was inflation targeting in 2012, but the Federal Reserve has been doing just that behind closed doors for nearly two decades prior.

In fact, the idea of inflation targeting can be traced back to 1990 when New Zealand was suffering from consistent high single-digit to low double-digit inflation.

The country’s Reserve Bank took drastic measures to drop the rate to less than 2% just two years later. While there were some short-term frictional problems with issues like unemployment, the program was wildly successful.

Within a few years, several other major economies decided to follow suit, with countries like Australia, the United Kingdom, and Canada adopting 0%-2% inflation targets in the following years.

The idea first made it to the States in the middle of 1996 during a closed-door FOMC meeting, when Fed governor Janet Yellen and then-Chairman Alan Greenspan got into a spirited debate about the topic.

It’s widely believed that as early as 1996, the Fed began secretly targeting 2% inflation in order to avoid spurring negative sentiment like what happened in New Zealand.

By the time Bernanke officially announced the target, we had already managed to keep inflation near 2% for many years.

A lower-inflation world tends to be a boon to investors, who will see less of their returns disappear by virtue of keeping up with rising costs.

As a refresher, both lower taxes and low interest rates (typically anything below 4% is considered low) help support higher market valuations. We’ve had several consecutive years with both of these conditions, and it helped support our recent historically long bull market. 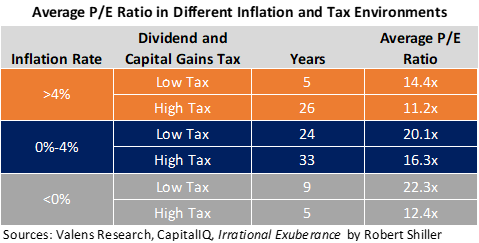 However, it’s not just low inflation rates that boost market valuations, it’s when inflation ends up being lower than expected.

In other words, we experience a market tailwind when investors are able to keep more of their returns than they anticipated to begin with.

Around the country, we have several organizations that provide quarterly inflation estimates for different periods in the future—monthly all the way up to 10 years.

What we’ve found is that these organizations, which include the Cleveland Federal Reserve and the University of Michigan, tend to overshoot their inflation expectations.

As you can see, practically since the Fed “officially” began inflation targeting at 2%, inflation has come in lower than expectations.

This has been a major support to valuations through the second half of this historic bull run, and it is likely to help us recover from recent market turmoil so long as inflation remains in check.