This quant fund’s fees are sky high, and its performance backs it up

Some of them deserve it, as they bring incredible returns. Many others collect fees for sub-par performance.

Among the most expensive and the most successful is D.E Shaw & Co. Let’s have a look at the fund’s top holdings using Uniform Accounting and evaluate if it provides value to its investors.

The active manager world is one of haves and have-nots. Those with a good track record get cash inflows. When you haven’t had a good performance, no one will invest in you.

If you’ve proven your fund can beat the market, pretty much no matter what you charge in fees, people will pay for getting to ride on your coattails.

The common charging structure in the actively managed funds is changing 2% management fees and 20% performance fees, called 2 and 20. Some are trying to win investors by shrinking down to 1% and 10%.

However, some of the big titans, like Renaissance, Point72, Bridgewater, and others in rarified air, go the opposite direction, charging 30% or more.

D.E. Shaw was right in that same area. 3 of its flagship funds always charged between 25%-35% from performance fees.

Its investment approach and successful track record make it stand out.

The fund uses various systematic strategies based on quantitative and computational techniques developed over 30 years of research and trading.

Thanks to these strategies, one of its flagship funds, the D.E Shaw Composite Fund, has generated an annualized net return of around 12% since its inception in 2001.

The fund also managed to deliver impressive returns last year and as returns are making its investors happy, the firm raised its fees.

Now, D.E. Shaw charges as much as a 40% performance fee. And investors are still desperate to pile into its funds.

Let’s take a look at D.E. Shaw & Co. through the Uniform Accounting perspective to see what they’re invested in that has made people so excited. 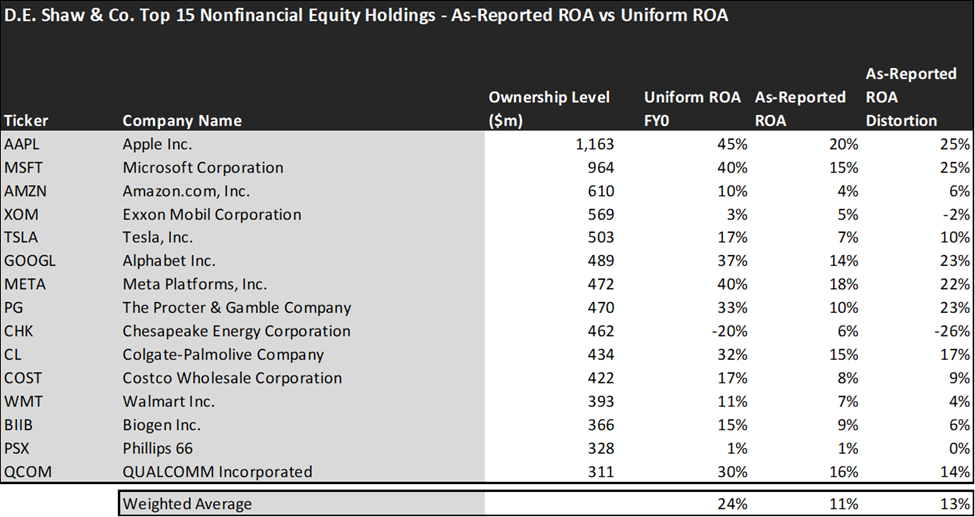 Using as-reported accounting, investors would think the D.E. Shaw & Co. is just average and their returns are not really rewarding considering the management and performance fees.

On an as-reported basis, many of the companies in the fund are average performers. The average as-reported ROA for the top 15 holdings of the fund is 11%, which is around the U.S. corporate average. This shows that investors are paying loads of fees for a portfolio of average companies.

However, once we make Uniform Accounting adjustments to accurately calculate earning power, we can see that most companies in D.E. Shaw & Co. are stronger than investors might think.

As the distortions from as-reported accounting are removed, we see that Apple (AAPL) doesn’t have 20% returns. It actually has a 45% Uniform ROA.

Similarly, Microsoft’s (MSFT) Uniform ROA is 40%, not the 15% figure as-reported metrics would suggest. 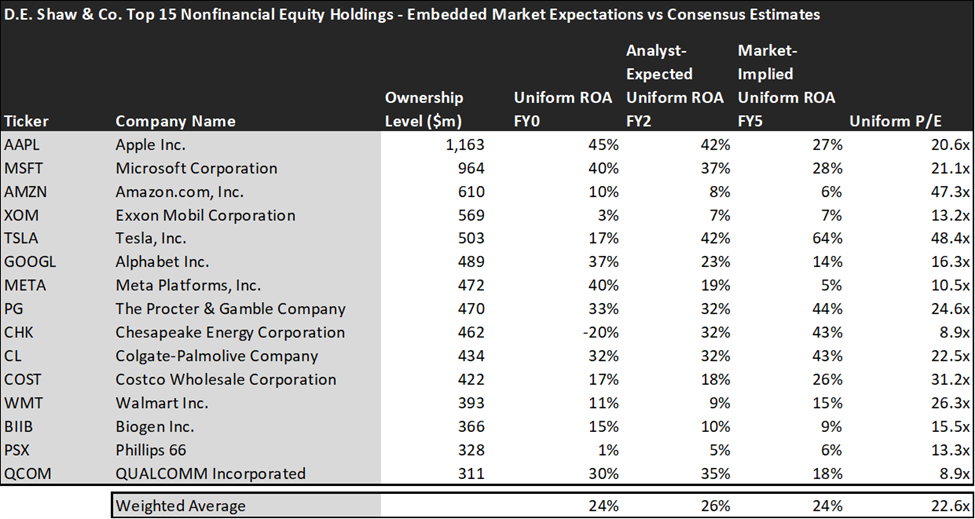 Embedded Expectations Analysis of D.E. Shaw & Co paints a clear picture. Over the next few years, Wall Street analysts expect the companies in the fund to slightly improve in profitability, while the market expects profitability to slightly decline.

Analysts forecast the portfolio holdings on average to see Uniform ROA rise to 26% over the next two years, while the market is pricing to see returns fall to 24%.

Qualcomm is another good example. It’s already a high-quality company with 30% returns, and analysts think Uniform ROA will rise to 35%. On the other hand, the market is pricing Qualcomm to see Uniform ROA fall to just 18%.

Overall, the portfolio consists of high-quality names that can help D.E. Shaw continue its successful track record. Given that a lot of these companies are trading inexpensively, it makes sense that many of them will beat market expectations.

Read on to see a detailed tearsheet of one of D.E. Shaw & Co’s largest holdings.

As the Uniform Accounting tearsheet for Microsoft Corporation highlights, its Uniform P/E trades at 21.1x, which is above the global corporate average of 18.9x, but below its historical average of 23.9x.

High P/Es require high EPS growth to sustain them. That said, in the case of Microsoft Corporation, the company has recently shown 1% Uniform EPS growth.

We take Wall Street forecasts for GAAP earnings and convert them to Uniform earnings forecasts. When we do this, Microsoft Corporation’s Wall Street analyst-driven forecast is for EPS to grow by 3% and 16% in 2023 and 2024, respectively.

Furthermore, the company’s return on assets was 40% in 2022, which is 7x the long-run corporate averages. Also, cash flows and cash on hand consistently exceed its total obligations—including debt maturities and CAPEX maintenance. Moreover, its intrinsic credit risk is 30bps above the risk-free rate. Together, these signal low credit risks.