This “recession in name only” has one sure way out

Lately, economists and news outlets everywhere have been pounding the table on a potential crash. Now that gross domestic product (“GDP”) has fallen for two consecutive quarters – the technical definition of a “recession” – their cries have grown even louder.

Inflation eats into consumer wallets, economic growth, and if left unchecked could spill out into an economic crisis. However, most pundits are overlooking a key counter to inflation that is set to play out over the next few years.

Today, we are going to talk about how investment into supply chains will counter this current “recession in name only.”

Over the last two quarters, economic growth has been negative, the traditional measure of a recession. But as we’ve said before, this is a recession in name only (“RINO”).

If we look at nominal GDP, which is calculated based on current market prices, we can see that the economy has grown 9% so far this year. That’s higher than 2019 levels.

The only reason real GDP numbers are shrinking is due to inflation.

Over the past few months, we’ve highlighted the similarities between the current U.S. economy and the post-World War II environment. Huge demand and limited supply are causing inflation… not economic weakness, like in Weimar, Germany in the 1920s or Zimbabwe in 2007.

We attribute this inflation to companies’ inability to meet rising demand.

Investment across the economy has been so strong across the board that the S&P 500 has seen greater growth in capital expenditures than stock repurchases this quarter. The last time that happened was in the first quarter of 2021.

Capital expenditures have increased 20% compared to this time last year. Share repurchases have grown only 10% in the same period.

It’s a very encouraging sign that large-scale investments are making their way across the economy.

Once again, demand is driving investment. Despite recession concerns, companies know that now is the time to put money to work.

While mainstream financial news points to inflation as the downturn end-all be-all, it’s just a symptom of a larger issue. The inflation we’re currently seeing is a product of rising demand and historical underinvestment.

As you’re likely aware, the COVID-19 pandemic exposed flaws in the supply chains of almost every industry.

Consumers wanted to spend after the pandemic, but production couldn’t keep up. Now, the economy is addressing those shortcomings.

Two weeks ago, we talked about how a huge demand spike after World War II led to recessionary concerns. Companies weren’t able to meet this demand and inflation accelerated.

Businesses back then realized they needed to invest, which ultimately benefited the economy.

The same thing is happening today. This trend isn’t only showing up in the news and in history books. The numbers back it up, too…

Over the past two decades, the economy’s property, plant, and equipment (“PP&E”) have become outdated.

Companies use a metric called gross PP&E to denote the value of their assets when they were new. Net PP&E tells us what those assets are worth today.

Take a look at the chart below, which shows the net-to-gross PP&E ratio. We can clearly see that the value of assets today is declining compared to their original value. And companies haven’t been replacing the old machines and buildings on their books. 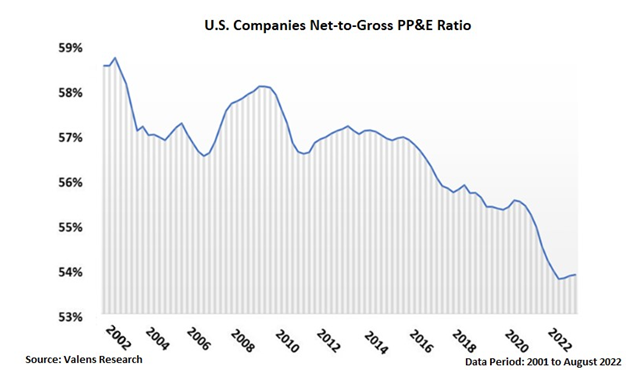 The Great Recession disrupted the usual reinvestment cycle, with cautious management teams putting off investment. The pandemic further exacerbated this issue. Now, companies have been caught flat-footed with old and underperforming assets.

But all of that is changing.

This is why we are so bullish on the “Supply-chain supercycle” – the idea that the U.S. is in the early innings of a massive supply-chain overhaul.

News is already starting to come out about increased investments in the supply chain, And we believe this is only the beginning.

Companies are investing in improvements to their supply chains and purchasing new assets. They know this demand won’t last forever… And they want to capitalize on the opportunity. But in order to do so, they need to improve their own businesses first.

They also know that even if they don’t improve their supply chains, competitors will. This competition will further drive investments as companies try to outdo one another.

These factors all point to positive signs for the economy as a whole. Supply-chain investment will lessen demand constraints and, in turn, lower inflation.

Expect economic growth as the supply chain supercycle plays out.