This “transformative” merger appears to have worked out just as poorly as Time Warner and AOL. Uniform Accounting questions that view

Transformative mergers rarely work out. The Time Warner/AOL merger was only unique due to the size of the failure, not due to the fact that it failed in the first place. Companies get overly optimistic about their outlook and how they can “transform” a business or market with a simple combination.

This company appears to have fallen to the same fate of other over-optimistic acquirers, but once the real accounting is uncovered, it’s clear the story isn’t as simple as that.

On January 10, 2000, America Online (AOL) and Time Warner announced what was then, and still is, the biggest merger in U.S. history. The combined company would be worth over $300 billion.

At the time, Time Warner and AOL executives were quoted as saying things like:

“This merger will launch the next Internet revolution”

“…the possibilities are truly endless.”

It was viewed as a transformative step for not just the companies, but for the future of the internet and content in the U.S., and maybe globally.

Time Warner would use its cable network to help AOL improve internet speeds, and take share. AOL would offer a streaming channel for Time Warner content.

Ten years later, AOL was spun back out, for just $3 billion.

It was, to quote Ted Turner, the largest investor in the combined firm “…one of the biggest disasters that [has] ever occurred to our country.”

What was meant to be transformative, ended up just destructive.

And as we mentioned in our letter on Tuesday, this isn’t a rare occurrence, it was just the scale of failure that was unprecedented. Companies try to transform themselves all the time by acquiring new technology, new services, new products, and fail.

In 2006, down the road from our Valens offices, Thermo Electron and Fisher Scientific announced another “transforming” merger in Waltham, MA.

At the time, press releases all sounded very similar to ones about the Time Warner/AOL merger.

The combination was to result in Thermo Electron bringing world-class products to Fisher’s “unparalleled customer access,” and strong products of its own.

Prior to the transaction, Thermo had poor profitability, and a relatively bleak outlook. It was clear the firm needed to revolutionize how it got products to customers and boost scale to improve pricing power. Fisher offered that, and the merger moved quickly.

And since then, it appears Thermo Fisher might just be a rerun of Time Warner/AOL. 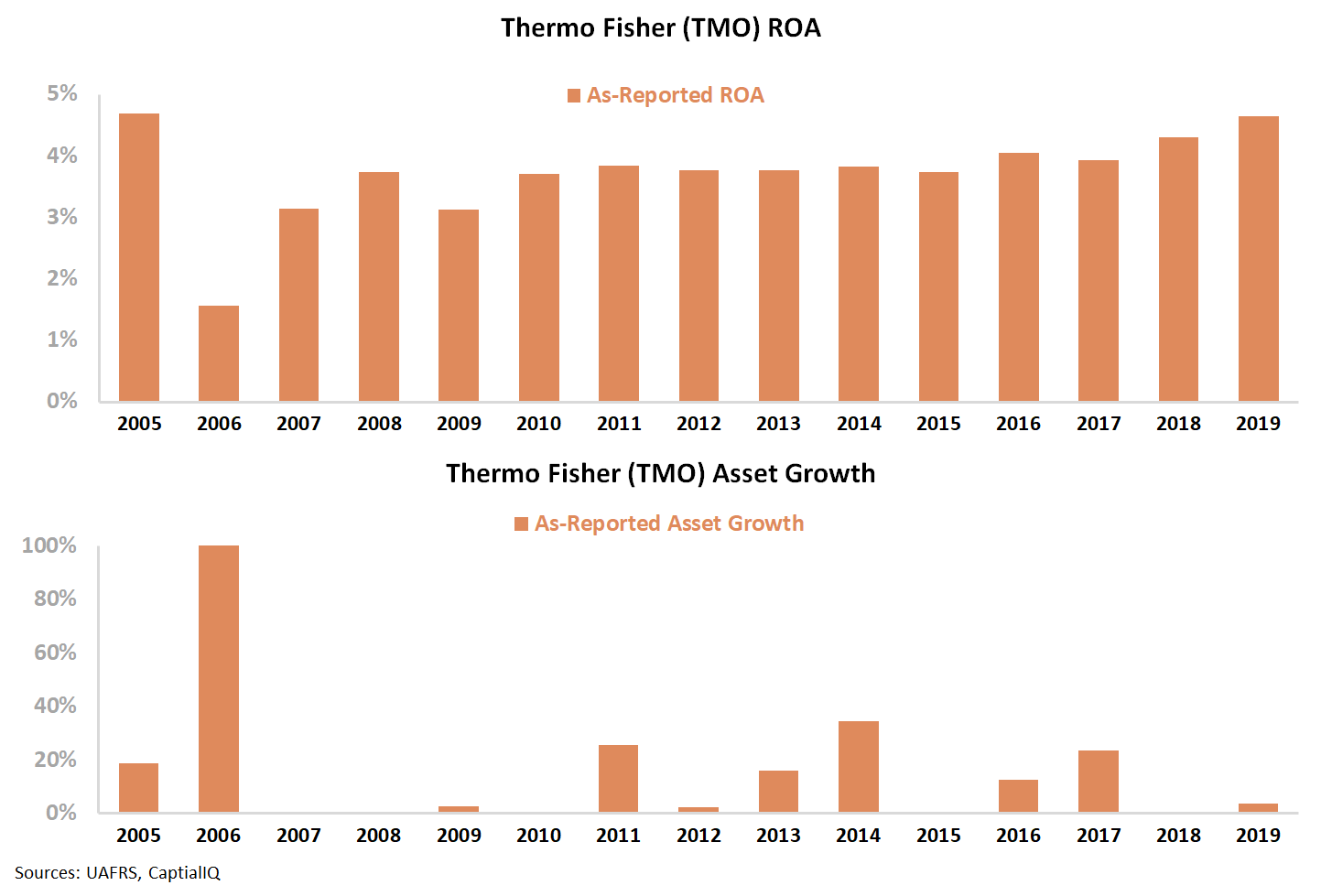 The firm has seen as-reported Return on Assets (ROA) levels largely remain below, or at levels seen in 2005. There were years of continued growth, but Thermo Fisher appears to have been growing a low profitability business. With returns near or below the cost of capital, growth like that can actually destroy value.

However, in that time, Thermo Fisher has seen shares rise over 5x faster than the market.

How did a company destroying value generate returns like that?

Because the company wasn’t destroying value.

When instead looking at Uniform ROA, it is immediately clear that the combined firm actually did what it set out to do: 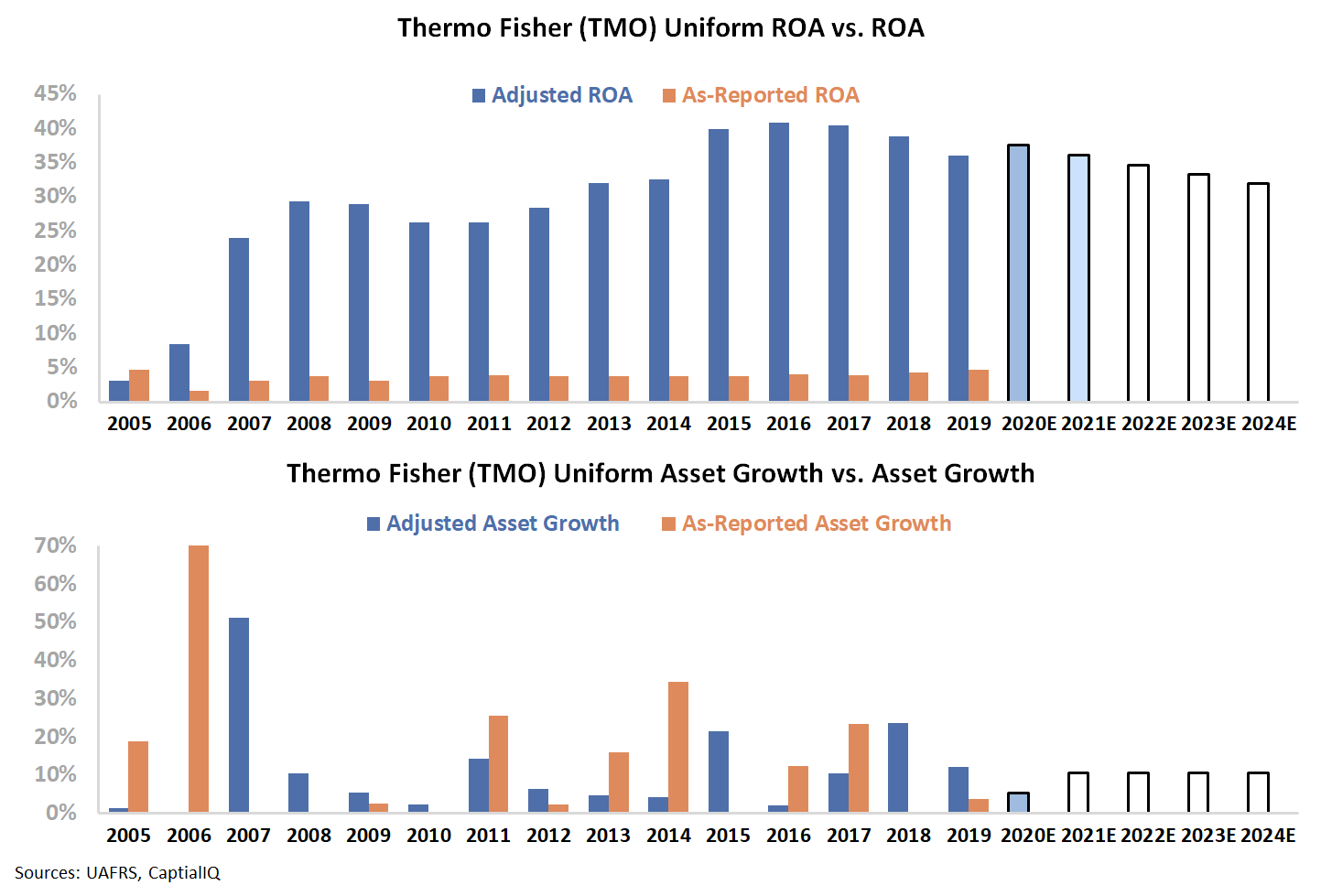 Growth trends have been similar to as-reported asset growth trends, and the firm has actually driven Uniform ROA to highs well over 25%. The combined company did create value, and as Thermo Fisher has reinvested in the business, it has created massive value for shareholders.

As a result, even after rising 5x the market, share prices don’t reflect just how strong Thermo Fisher actually is. Investors are misled as to what kind of business this combined firm is, and the quality of the investment, and TMO is still cheap because of this. Under UAFRS it becomes clear this name could be a hidden value.

Thermo Fisher Scientific Inc. Embedded Expectations Analysis – Market expectations are for declining Uniform ROA, but management is excited about their deals, and confident about their performance and positioning 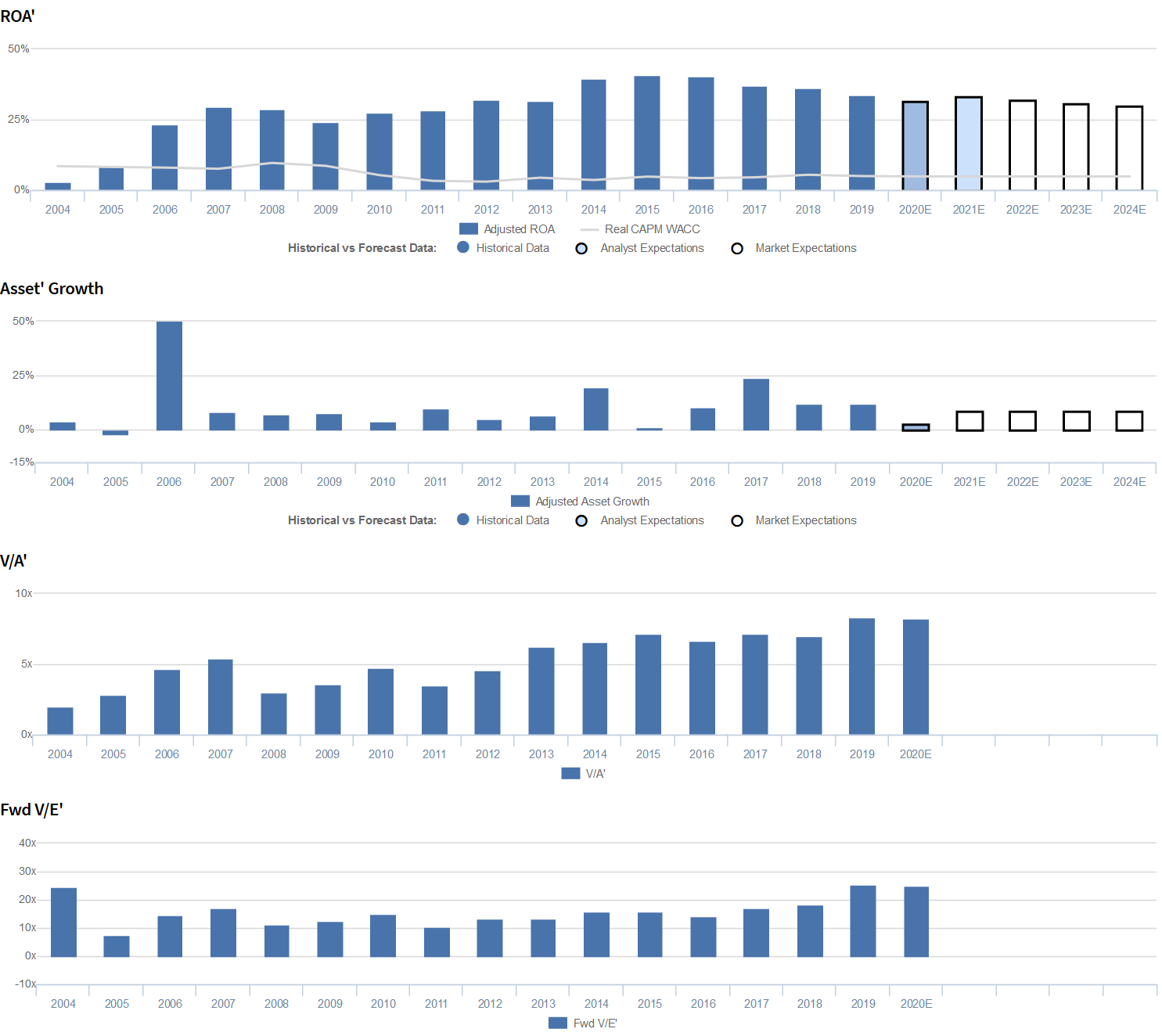 TMO currently trades above corporate averages relative to Uniform earnings, with a 25.8x Uniform P/E (Fwd V/E′). At these levels, the market is pricing in expectations for Uniform ROA to decline from 34% in 2019 to 31% in 2024, accompanied by 9% Uniform asset growth going forward. 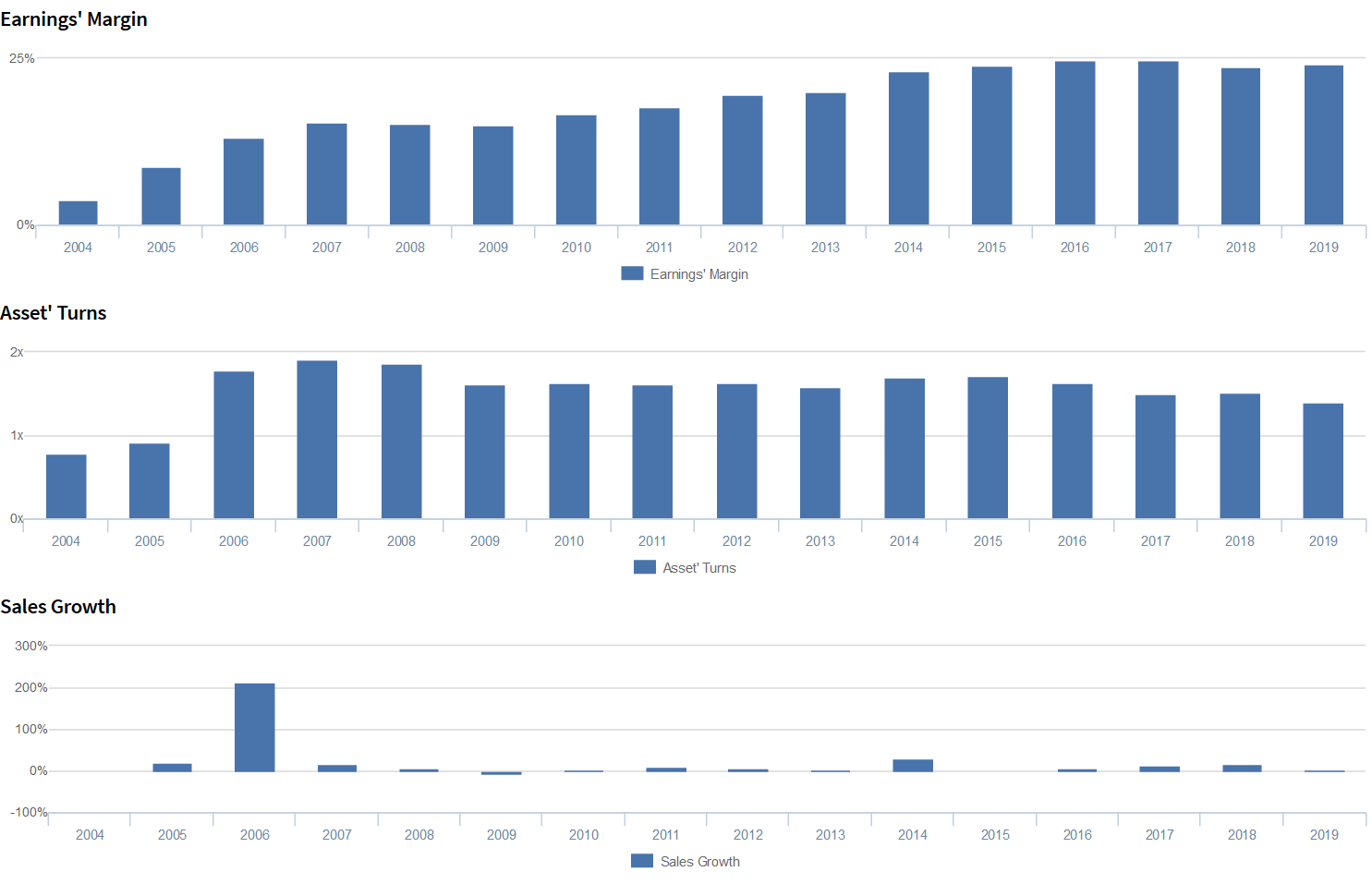 Improvements in Uniform ROA have been driven by steady expansion in Uniform earnings margins and, to a lesser extent, trends in Uniform asset turns.

At current valuations, markets are pricing in expectations for continued compression in both Uniform margins and Uniform turns.

Valens’ qualitative analysis of the firm’s Q4 2019 earnings call highlights that management generated excitement markers when saying their agreement with LabCorp is a nice win for both companies, they will gain more clarity on the extent of their market share gains as competitors release their earnings, and that funds for their capital equipment investment in China will be released throughout the course of the year.

Moreover, they are confident they had 6% organic revenue growth and that they had strong H1 2019 performance in their industrial and applied businesses. In addition, they are confident about their strong positioning to create shareholder value and that their contract extension with PCT partners will create extensive revenue streams in their test franchise for years to come.

However, management may lack confidence in their ability to sustain revenue growth in their Life Science Solutions segment, improve margins to meet expectations, and maintain their biotech and pharma performance and momentum.

Furthermore, they may be concerned about slowing growth in the biotech industry in China, declines in the growth of their industrial end markets, and the launch of their viral vector facility.

Management may also lack confidence in their ability to strengthen their offerings to gain market share, sustain performance at Brammer Biotech, and continue to accelerate growth at Pantheon.

Finally, they may be concerned about the sustainability of their share repurchases and the potential of their acquisitions to contribute to revenue growth.

As-reported metrics significantly understate TMO’s profitability. For example, as-reported ROA for TMO was only 5% in 2019, while Uniform ROA was substantially higher at 34%, making TMO appear to be a much weaker business than real economic metrics highlight.

Moreover, as-reported ROA has been stable at 3%-5% levels in each year since 2007, compared to Uniform ROA that has been 6x-10x higher over the same period, misleading investors to believe the firm has a far lower profitability ceiling than is accurate for over a decade.

As the Uniform Accounting tearsheet for Thermo Fisher Scientific Inc. (TMO) highlights, it trades at a 25.8x Uniform P/E, which is above the corporate average valuations and its own recent history.

High P/Es require high EPS growth to sustain them. In the case of Thermo Fisher Scientific, the company has recently shown an 7% Uniform EPS growth.

We take Wall Street forecasts for GAAP earnings and convert them to Uniform earnings forecasts. When we do this, Thermo Fisher Scientific’s Wall Street analyst-driven forecast is a -1% and 17% growth in 2020 and 2021, respectively.

Based on current stock market valuations, we can back into the required earnings growth rate that would justify $354 per share. These are often referred to as market embedded expectations.

In order to meet current expectations for Thermo Fisher Scientific, the company would need to have Uniform earnings grow by 6% or more each year over the next three years.

What Wall Street analysts expect for Thermo Fisher Scientific’s earnings growth is below what the current stock market valuation requires in 2020, but above the requirement in 2021.

To conclude, Thermo Fisher Scientific’s Uniform earnings growth is below peer averages in 2020. Moreover, the company is trading in line with average peer valuations.