The Real Reason for this Tech Superpower’s Name

If you’ve watched The Men Who Built America or studied the history of Dr. Nikola Tesla, you may know the famous story of Tesla and Thomas Edison’s falling out.

Tesla was working for Edison at would eventually become General Electric, and had many innovative ideas. When Tesla proposed an improvement on Edison’s proposed electricity system, Edison said he’d pay $50,000 if Tesla could actually produce it.

Tesla delivered what he perceived to be a superior solution power generation and distribution… Edison explained to Tesla that he was joking, and offered him a raise of $10 dollars. Tesla didn’t respond well.

Tesla left Edison’s labs and proceeded to partner with George Westinghouse to bring his vision to fruition. He believed his system for transmitting electricity, “alternating current” (AC) was a superior solution to Edison’s “direct current” (DC). Thanks to the use of transformers, the voltage in AC could be transformed for transmitting power in longer distance, before being transformed again for usage in a home or factory or office.

He and Edison fought a propaganda war, but in the end, money won out. Tesla and Westinghouse won the contract to bring power to the Chicago World’s Columbian Exposition in 1983, and more importantly, that led to them winning out on building the hydroelectric power plant at Niagara Falls the very same year. Alternating Current won.

Of course, in his own way, Edison won too. After the success of AC power at Niagara Falls, Edison threatened Westinghouse with bankruptcy through litigation around the patents for alternating current, and Westinghouse caved. Edison ended up owning the patent of AC power, and his General Electric became one of the powerhouses of the 20th century on the back of AC power.

One might assume that Elon Musk chose to name his company Tesla because of his respect for Tesla over Edison, but in reality, that wouldn’t be the case. Musk has been on record several times in saying that he actually views both as role models, because they both were true visionaries he wants to follow.

The real reason Musk named Tesla after Nikola is because of the types of motors he uses in his cars. While many electric vehicles, like most battery powered devices, use DC power, Tesla uses AC induction motors for their cars, and so he felt it only appropriate that he name the car company after the inventor.

Since then, the car company, much like its namesake, has been truly innovative, but constantly has had to battle other economic forces to gain traction. The company has struggled to turn a profit while also growing to gain the scale they need to achieve. Recently, the company has seen their Uniform ROA turn positive, but only by slowing down growth and focusing on profitability.

To justify current valuations though, Tesla needs to be able to both accelerate growth, doubling every 3-4 years, and double Uniform ROA, from 4% last year to 9% next year. For context, the average auto manufacturer has a 5% Uniform ROA currently.

While market expectations remain high, management is showing concerns around hitting car delivery rates, the reliability of their cars, and the success of their service centers. This signals reasons the market may be disappointed going forward.

The market has bullish expectations for TSLA, but management may be concerned about deliveries, reliability, and their service centers 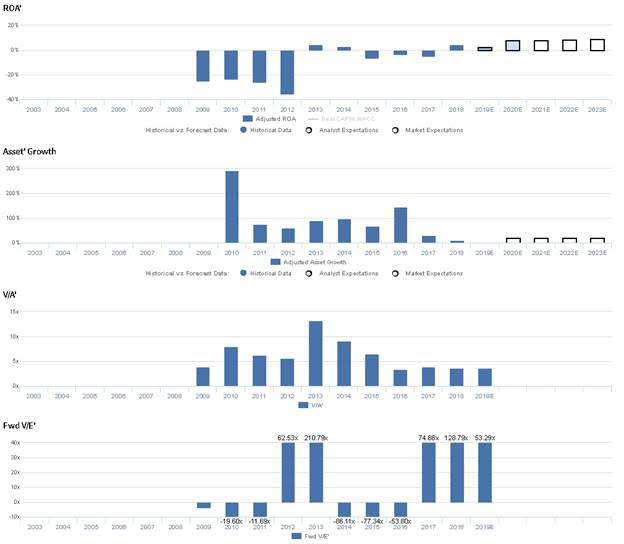 TSLA currently trades near historical averages relative to UAFRS-based (Uniform) Assets, with a 3.7x Uniform P/B. At these levels, the market is pricing in expectations for Uniform ROA to improve from 4% in 2018 to 9% in 2023, accompanied by 20% Uniform Asset growth. 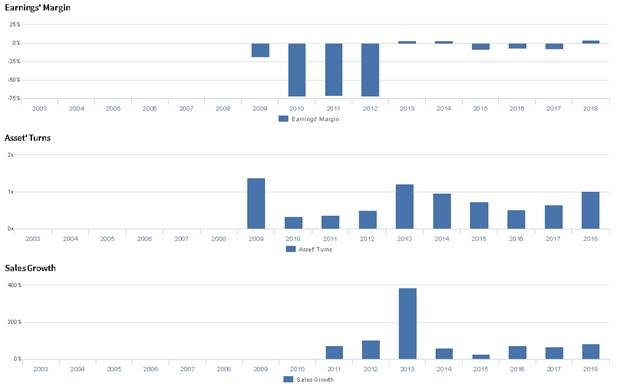 Uniform Accounting metrics also highlight a significantly different fundamental picture for TSLA than as-reported metrics reflect. As-reported metrics can lead investors to view a company to be dramatically stronger or weaker than real operating fundamentals highlight. Understanding where these distortions occur can help explain why market expectations for the company may be divergent.

As-reported metrics understate TSLA’s asset utilization, one of the primary drivers of profitability. For example, as-reported asset turnover for TSLA was 0.7x in 2018, lower than Uniform Turns of 1.0x, making TSLA appear to be a much weaker business than real economic metrics highlight. Moreover, as-reported asset turns have been well below Uniform Turns in each year since 2009, significantly distorting the market’s perception of the firm’s asset efficiency.