I’m from the government and I’m here to help

A friend of mine recently sent me a link of stories about inefficiency in government. There was a story about a consulate sending a letter requesting someone pay a fee of $0.50, and using a $1 stamp to send the request. There was another story about an individual showing up to the same government office 3 times over a few weeks, and getting the same explanation about what was wrong and why it would be fixed within a day, with nothing ever resolved, until finally the third person explained the real issue, almost a month after they had requested help. The list goes on…

There’s a reason the nine words that Ronald Reagan said are the scariest words in the English language are “I’m from the government, and I’m here to help.”

Across local, state, and federal government, there are often stories about old systems, broken down and inefficient processes, and confusing instructions to navigate all the rules in place. Because of bureaucracy and underinvestment, many of these problems are not being resolved.

But there is one company that is investing in the processes to help resolve these issues, and make those nine words not as terrifying as they used to be.

Tyler Technologies (TYL) is a software firm that is focused on removing all the noise in government processes. They provide software to courts to help with personal property valuations, provide accounting systems and administration systems to various levels of government, and even offer jail and jury management systems. Their goal is to solve a lot of the issues that make people dread dealing with the government.

While they are working to improve government transparency and efficiency, GAAP accounting has been distorting their returns, making understanding their performance more opaque than it actually should be.

Under as-reported accounting, Tyler looks like a business that has steadily seen returns decline, and has struggled to add value as they’ve sought to grow the business. Any investors looking at the as-reported GAAP financials would be scratching their heads as to why Tyler’s stock has more than tripled since 2014.

The reality is, just like how Tyler is trying to improve government processes, Uniform Accounting helps explain why Tyler’s stock has risen. They have had robust returns.

But, at the current stock price, the market is pricing in very aggressive expectations for Tyler going forward. The market is expecting Tyler to see those returns expand even more. And we’re seeing interesting signs from management’s recent calls that say there might be a negative inflection occurring for the company, that could cause those positive trends to be shifting.

Today we’re making a special webinar available to the readers of our Valens Research Institutional Daily.

At noon EST, we’re hosting a webinar to review our US equities Conviction Long Idea List.

Market expectations are for Uniform ROA to continue expanding, but management may be concerned about their backlog and contracts 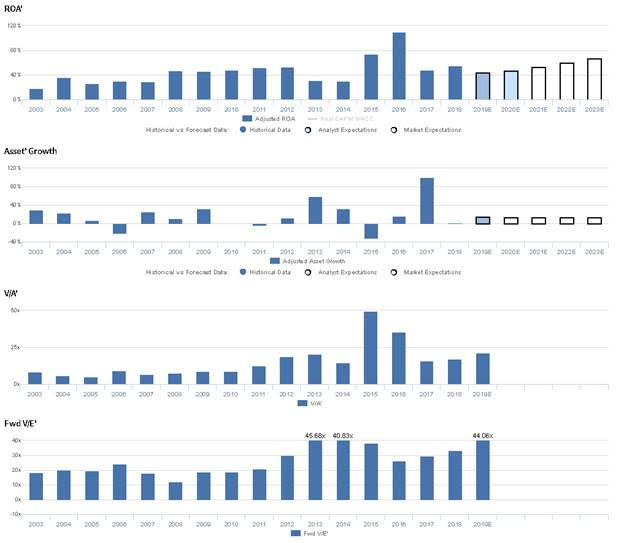 TYL currently trades above historical averages relative to UAFRS-based (Uniform) Earnings, with a 44.1x Uniform P/E. At these levels, the market is pricing in expectations for Uniform ROA to expand from 55% in 2018 to 67% in 2023, accompanied by 13% Uniform Asset growth going forward.

However, analysts have bearish expectations, projecting Uniform ROA to decline to 47% in 2020, accompanied by 14% Uniform Asset growth. 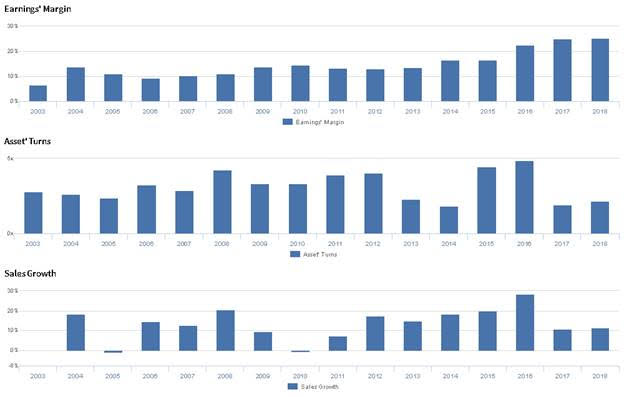 Valens’ qualitative analysis of the firm’s Q2 2019 earnings call highlights that management generated an excitement marker when saying fully diluted shares for the year are expected to be between 40 million and 41 million shares. However, they may be concerned about the sustainability of recent backlog growth and about the value of their North Carolina Odyssey contract. Furthermore, they may lack confidence in their ability to determine the best cloud optimization strategy for their services.

Uniform Accounting metrics also highlight a significantly different fundamental picture for TYL than as-reported metrics reflect. As-reported metrics can lead investors to view a company to be dramatically stronger or weaker than real operating fundamentals highlight. Understanding where these distortions occur can help explain why market expectations for the company may be divergent.

As-reported metrics significantly understate TYL’s asset efficiency, one of the primary drivers of profitability. For example, as-reported asset turnover for TYL was 0.5x in 2018, materially lower than Uniform Asset Turns of 2.2x in the same year, making TYL appear to be a much weaker business than real economic metrics highlight. Moreover, since 2003, as-reported asset turnover has been less than half of Uniform Turns in each year, significantly distorting the market’s perception of the firm’s historical profitability trends.