Uniform Accounting is showing us what has really been powering this market for the last 10 years and 6 months…hint, it’s not share buybacks

The previous bull market lasted from the Great Recession to the beginning of the coronavirus pandemic in America. The 10-year run saw the S&P 500 gain over 300%.

Over the years, many investors lent explanations as to why the appreciation occurred. One popular theory was the proliferation of share buybacks.

Today, we will look at the real reason with the help of Uniform Accounting why equities were able to rise so much.

Share buybacks are a popular capital allocation strategy for management teams. Shareholders usually see them as a positive because it means management has a lot of cash on hand and they are confident in the company’s stock.

It also increases a firm’s earnings per share (EPS) and decreases its price to earnings (P/E) ratio. It does this by decreasing the number of shares outstanding. A firm can increase its EPS without improving profitability through the use of share buybacks. As we’ve talked about before in presentations, IBM was a poster child for this for years.

Although investors like share buybacks, these do not really change the fundamentals of a company. It may be easy to see the stock market and value of share buybacks rising in tandem and say they must be connected. However, correlation does not always equal causation.

This is why here at Valens, we are suspicious about the notion that the market bull run was fueled in large part by share buybacks. The pandemic has appeared to have proved us right.

Share buybacks have dropped dramatically in recent months. This makes sense because of the worrying macroeconomic outlook. The same pattern emerged in past recessions. For example, in 2009, share buybacks for S&P 500 companies fell roughly 75% from 2007.

However, even with share buybacks at half of their previous level, the S&P 500 has reached all-time highs again. Furthermore, since its trough in late March, the index is up over 50%, and the Nasdaq index is up over 60%!

So if share buybacks are not what is pushing the market higher, what is?

Uniform Accounting shows us the fundamentals are the main reason for the market’s progression. The chart below shows the aggregate Uniform return on assets (ROA) over the past 15 years. 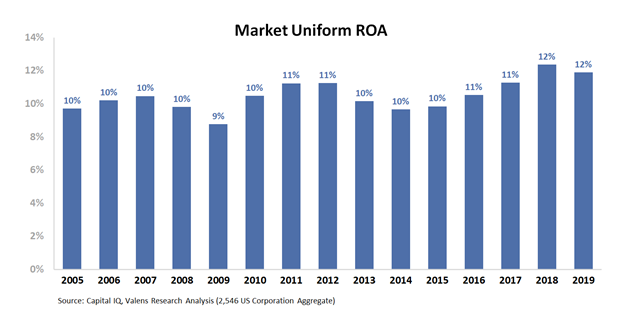 The economy was ravaged in 2008 and 2009, and as such, Uniform ROA reached a low of 9% in 2009. Then, as corporate profitability began to improve, so did the stock market.

When Uniform ROA began to plateau in 2015, the stock market did as well, with the S&P 500 falling roughly 1% that year.

Uniform ROA has consistently stayed above 10% and has continued to improve all the way to 12% over the previous two years. As the fundamentals stayed strong, the market continued its steady advance.

While Uniform ROA is projected to collapse this year, next year it is forecast to rebound strongly, to 13% levels, all-time highs. The potential for fundamental recovery is powering the market higher.

Share buybacks may have played a small role in the rising stock market; however, it is important for investors to see fundamentals were the main reason.

Television pundits and investors like to offer a plethora of different explanations; however, Uniform Accounting is able to cut through the noise and reveal the answers.

When investing, do not be fooled by the noise, look at the fundamentals. They are the main reason for equities moving in the direction they do.