This lawyer turned infamous investor has had CEOs and country treasuries shaking in their boots for decades, applying a legal activism philosophy to get his way and create shareholder value.

But as-reported metrics show a portfolio that has lost its way, as his fund appears to be stretching to find opportunities, looking at low quality names that aren’t undervalued.

In reality, UAFRS-based financial metrics help make sense of the stocks he is buying, and how they line up perfectly for his strategy.

Of the many lawyer jokes in the world, one of the most fitting for individuals who’ve mostly dealt with lawyers around contract law goes something like this (fortunately, it is also one of the least off-color jokes):

Lawyers often appear to take great pleasure in making things more complicated than they actually are. And then taking advantage of the fact that no one else reads the fine print.

So imagine how terrifying it was for anyone who was paying attention in the world of investing when a lawyer decided to start a hedge fund back in 1977. And not just any kind of lawyer, a lawyer who had practiced the dark arts of real estate and investment law.

And so the world found one of the first hedge fund investors who would willfully and happily read the fine print, to take advantage of his targets in ways they’d never imagine.

Paul Singer has spent over 40 years using his Harvard Law degree and legal mind to create significant pain for any investment opportunity that wasn’t being optimized. Most of those who’ve sat on the other side of the table probably have no doubt he took joy in it too. As they’d tell you, “he is a lawyer after all.”

Singer has used his legal mind to build one of the most robust activist investment legacies in the capital markets.

While people like Carl Icahn might generate more headlines than the average investor is aware of, Carl has never gotten a judge to impound a sovereign nation’s naval vessels. Icahn’s activism could practically be labelled greenmail when compared to the robust legal efforts Singer goes through in his activism.

Singer has gone activist against sovereign governments, buying bonds for pennies on the dollar and forcing them to retire. He has taken on well-known companies like Comcast, Twitter, AT&T, and Hess.

Elliott has had 90 equity activist campaigns in the past 7 years, and it has completed 66 of them. Of those 66, 50 of them were successful or were settled—that’s roughly a 75% success rate.

At the end of the day, Elliott’s strategy is simple, find mispriced opportunities that require work, work no one else wants to do to unlock them, and then push harder than others would. Push like a lawyer would.

To do that, Singer and the team at Elliott generally are likely to look for assets that are being mismanaged, but are quality assets that could be monetized if run the right way or framed the right way. Then, the team engages with management and stakeholders to create the change needed to unlock that value.

That being said, analyzing Elliott’s portfolio, it’s not obvious that the fund is investing in companies with quality assets, or companies that are misvalued using as-reported metrics.

We’ve conducted a portfolio audit of Elliott’s top holdings, based on their most recent 13-F.

Unsurprisingly, while Elliott’s investments’ as-reported metrics make it look like Elliott is not running a sound strategy. In reality, they appear to be higher quality names once Uniform Accounting metrics are reviewed.

It’s clear that when Singer and his portfolio managers are making their investment decisions, they’re making decisions based on the real data. 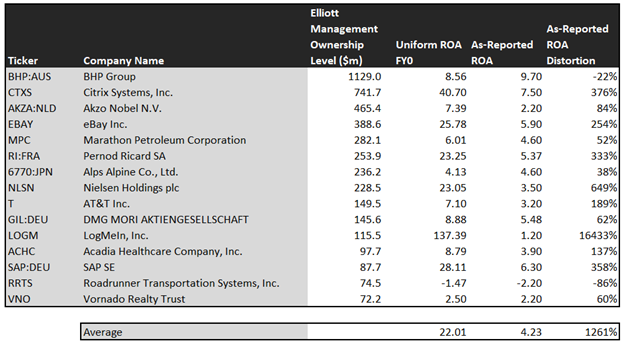 While Singer and Elliott are attempting to create value, like any great activist investor, part of what they’re often trying to do is unlock assets that are already valuable, either through management change, strategy change, or getting the business to sell itself or spin-off segments.

However using as-reported accounting, investors would think Singer is actually focused on bad companies and trying to turn them around. That’s a far more challenging journey to undertake.

On an as-reported basis, many of these companies are poor performers with returns below 6%, and the average as-reported return on assets (ROA) is right at 4%.

In reality, the average company in the portfolio displays an impressive average Uniform ROA at 22%. That’s above corporate average returns currently.

Once we make Uniform Accounting (UAFRS) adjustments to accurately calculate earning power, we can see that the returns of the companies in Elliott’s portfolio are much more robust, the fund is just trying to help investors realize this.

Once the distortions from as-reported accounting are removed, we can realize that Citrix Systems (CTXS) doesn’t have a 8% ROA, it is actually at 41%. Citrix, Elliott’s second largest holding, is a strongly profitable software company going through a transition to a subscription business.

Similarly, Pernod Ricard’s (RI:FRA) ROA is really 23%, not 5%. While as-reported metrics are portraying the company as a low-return wine and spirits business, Uniform Accounting shows the company’s real robust operations.

Nielsen doesn’t have a 4% ROA, it is actually at 23%. Elliott appears to understand that market expectations for the company, thinking it’s a low-return business, is completely incorrect.

The list goes on from there, for names ranging from eBay (EBAY) and LogMeIn (LOGM), to SAP SE (SAP:DEU), Acadia Healthcare (ACHC), and even AT&T (T).

If Elliott were focused on as-reported metrics, it would never pick most of these companies to go activist against, as it would assume these companies’ assets are low-return, low-quality businesses. Unlocking the value of those kinds of assets requires significantly more work. 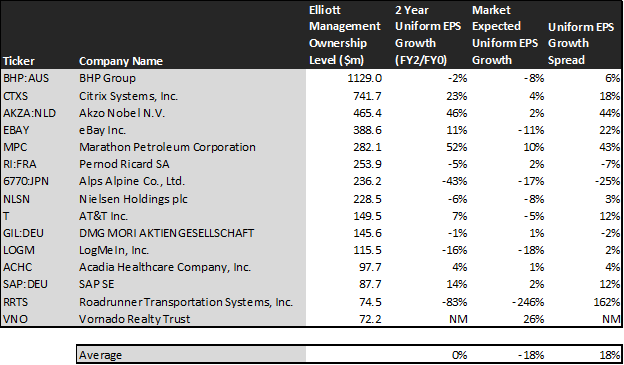 Elliott is thinking it has found companies where analysts forecasts for earnings growth are too pessimistic, but that’s not all.

When Elliott helps fix the company strategy and fix the market’s perception of these companies…these are the kinds of companies that are likely to see their stocks rally massively.

Without Uniform numbers, the GAAP numbers would leave everyone confused. And the risk of returns collapsing is low, considering how high quality these companies are.

One example of a company in the Elliott portfolio that has growth potential that the market is mispricing is Akzo Nobel (AKZA:NLD). Akzo Nobel’s Wall Street analyst forecasts have 46% Uniform earnings growth built in, but the market is pricing the company to have earnings grow by only 2% each year for the next two years.

Another company with similar dislocations is eBay (EBAY). Expectations are for it to shrink massively, with -11% growth in earnings annually. However the company is actually forecast for Uniform EPS to grow by 11% a year. If the company just doesn’t shrink, it is undervalued, but it is primed for much more.

Yet another is the fund’s largest holding, Citrix Systems (CTXS), is priced for modest 4% growth in Uniform earnings, when the company is forecast to grow by earnings by 23% a year.

That being said, there are a few companies it looks like Elliott has a very high hurdle to clear. They may have a view so divergent from the market and analysts, it could be too far off.

Alps Alpine (6770:JPN) is forecast to see Uniform earnings shrink by 43% a year going forward. The market is pricing the company for 17% annual earnings shrinkage. Elliott will have to execute an impressive turnaround to right the ship for this idea.

But most of Elliott’s holdings look like high-quality, misunderstood businesses displaying opportunity that Singer and his team can unlock. It wouldn’t be clear under GAAP, but unsurprisingly Uniform Accounting sees the same signals that Elliott appears to.

As our Uniform Accounting tearsheet for BHP Group (BHP:AUS) highlights, BHP’s Uniform P/E trades at 14.3x, which is below corporate average valuation levels and its historical average levels.

Low P/Es require low EPS growth to sustain them. In the case of BHP, the company recently had a 16% Uniform EPS growth in 2019.

As such, we use Wall Street GAAP earnings estimates as a starting point for our Uniform earnings forecasts. When we do this, we can see that BHP is forecast to see Uniform EPS growth of 5% in 2020, followed by a 9% EPS shrinkage in 2021.

Based on current stock market valuations, we can back into the required earnings growth rate that would justify AUD 30 per share. These are often referred to as market embedded expectations.

In order to meet the current market valuation levels of BHP, the company would have to shrink Uniform EPS by 8% each year over the next three years.

What Wall Street analysts expect for BHP’s earnings growth is above what the current stock market valuation requires.

Based on its Uniform return on assets calculation, the company’s earning power is at 9%, which is 1x the corporate average. Furthermore, with cash flows and cash on hand consistently exceeding debt obligations, BHP has low credit and dividend risk.

To conclude, BHP’s Uniform earnings growth is far above peer averages. However, the company is currently trading below peer averages.