Uniform metrics show this passion project turned into a money-printing machine; however, it would need another big leap to justify lofty expectations.

50 years after its beginnings, some investors would be forgiven for thinking this company continues to be focused on passion projects. After all, that’s how it got its start…

…and how we got artificial heart valves.

While the stock is up over 7x in the past several years, as-reported metrics show a flat level of earning power. It’s decent, but it seems not to be moving any higher—according to the commonly used analysis.

As-reported metrics make the company look like it is seeing relatively modest profitability, supporting the “passion project” thesis. However, Uniform earning power for this firm has actually roared higher, driving the stock to all-time highs.

But after this long run higher, market expectations for the company have gotten very high, and management is finally starting to get concerned about their outlook.

In his teenage years, Miles “Lowell” Edwards suffered two separate instances of rheumatic fever. Symptoms of this disease include problems like fatigue, fever, chest and joint pain, and rashes, among others.

Importantly, the disease can also result in long-term heart issues.

One of the most serious issues that can be faced by those with rheumatic fever is heart valve inflammation. After this heals, it can lead to scarring. The scarring makes the heart have to work harder just to support the body and can eventually lead to heart failure.

Fortunately, Edwards recovered from the fever without lasting heart damage, but it left a lasting impression on the young man that would shape healthcare as it was known.

After graduating from Oregon Agricultural College with an Electrical Engineering degree in 1924, Edwards went on to become an apprentice at General Electric.

After completing that, he returned to Oregon where he went on to become a successful engineer with expertise in hydraulics and pumps.

He was eventually tasked in helping companies such as Weyerhaeuser and Boeing with issues ranging from debarking of trees to storing aircraft fuel at high altitudes.

Lowell became incredibly wealthy and successful, consulting on major projects in any number of industries. But the one area that he kept coming back to was healthcare.

In 1958, then a wealthy man with knowledge of pumps, but less about medicine, Edwards introduced himself to cardiac surgeon, Albert Starr. Edwards approached Starr with an idea for a fully-mechanized heart, and eventually the two settled on a slightly more achievable product—the first artificial heart valve.

In just a few years, the Starr-Edwards valve was designed, and successfully placed in a patient via surgery. Soon after, Edwards Laboratories, now Edwards Lifesciences (EW), was born.

Nearly 60 years later, the company has grown massively, and continues to be focused on heart and other cardiovascular-related issues.

A company that creates ways to save lives, EW has seen shares rise over 60x since its IPO in 2000, and by 7x-8x in just the last five years.

However, investors who have looked at the firm’s as-reported financials at any point in recent history would see a company with stagnant ROA levels.

This is a company that doesn’t appear to have seen any significant profitability expansion since going public. ROAs are just where they were in 2013, at 12%.

When thinking about the company’s purpose, this makes sense. After all, even 60 years later this company looks like it still is a passion-project company.

Why are shares up so much?

The company clearly continues to innovate, and focus not just on passion projects, but those projects that can bring the greatest return to shareholders.

With Uniform Accounting, we can now explain what had the market so excited.

That said, with Uniform Accounting, we can also see the true valuations and market expectations for a company. For EW, these valuations are reaching nose-bleed levels.

After running as far as it has, EW is now entering expensive territory. Uniform P/E levels have risen from market-average 20x levels just a few years ago, to double that now.

The market has gotten excited about this name, but while the company has created significant value, it may need another massive leap forward like it delivered 60 years ago to justify valuations.

The market’s expectations border on irrational.

Also, Edwards Lifesciences’ management appears to be growing pessimistic about growth, enrollment, and pricing. Although a historically strong business, high expectations for the firm, coupled with growing management pessimism point to risks investors should be aware of. 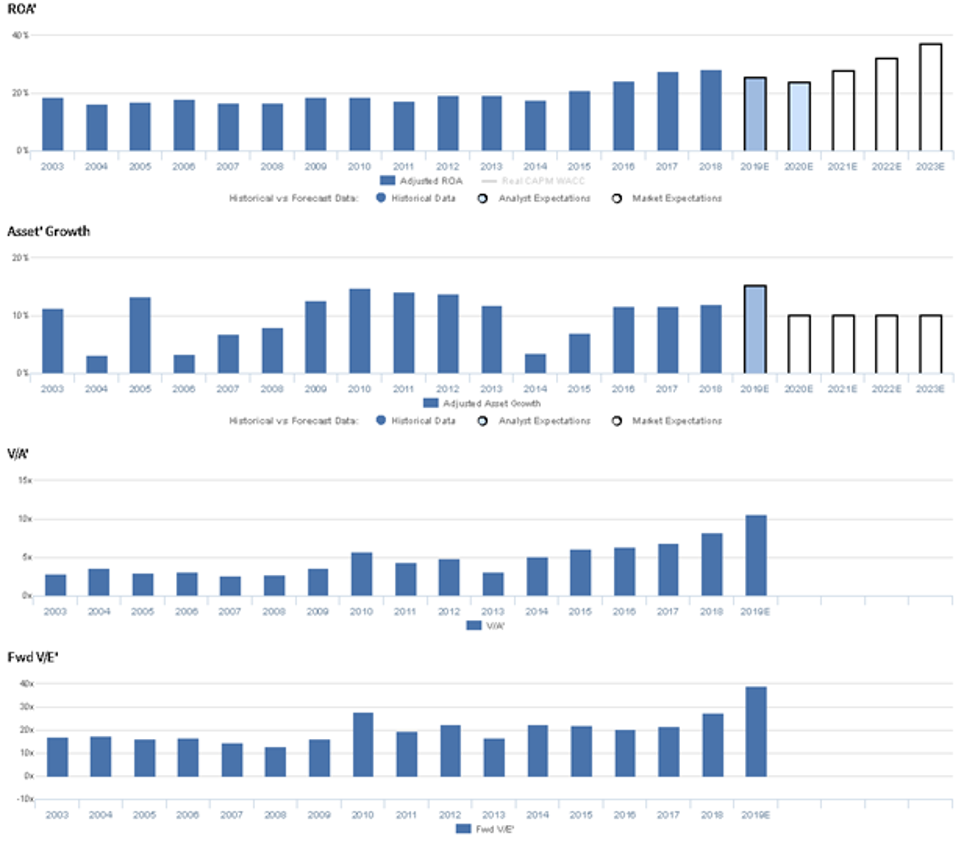 EW currently trades above recent averages relative to UAFRS-based (Uniform) Earnings, with a 39.3x Uniform P/E. At these levels, the market is pricing in expectations for Uniform ROA to improve from 28% in 2018 to 37% in 2023, accompanied by 10% Uniform Asset growth going forward.

However, analysts have bearish expectations, projecting Uniform ROA to fall to 24% in 2020, accompanied by 15% Uniform Asset growth.

Meanwhile, Uniform Asset growth has been robust and positive in each of the past 16 years, ranging from 3% to 15%. 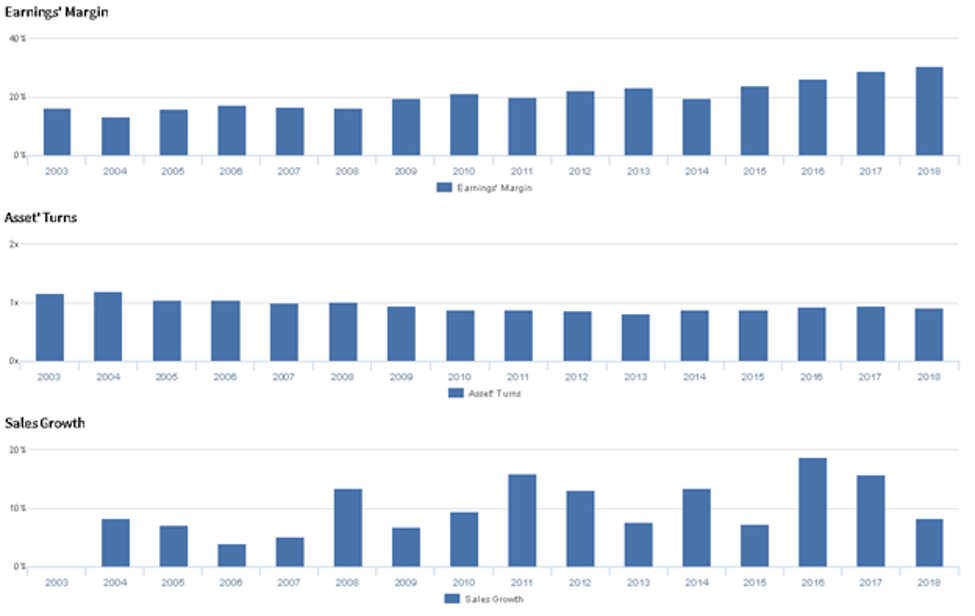 Valens’ qualitative analysis of the firm’s Q3 2019 earnings call highlights that management generated an excitement marker when saying moderate TAVR growth is consistent with their long-term expectations. In addition, they are confident their quarterly gross profit margin improved compared to the same period last year.

However, management may lack confidence in their ability to sustain growth in TAVR therapy, PASCAL market penetration, and international sales, specifically in Europe.

Moreover, they may be concerned about sales seasonality, margin headwinds, and the progress of their CLASP study enrollment. Furthermore, they may be exaggerating the growth opportunities for TAVR centers and their ability to increase their number of patients treated. Finally, they may lack confidence in their ability to execute a premium pricing strategy for PASCAL, meet mitral sales guidance, and combat TAVR pricing pressures.

For example, as-reported ROA for EW was 12% in 2018, materially lower than Uniform ROA of 28%. This makes EW appear to be a much weaker business than real economic metrics highlight.

Moreover, since 2016, as-reported has remained at 12% levels, while Uniform ROA has improved from 25% to 28%, directionally distorting the market’s perception of the firm’s recent profitability trends.

As the Uniform Accounting tearsheet for Edwards (EW) highlights, the EW Uniform P/E trades at a very high 39x, well above corporate average valuation levels and its own recent history.

High P/Es require high EPS growth to sustain them, and for EW, the required growth to support current multiples is a high 15%+. That said, in the case of EW, the company has recently shown 16% Uniform EPS growth.

We take Wall Street forecasts for GAAP earnings and convert them to Uniform earnings forecasts. When we do this, EW’s Wall Street analyst-driven forecast is a somewhat concerning 7%-8% into 2019 and 2020.

To conclude, EW’s Uniform earnings growth is roughly in line with peers. Yet, the company is trading at well above average peer valuations.