There seems to be a disconnect between the unemployment rate and what’s going on in the rest of the economy. People are trying to figure out how to reconcile the increasingly tenuous economic outlook with historically strong employment.

Some people point to the fading labor participation rate as the answer. However, there’s a fundamental misunderstanding about how labor force participation is calculated.

Today, we’ll unpack the relationship between unemployment and labor participation.

Unemployment is still defying the odds.

That means the labor market beat expectations. And these numbers are in line with recent months. We added 256,000 jobs in November and 263,000 in October.

There’s a bit of a mismatch, though.

December’s job data suggests the job market is still white hot. And yet, other market-outlook data indicates we’re on the verge of a recession.

Some people reconcile the raging job market and the economy’s tenuous footing by saying job data is misleading. They claim unemployment rates are only low because no one wants to go to work. And they back up this idea using an entirely different metric.

Today, we’ll take a closer look at two ways of determining the health of the job market. We’ll dive into how both rates are calculated and try to clear the air about what’s going on in the economy.

We’ll also explain why unemployment is going to be an issue eventually – just not for the reason some people think.

Some skeptics are sounding the alarm on labor-force participation.

The labor participation rate measures what percentage of working-age Americans who are working or looking for work. This is separate from the unemployment rate, which is simply the number of unemployed Americans divided by the labor force.

On its surface, the labor participation rate looks like it’s plummeting. It was 62% in December – inching toward its lowest level in the 21st century. And it has been trending lower since 2007.

And if participation is tanking, the unemployment rate may not be as useful as it once was. Unemployment looks like it’s low because people aren’t looking for work, not because everyone has jobs. It could signify that unemployment rates are distorted.

In fact, some argue it means the unemployment rate is artificially low.

It’s true that weak labor-force participation could be cause for concern. If fewer people are looking for work, it might suggest a shortage of workers in the economy. That could slow economic growth. 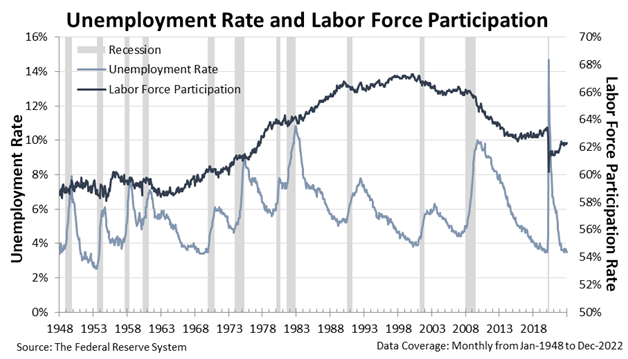 Since 2007, a large percentage of Baby Boomers – folks born from roughly the mid-1940s to the mid-1960s – have reached retirement age. That’s a big chunk of the American workforce that’s no longer working.

So it’s no surprise that labor-force participation is declining.

This is a massive flaw in how the rate is calculated. It’s why we don’t expect the rate to recover anytime soon.

The Federal Reserve is actively trying to raise unemployment. It seems like it’s finally starting to work. We expect that number to rise in the coming months.

The tech industry has started the year by cutting tens of thousands jobs, and another round is likely on the way.

That’s a sign that higher interest rates are starting to do their job of slowing the economy.

For now, don’t listen to the people claiming unemployment data is unreliable. Most of them don’t understand what they’re looking at.

Even if labor-force participation keeps falling, you can still learn a lot about the economy from unemployment data.