This company is part of the legacy of one of the greatest roll-up artists of this generation, and most probably doesn’t realize it.

After he built a best-in-class business, he instilled a culture of growth. Even years after he left, this culture led to what is likely the best acquisition they ever completed. It also further tied him to another entrepreneurial legend we touched on a few months ago.

By 1989, just thirteen years after he dropped out of school, Brad Jacobs had already started, grown, and left two multi-billion-dollar businesses.

When he left Amerex in his late twenties, annual contract volumes at the brokerage was over $4bn. When he left Hamilton Resources, five years later, that company had over $1bn in annual revenues.

By the time 1989 rolled around, he was just 33 years old. But he already had plenty of experience in rolling up smaller companies, and growing industry-dominating firms.

That year, he saw another opportunity, this time in waste collection.

He saw an opportunity to consolidate the small trash collection businesses that serviced rural areas, and often overlapped. He saw an inefficient process and launched United Waste Systems to fix that.

As he had in the past, Jacobs was able to massively grow this business and took it public after just three years.

Rather than compete, United sold to Waste Management, creating a trash powerhouse, and Jacobs was quickly on to his next venture.

This time, he turned his focus to equipment rentals, forming United Rentals (URI).

As he had successfully done in the past, Jacobs grew this business to a near-Fortune 500 firm by the time he left in 2007 to head his next venture. In these ten years, Jacobs had instilled a culture and focus on growth, and effectively rolling up competition.

That was why it came as little surprise when in 2012, Jacobs’ URI came up against another former Huizenga company, RSC Holdings.

The two roll-up giants saw their paths cross yet again.

For background: when Jacobs was launching URI, Huizenga was backing NationsRent, which eventually got acquired by RSC Holdings, then Rental Service Corp.

Eventually, as Huizenga and Jacobs companies do, this new firm grew massively.

In 2012, the tables turned though, and this time, the Jacobs company acquired the Huizenga company.

The largest equipment rental company in the world, URI, a former Jacobs company, rolled up one of its largest peers in a desire to continue to grow. This gave them an unrivaled scale.

In the years since, we have the data to evaluate, and it would appear this was the right move.

After seeing profitability sit below cost of capital levels from 2008 through 2010, URI was just coming out of the basement in 2012, when the RSC acquisition propelled its profit to all-time highs.

The combined firm was able to not only grow, but also remove significant costs, through removing redundant locations, employees, and processes.

Since then, URI has seen Uniform ROA sit at 8%-9% levels, double cost-of-capital levels, and much more stable than it had seen pre-2012.

However, markets continue to be bearish around the name, failing to believe it can sustain recent wins, even after a decade of success post-Jacobs.

Valuations for the name have consistently been at a significant discount to market averages. Although management sentiment suggests possible headwinds making this a name to stay away from for now, Uniform Accounting highlights the major disconnect between the business transformation at URI, and the way the market perceives it.

United Rentals, Inc. Embedded Expectations Analysis – Market expectations are for Uniform ROA compression, and management may be concerned about margins, productivity, and CapEx 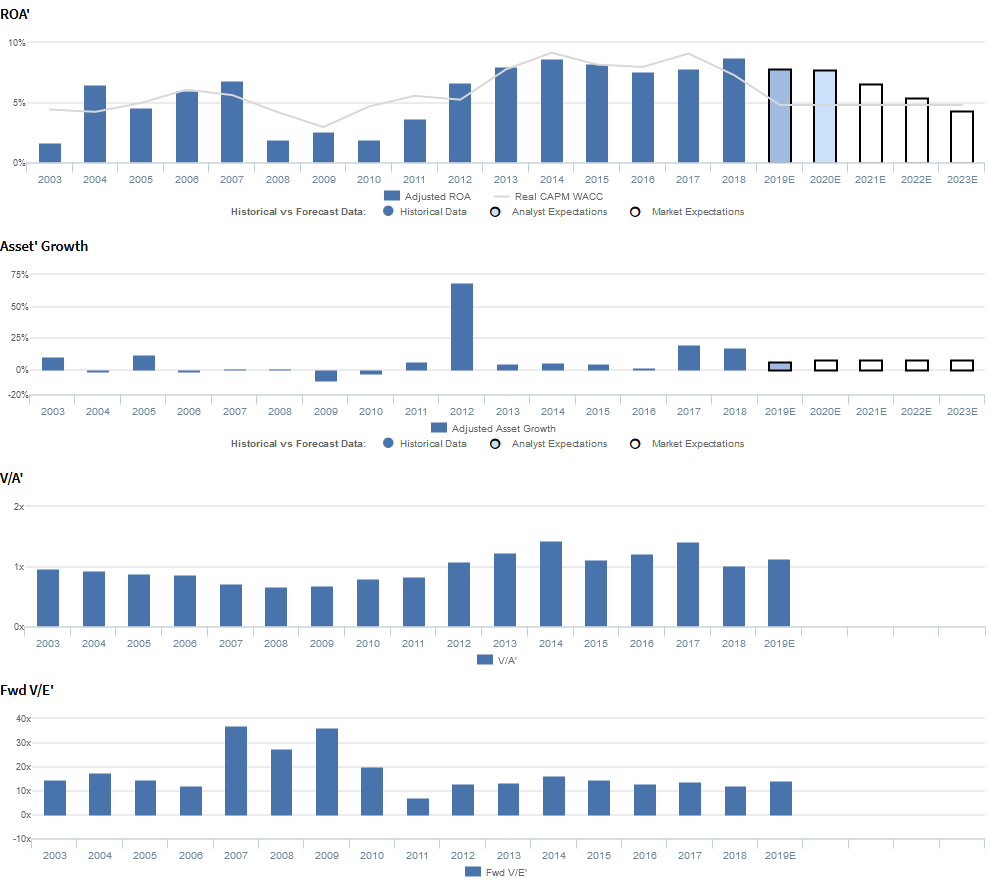 At these levels, the market is pricing in expectations for Uniform ROA to decline from 9% in 2018 to 4% through 2023, accompanied by 7% Uniform Asset growth going forward.

Meanwhile, Uniform Asset growth has historically been muted, ranging from -9% to 12% from 2003-2016, excluding 68% growth in 2012 related to the aforementioned merger.

However, in recent years, the firm has seen more robust Uniform Asset growth of 17%-20%, by expanding rental operations through the acquisitions of NES Rentals, Neff Corporation, Bakercorp International, and Vander Holding Corporation in 2017-2018. 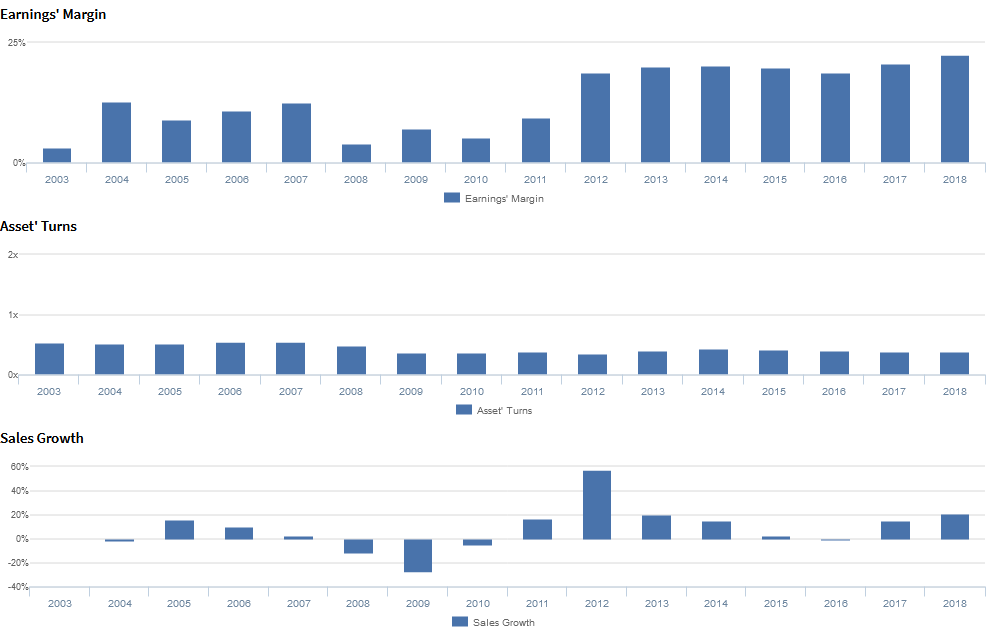 Cyclicality in Uniform ROA has been driven by trends in Uniform Earnings Margin, and to a lesser extent, Uniform Asset Turns.

At current valuations, markets are pricing in expectations for further declines in Uniform asset turns, as well as a reversal of positive trends in Uniform earnings margins.

Valens’ qualitative analysis of the firm’s Q3 2019 earnings call highlights that management is confident they have been focused on the BlueLine integration and smaller deals. They are also confident they are seeing stronger demand among their core end markets.

However, they are also confident that although they saw record EBITDA levels, they saw pressure on margin and flow-through. They may also be concerned about fleet productivity.

Furthermore, they may be concerned about the health of the oil and gas market, and they may lack confidence in their ability to further cut CapEx.

For example, as-reported earnings margin for URI was 30% in 2018, materially larger than Uniform earnings margin of 22%. This makes URI appear to be a much stronger business than real economic metrics highlight.

As the Uniform Accounting tearsheet for United Rentals (URI) highlights, the company’s Uniform P/E trades at a low 14x, well below corporate average valuation levels and is in line with its own recent history.

We take Wall Street forecasts for GAAP earnings and convert them to Uniform earnings forecasts. When we do this, United Rentals’ Wall Street analyst-driven forecast is a somewhat low 2% in 2019 and 7% 2020.

However, what Wall Street analysts expect for United Rentals’ earnings growth falls above what the current stock market valuation requires.

To conclude, United Rentals’ Uniform earnings growth is above peer averages. Also, the company is trading at well below average peer valuations.