In the beginning of 2020, we highlighted a “Tiger Cub” fund that was looking to a wide breadth of investments to stay relevant in a constantly changing market. Of course, the pandemic and its aftermath have flipped many traditional investing strategies on their heads, let alone ones working off the beaten path.

Now, more than 18 months later, let’s check back in on Viking Global to see how they have tweaked their strategy throughout the choppy waters of the pandemic and recovery.

In the past two years, Viking Global has seen its fair share of calm and stormy market conditions. 2020 featured a sharp downturn, followed by huge gains for investors willing to ride out the down periods.

Then in the beginning of 2021, Viking Global was one of the hedge funds burned during the Gamestop (GME) and AMC (AMC) trading, down 7% in just a few weeks.

After coming out of these conditions, the portfolio has changed drastically. This is why we are returning to the fund to see if the strategy we outlined back in 2020 still holds.

But the history of the Scandinavian seafarers goes much further back.

While the Western Europeans viewed this as a new terror sent from God to punish them, the reality is the Vikings had been trading and raiding across Russia and Eastern Europe, traveling all the way to Constantinople, for some time.

The farmers and fishermen from Denmark, modern Norway, and Sweden had a long-run relationship with both the sea and farming.

The Vikings weren’t just raiding for the sake of raiding. They had to continue to provide for their people like they’d done historically.

He left Tiger in 1999 before the fund closed down, starting Viking Global, which grew at one point to over $30 billion in assets under management. However, like all the Tiger Cubs, he has remained part of the network of Cubs that all share ideas and strategies, and themes for investing.

And one of the key trends that Halvorsen and the other Cubs focused heavily on during the second half of the 2010s was the growing importance of venture capital, and how many high-flying companies were waiting to enter public equity markets until the real gains had been made.

That being said, the vast majority of Viking’s portfolio, over $20 billion, remains in public equity investments, focused on the same kind of companies that Viking has always focused on, undervalued companies with strong fundamentals and macro tailwinds.

Analyzing Viking’s portfolio, it’s not obvious that the fund invests in either high-quality, undervalued names or companies with strong macro tailwinds when using as-reported metrics.

Unsurprisingly, while Viking’s investments’ as-reported metrics make it look like Viking has lost its way, in reality, they appear to be higher quality names, once Uniform Accounting metrics are reviewed. 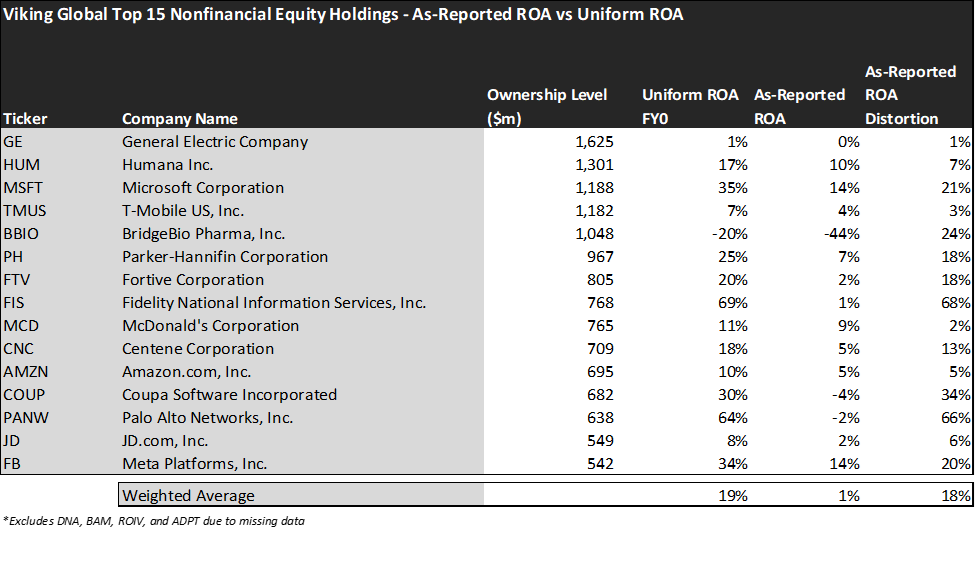 On an as-reported basis, many of these companies are poor performers with returns below 6%, and with an average as-reported return on assets (ROA) of 1%.

In reality, the average company in the portfolio displays an impressive average Uniform ROA at 19%. That’s currently above corporate average returns.

Once the distortions from as-reported accounting are removed, we can realize that Palo Alto Networks (PANW) doesn’t have a -2% ROA, it is actually at a whopping 64%. Rather than a name bleeding value, it is a strongly profitable innovator.

Similarly, Fidelity’s (FTV) ROA is really at 69%, not 1% as GAAP would have you believe. While as-reported metrics are portraying the company as a low return distribution business, Uniform Accounting shows the company’s real robust operations.

The list goes on from there, for names ranging from Coupa Software (COUP) and BridgeBio Pharma (BBIO), to well-known names like Microsoft (MSFT), and Meta (FB).

Viking is not just finding high-quality companies with strong tailwinds though, it is finding mispriced companies.

One example of a company in the Viking portfolio that has growth potential that the market is mispricing is BridgeBio Pharma. Wall Street analysts have forecast 107% Uniform earnings growth built in, but the market is pricing the company to have earnings shrink by 196% each year for the next two years.

Another company with similar dislocations is General Electric. Expectations are already high, for 48% growth in earnings. However, the company is actually forecast for Uniform EPS to grow by a whopping 2,098% a year.

T-Mobile (TMUS) is forecast to see Uniform earnings shrink by 30% a year going forward. However, the market is pricing the company for 11% annual earnings growth, a steep premium.

Despite the huge changes over the past 18 months, Viking Global is still able to create a value-accretive strategy.

As the Uniform Accounting tearsheet for General Electric Company (GE:USA) highlights, its Uniform P/E trades at 25.5x, which is around the global corporate average of 24.0x, but below its own historical average of 60.2x.

Moderate P/Es require moderate EPS growth to sustain them. In the case of General Electric, the company has recently shown a 98% Uniform EPS decline.

We take Wall Street forecasts for GAAP earnings and convert them to Uniform earnings forecasts. When we do this, General Electric’s Wall Street analyst-driven forecast is for EPS to expand significantly in 2021 and by 80% in 2022.

Based on the current stock market valuations, we can use earnings growth valuation metrics to back into the required growth rate to justify General Electric’s $96 stock price. These are often referred to as market embedded expectations.

The company is currently being valued as if Uniform earnings were to grow 48% annually over the next three years. What Wall Street analysts expect for General Electric’s earnings growth is above what the current stock market valuation requires both in 2021 and in 2022.

Lastly, General Electric’s Uniform earnings growth is above peer averages, and the company is trading near its average peer valuations.