We’re not out of the woods yet

The market held up remarkably well during the pandemic. This is partly because corporate and consumer balance sheets were so strong. Government stimulus helped bolster these balance sheets, as did other programs, like pausing all student loan payments.

That couldn’t last forever, and now, we’re on the eve of restarting student loan payments. This will be a major test to see if consumer balance sheets are as healthy as we think they are, which could determine how severe a possible recession might be.

Inflation is getting lower. We can’t call it low, though.

Earlier this month, the U.S. Department of Labor released inflation data for October. The consumer price index (“CPI”), which tracks the change in price of consumer goods, increased 7.7% in October 2022 compared to 2021.

Believe it or not, investors took it as an encouraging sign. The CPI was 8.2% in September and 9.1% in June. The market took off on the positive news.

Things are definitely better now than they were in June. That being said, inflation is still historically high. We haven’t seen levels like these since the 1980s.

Here’s why investors were excited… The Federal Reserve is looking for some sort of positive news, too. That will be its sign to stop raising interest rates so aggressively.

The Fed has been dogmatic in its pursuit of lower inflation. Its primary weapon this year has been rate hikes.

The idea is that by raising rates, it will become more expensive for companies and consumers to borrow money. Demand will fall and the economy as a whole will slow down. That will bring inflation down with it.

The Fed’s benchmark inflation rate was nearly zero back in March before inflation took off. Today, the target range is nearly 4%.

The average rate on a 30-year fixed mortgage has jumped from just over 3% at the start of the year to about 7% now.

As long as inflation keeps rising, the Fed will keep raising rates. That’s why the market rejoiced when inflation declined last month.

If this trend continues, the central bank might be able to take its foot off the gas. After the CPI report came out, Vice Chair Lael Brainard said that the Fed might decrease the size of its next rate hike.

This is important because it takes time for rate hikes to work their way through the economy.

Raising rates doesn’t immediately lower inflation. Spending and growth can take months to slow down. Because of this, there’s something of a lag between the Fed taking action… and our seeing the results.

If the central bank keeps raising rates when it doesn’t need to, it could go too far. It might end up hurting the economy more than necessary.

That’s why the actual inflation number isn’t necessarily the best gauge for when to stop rate hikes..

Instead, the Fed looks at the overall trend.

The next big question is exactly when the Fed should start to ease up.

To get a better idea, we can turn to one of our favorite historical blueprints for today’s economy.

If you’ve been following our work this year, you know we believe today’s environment is similar to that of the 1940s. The economic pressures we’re facing today are a lot like what happened decades ago.

Specifically, inflation became an issue after World War II. As we explained back in July, soldiers returned home ready to start families and invest in their new lives. The U.S. switched gears from wartime production to consumer goods.

Demand skyrocketed. And the economy couldn’t keep up. By 1947, inflation had spiked to almost 20%.

The Fed began raising rates in an effort to dampen consumer demand. Inflation did start to fall… However, it took more than a year to get that number sustainably below 10%. 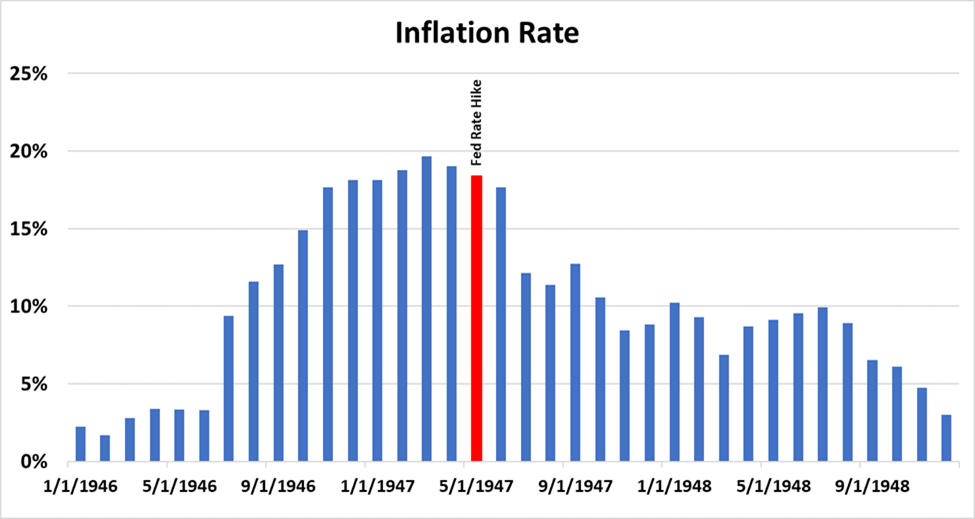 Despite the Fed’s swift actions, folks had to wait a while for some relief.

It’s the same situation this time around. Higher interest rates will go a long way toward fixing inflation. That doesn’t mean we should expect an immediate solution.

The Fed is right to consider slowing down rate hikes. However, we’re not ready to celebrate just yet…

Back in the 1940s, the market traded sideways for about a year and a half after the Fed started raising rates. If we use that as our guide, we can expect the same thing in the near term.

It will take time for the economy to digest these interest-rate hikes… even if the Fed starts backing off.

In the meantime, don’t expect this market to keep climbing like it has over the past decade. Sell the highs and buy the lows. We’ll likely get a shallow recession before stocks take off again.