With alarm bells ringing over inflation, is now the time to get out?

Over the past few months, pundits and investors have worried about how inflation might impact their portfolios. With historic spending efforts and the conditions of the pandemic, many wonder if inflation will pick back up.

Today, we go over prior times of high inflation and analyze whether it is going to happen again.

Historically, inflation has wreaked havoc on economies all over the world. In the 16th century, the Spanish Empire brought back so much silver from the New World, inflation caused the economy to collapse.

Famously, the Weimar Republic was crippled in the 1930s by rampant inflation, forcing German citizens to spend millions of marks to buy a loaf of bread. In Zimbabwe and Venezuela, hyperinflation made currencies and investments worthless.

While the U.S. has never seen hyperinflation, the country has tackled waves of high inflation. Prolonged stagflation in the 1970s slowed economic growth and depressed stock market valuations for practically an entire decade.

There may be a risk for higher inflation coming out of the pandemic as well.

With over $9 trillion committed by Congress and the Federal Reserve to fight against the pandemic, companies and investors are flush with cash. However, there has been little comparative spending, with many traditional luxury items such as cruises and vacations are still out of reach.

This is one reason we have seen the recent non-fungible token (NFT) craze, as investors with cash to spend are looking for somewhere to park it.

Furthermore, the supply chain for many critical goods has been disrupted by the pandemic. Products like semiconductors are seeing widespread shortages. This means as the world continues to open up, businesses may struggle to match supply to rising demand.

Inflation is caused by more money chasing fewer goods. If a product is in high demand and low supply, the price goes up.

Periods of historically low inflation over the past years have helped to facilitate the record stock market highs.

With low inflation, investors keep more money from their investments, and can pay a higher price for the same earnings. In other words, the P/E ratio can be higher. In reverse, high inflation drags down the stock market.

This is why many investors are fearing the return of inflation. However, this risk may be overblown.

While there may be a risk for short-term inflation to rise, there is no reason for equity investors to panic.

Right now, the price to earnings (P/E) ratio for the market is being supported by the low tax and low inflation environment. This means the market average P/E can be around 20x, with an inflation rate below 4%. 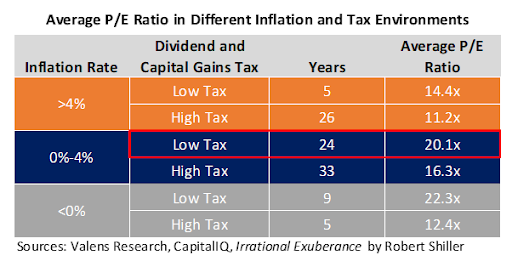 While inflation hawks panic about stagflation and double-digit inflation, in the long run, inflation has rarely come above 4% and therefore crashed P/E multiples and the market. We can go back historically and look at the long-run inflation rate of the U.S. to give context to the inflation of the 70s.

As you can see below, inflation is usually at low levels, coming in at an average of around 2% since 1914. The orange highlights periods of inflation over 4%, the blue is between 0% and 4%, and the grey is anything under 0%.

Periods of high inflation are anomalies, not the norm.

The first period of high inflation came between 1914 and 1921, as the U.S. government made record spending efforts, in particular in the midst of the first World War. Predictably, the second wave of inflation came during World War II as the government once again spent record amounts of money.

Finally, the period of prolonged inflation during the 1970s was exacerbated by poor monetary policy by the Federal Reserve.

Thanks to an incorrect assumption that inflation was linked to employment, the U.S. was pumping out money instead of cutting back on interest rates. When Paul Volcker, the Fed chair declared war on inflation and aggressively raised rates, inflation came back to normal levels.

With the Fed now in control of monetary policy and inflation, it has been able to sustain steady inflation rates over the past forty years. At this point one might argue the problem has been the opposite of investor concerns…inflation has been too low.

With current inflation rates at only 1.7%, investors will have plenty of advanced warnings if inflation rates were to breach above 4% and really begin to be a significant headwind to valuations, as opposed to having a transient impact, as we’ve been discussing.

This means while headlines may be looking to prey on investor fears, there is little risk of an inflationary spike in the short-term.