One of America’s Great Business Builders

Most people would dream to create a single billion dollar business.

In 1987, Huizenga took over Blockbuster Video when the company only had 19 stores. He saw the growth opportunity and the company’s unique positioning in their market, and helped turbocharge the company’s growth, accelerating their store openings, and also pushing for significant acquisitive growth, as Blockbuster rolled up the video rental space.

In 1996, as his Republic Industries had been acquiring new and used car dealerships, they created AutoNation. After spinning off or selling several non auto-related businesses, by 1998 the public company changed its name to AutoNation. The company is currently worth $4.7 billion.

Huizenga also founded the Florida Panthers, the Florida Marlins, and at one point owned the Miami Dolphins. While he didn’t own either the Marlins or the Dolphins when they were worth over a billion, the Dolphins are currently worth $2.8 billion. In 2017, the Marlins were sold for $1.2 billion.

In 1962, he borrowed a small amount of money from his family and bought some used garbage trucks from a local trash hauler. He built a company from that single garbage truck, growing aggressively through acquisition, a trick he later deployed at both Blockbuster and at AutoNation, and eventually built a business that has $15 billion in revenue today, and has a market capitalization of $47 billion.

Waste Management (WM) is the largest public waste disposal company in America today, and it was built through his vision, though it has continued to steadily grow long after him.

Most people assume that the waste disposal space is a quiet market, but in the past 4 years, Waste Management has been a strong performing stock, rising over 130% since January 2015. The market has consistently paid a premium for the company and their peers, with as-reported earnings rising from $750 million in 2015 to $1.9 billion in 2018.

Uniform Accounting metrics show that growth has not been nearly as significant though, and markets may be paying up for artificial growth. Uniform earnings still grew over that period, but only from $1.3 billion to $1.8 billion. Not enough to justify current valuations, which are pricing the company to grow at rates that are only explained by distorted as-reported metrics.

And the market may be disappointed sooner rather than later, as management appears to be downplaying concerns about free cash flow, acquisitions, and EBITDA, meaning as-reported metrics may start to reflect the realities Uniform metrics have already been reflecting.

Market expectations are for Uniform ROA to improve, but management may be concerned about their free cash flow, acquisitions, and EBITDA 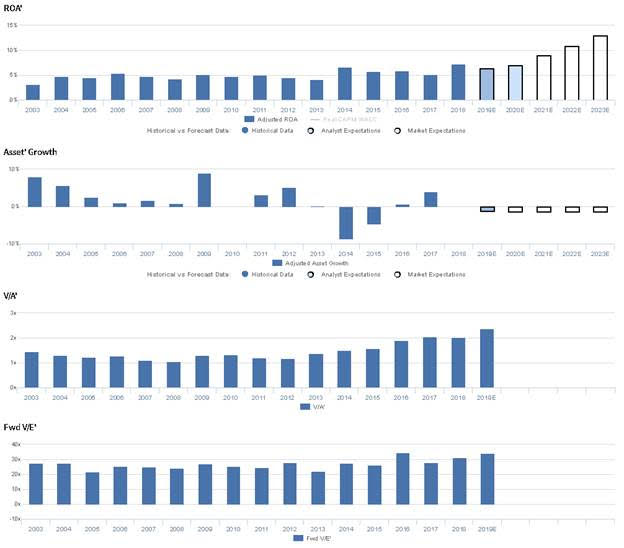 WM currently trades above recent averages relative to UAFRS-based (Uniform) Earnings, with a 34.3x Uniform P/E. At these levels, the market is pricing in expectations for Uniform ROA to improve from 7% in 2018 to 13% in 2023, accompanied by 1% Uniform Asset shrinkage going forward. 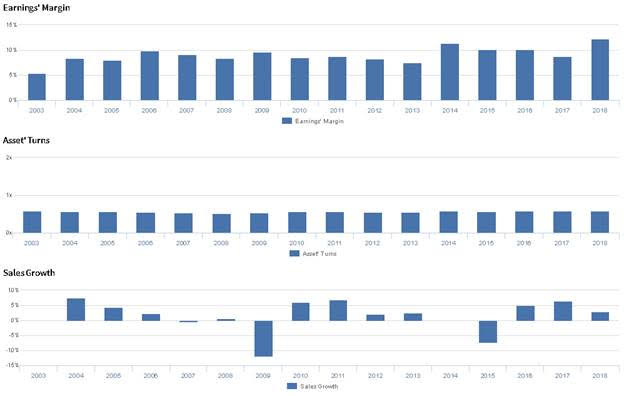 Improvements in Uniform ROA has been driven by improvements in Uniform Earnings Margin and stable Uniform Asset Turns. Uniform Margins improved from 5% to 10% from 2003 to 2006, before falling to 8% in 2013. Uniform Earnings Margin then rose to 11% in 2014, before sliding to 9% in 2017, and rising to 12% in 2018. Meanwhile, Uniform Turns have sustained 0.5x-0.6x levels from 2003-2018. At current valuations, markets are pricing in expectations for continued improvements to Uniform Margins and stability in Uniform Turns.

Uniform Accounting metrics also highlight a significantly different fundamental picture for WM than as-reported metrics reflect. As-reported metrics can lead investors to view a company to be dramatically stronger or weaker than real operating fundamentals highlight. Understanding where these distortions occur can help explain why market expectations for the company may be divergent.