The idea of networks has been a hot idea to invest in over the last few years. The reason makes sense since it transforms your business model. If you can build a valuable network, then the customers also become the product either as advertising targets or data sources.

This company has capitalized on this lucrative concept by hosting one of the largest crowd-sourced review networks on the internet. However, as-reported metrics think their network hasn’t hit its stride yet.

Uniform Accounting shows a very different picture, and a different decision investors need to make about the company’s strategy.

Look at many of the largest companies in the New York Stock Exchange and observe what they have in common—they benefit from “network effects.”

The network effect is a phenomenon where a platform becomes more valuable the more users it has. The thing that draws people to a marketplace or other platforms is availability of a service, or availability of customers if they are offering a service or good.

As more people come, that means more goods or services will come since that is where demand is. This leads to more people coming to the platform for the services.

That idea has allowed companies that leverage this tool successfully to rapidly ramp in size. Since everyone is incentivized to stick to a few platforms, the network effect has the unintended consequence of making it more difficult to switch to the competition, reinforcing itself further as a result.

For e-commerce, there is Amazon. For video streaming, there is YouTube. For operating systems, there is Microsoft Windows and Apple macOS. For social media, there is Facebook and Twitter.

Finally, there is Yelp Inc. (YELP) for online reviews. We briefly touched on Yelp’s early years in our report on ZG.

Yelp started out as a crowdsourcing website that emailed your friends for recommendations on particular products or services. As the website gained traffic, it was then relaunched to allow anonymous users to provide business reviews, most notably on restaurants.

With the network effect, Yelp’s importance to people grew as its user base expanded. The greater the number of reviews, the more people relied on the site for information.

On the other hand, businesses were incentivized to participate in Yelp as well, since it basically offered free marketing to those that garnered positive reviews.

The firm has built a significant portfolio of reviews, 200 million cumulative reviews in all. But it looks like its network effect has not yet gained critical mass.

Yelp’s as-reported ROA levels and trend show that it is still trying to scale in its network effect. The firm has yet to grow profitability from its start-up stage. Investors believe that they are getting in before Yelp’s network effect has really taken hold. Based on as-reported ROAs, Yelp has only begun generating consistent earnings growth.

In reality, as highlighted by Uniform ROAs, the network effect already took place, and may already be fading.

Uniform ROA remains at robust levels, suggesting that their network continues to generate significant value for the company, though if the company can’t reverse its fading network effect thanks to competitors like Google’s involvement in the space, the stock may not be compelling.

Investors aren’t getting a start-up not yet priced for the inflection, they’re getting a company that is losing its competitive moats, which the market expects to continue.

Yelp Inc. Embedded Expectations Analysis – Market expectations are for Uniform ROA to decline, and management may be concerned about growth, strategy execution, and 2020 outlook 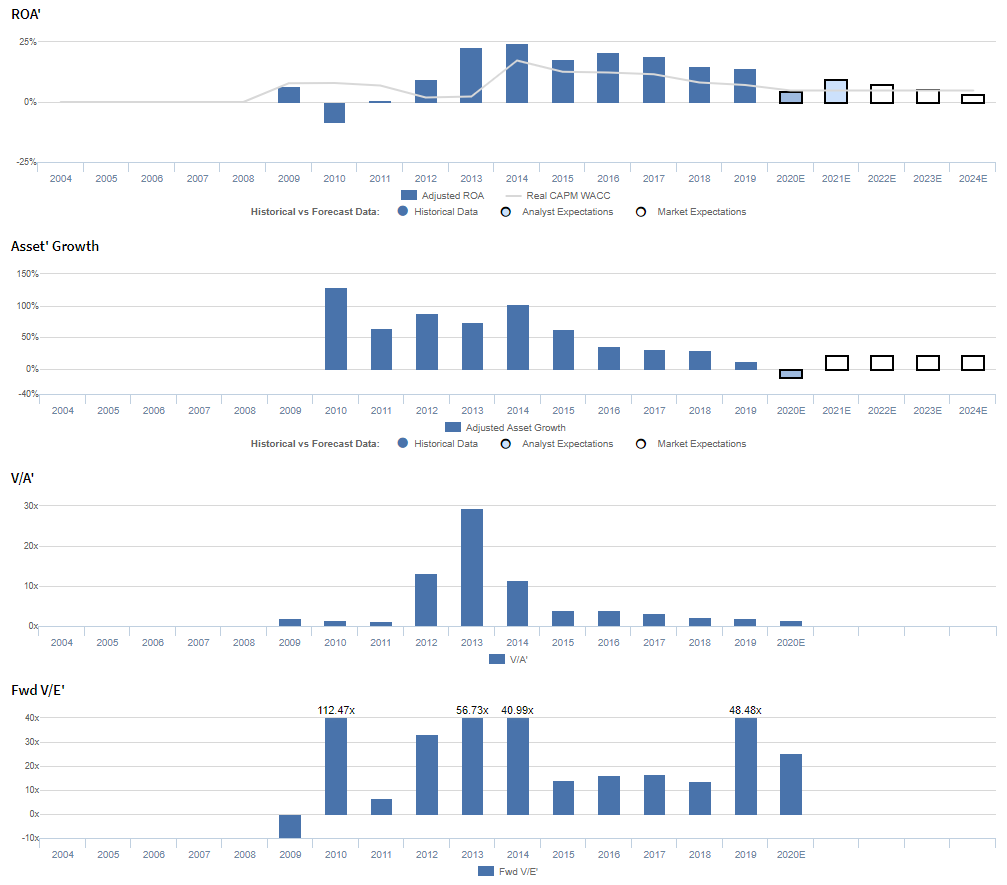 At these levels, the market is pricing in expectations for Uniform ROA to decline from 14% in 2019 to 3% in 2024, accompanied by 22% Uniform asset growth going forward.

Historically, YELP has seen volatile profitability, with Uniform ROA declining from 7% in 2009 to -8% in 2010 before inflecting positively and expanding to 25% in 2014. 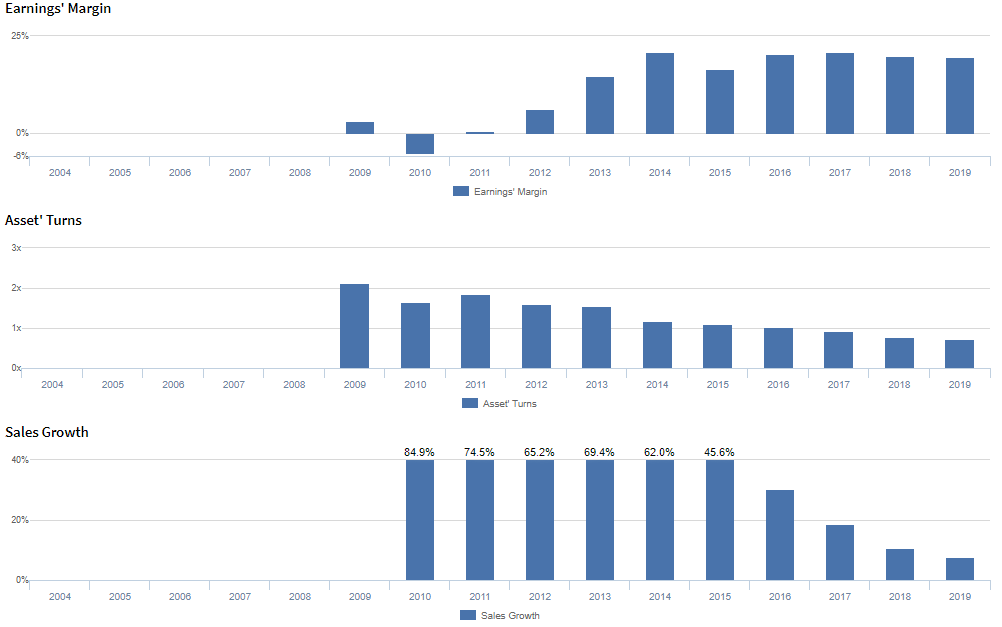 Trends in Uniform ROA have been driven by offsetting trends in Uniform asset turns and Uniform earnings margin. After declining from 3% in 2009 to -5% in 2010, Uniform margins improved to a peak of 21% in 2014.

At current valuations, markets are pricing in expectations for further declines in Uniform margins and Uniform turns.

Valens’ qualitative analysis of the firm’s Q4 2019 earnings call highlights that management may lack confidence in their ability to continue to execute their long-term strategic plan and sustain revenue growth associated with recent execution.

Also, they may be concerned about their ability to continue to grow their multi-location business and about their 2020 outlook overall.

As-reported metrics significantly understate YELP’s earnings margin, one of the key drivers of profitability. For example, as-reported EBITDA margin for YELP was 6% in 2019, substantially lower than Uniform earnings margin of 20% in the same year.

Moreover, as-reported EBITDA margin has been less than a third of Uniform earnings margin in each year since 2013, significantly distorting the market’s perception of the firm’s historical profitability.

As the Uniform Accounting tearsheet for Yelp Inc. (YELP) highlights, the Uniform P/E trades at 26.5x, which is above corporate average valuation levels but around recent historical averages.

High P/Es require high EPS growth to sustain them. In the case of Yelp, the company has recently shown 21% Uniform EPS growth.

We take Wall Street forecasts for GAAP earnings and convert them to Uniform earnings forecasts. When we do this, Yelp’s Wall Street analyst-driven forecast is a -70% decline in 2020 and 134% growth in 2021.

Based on current stock market valuations, we can use earnings growth valuation metrics to back into the required growth rate to justify Yelp’s $25 stock price. These are often referred to as market embedded expectations.

The company can have Uniform earnings shrink by 10% each year over the next three years and still justify its current stock price. What Wall Street analysts expect for Yelp’s earnings growth is above what the current stock market valuation requires in 2021.

To conclude, Yelps Uniform earnings growth is below peer averages. However, the company is trading above average peer valuations.