Startups generally have poor profitability, and therefore little to lose when they try new strategies. If new, transformative strategies work out, it could be a massive win for the company and shareholders, and if they don’t, the company already wasn’t generating cash flow.

This company appeared to have little to lose when it went after a big part of a market it hadn’t tackled yet. And yet the market punished it for its strategy shift. It appears the market reacted negatively because Uniform Accounting was showing a very different business that the market had liked before the shift, and was less interested afterwards.

A couple weeks ago, we talked about companies that go after transformative mergers to try to create value for shareholders.

Thermo Fisher was able to execute, and created massive value as a result. On the other hand, Time Warner and AOL destroyed significant shareholder value. Going after large M&A deals are a high-risk, high-reward way to transform a business.

Sometimes transforming a business doesn’t require an acquisition. Companies can choose an option with presumably lower risk, by just shifting strategy internally, rather than turning external.

In fact, we see this relatively often in startups. Startups need to be agile and be able to pivot strategy, even significantly, with relative ease.

As importantly, if not more, startups generally have less to lose in a pivot. These firms will often have negative economic profitability as they are trying to enter new markets or even create new markets. Making a strategic mistake could delay eventual economic success, but on the other hand, it wouldn’t be destroying something already built.

For instance, PayPal, the company that created luminaries like Peter Thiel, Elon Musk, Reid Hoffman, and Max Levchin, among others, succeeded due to a strategy shift.

The company was originally started as a solution to exchange money via Palm Pilot. While the general idea stuck, management at the company realized there was a much more massive market they could approach as a tool for any electronic transaction, not just for Palm Pilot.

After PayPal, co-founder Max Levchin saw another startup that could use funding, in the original Yelp.

At the time, in 2004, it was created as an automated system for emailing friends with recommendation requests. Although the company raised over a million dollars, with some from Levchin, the idea largely failed.

That was, until the founders Jeremy Stoppelman and Russel Simmons decided to shift strategy. They found their users enjoyed writing reviews, so they pivoted to the aggregator we know today, creating a very successful firm that’s almost synonymous with business reviews.

There are many examples of start-ups going through this re-invention. One in particular though is interesting to study, Zillow Group (ZG).

Since 2004, Zillow has built a business model of being a real estate window-shopping marketplace. Customers could go on and see what houses were for sale and look at pictures, understand pricing and what housing prices in an area were, and track markets, among other benefits.

Then in 2018, the real estate marketplace firm decided to not just own the marketplace, it also wanted to be a supplier. Being a place for buyers and sellers to find opportunities wasn’t enough.

It decided to offer mortgages. And then it decided it was going to buy and sell homes on its own. It was going to become more of an exchange than a market place, acting as a lender of last resort.

By the time investors digested the news, shares were down roughly 50% from highs seen earlier that summer.

That reaction was a surprise considering the context. Looking at as-reported return on assets (ROA), Zillow appears to be a startup with nothing to lose from a pivot, like Yelp or PayPal before it.

Zillow initially appears to be a startup trying to take share in a fractured market. If it already wasn’t making money, and it could take more share of the residential real estate market, it was a logical attempt to improve the business.

The reality though is that the market knew something as-reported metrics don’t reflect. Zillow did have something to lose by changing its business model.

When looking through the lens of UAFRS, it becomes clear Zillow already was a strong, established business. The company’s Uniform ROA had been profitable since 2011. This marketplace was doing an excellent job capturing market share and profiting from it. ROA had reached over 25% in 2015-2017.

This changed once the firm implemented its new strategy. Its returns have cratered as it has entered more capital intensive and risky businesses.

The market recognized in 2018 that if Zillow didn’t succeed, it would be destroying the value it had created over the prior decade and more from its platform. That’s why shares fell so sharply—the market was seeing through the noise of as-reported accounting.

Today, Zillow might appear cheap at first glance. Market expectations are not for any recovery in ROA, with stable returns. There’s limited reason for optimism though. ZIllow is only growing these lower-return businesses, and management lacks confidence in their fundamental outlook, suggesting it may take time before the firm can right the ship. 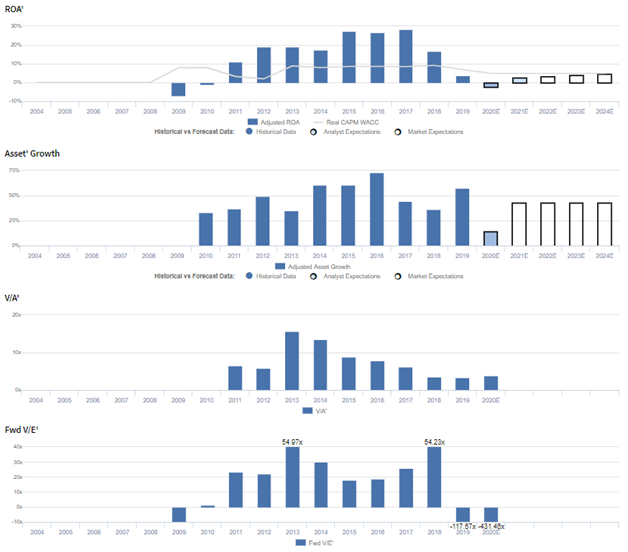 Zillow Group, Inc. Embedded Expectations Analysis – Market expectations are for Uniform ROA compression, and management may be concerned about innovation, their balance sheet, and customer experience

ZG currently trades near recent averages relative to Uniform assets, with a 3.9x Uniform P/B (V/A’). At these levels, the market is pricing in expectations for Uniform ROA to remain at 4%-5% levels in 2023, accompanied by 43% Uniform asset growth going forward.

Historically, ZG had seen somewhat cyclical profitability, with Uniform ROA rising from -7% in 2009 to 17%-19% levels from 2012-2014 before expanding to 27% in 2015, driven in part by the firm’s acquisition and successful integration of Trulia. However, Uniform ROA has since declined back to 4% levels in 2019, as the firm started its foray into mortgages.

Meanwhile, Uniform asset growth has historically been consistently positive and robust, ranging from 33%-73% in each year since 2010. 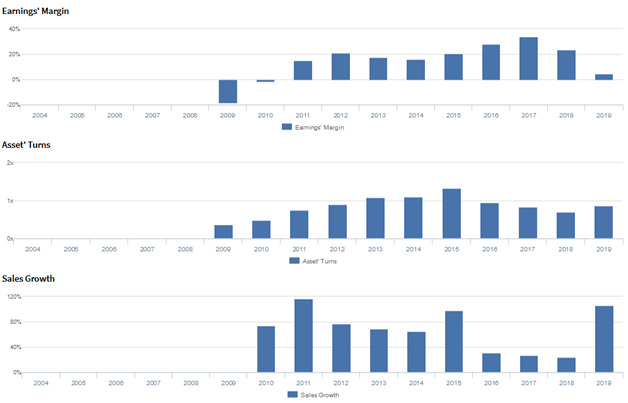 At current valuations, markets are pricing in expectations for Uniform turns to continue fading back toward historical lows, coupled with a slight improvement in Uniform margins.

Valens’ qualitative analysis of the firm’s Q4 2019 earnings call highlights that management is confident that their focus on cost discipline is yielding tangible results, that their learnings are a great lever to help nudge agents to become higher performers, and that their core business inputs suggest strong forward indicators.

However, management may be concerned about increased partner churn, their business model innovation, and the impact of ongoing testing and iterations across their markets and businesses.

In addition, they may lack confidence in their ability to sustain Q4 EBITDA and returns on homes sold performance, improve conversion rates, and continue to improve customer satisfaction. Moreover, they may be exaggerating the strength of their balance sheet, the potential of their Premier Agent opportunity, and the quality of their Tour It Now feature.

Also, they may lack confidence in their ability to expand IMT segment EBITDA margins, grow their unique user base, and provide a seamless integrated transaction experience for customers.

Finally, they may be concerned about the lack of software investments in real estate and Zillow Offers adjacent transactions such as titles, escrow, and mortgages.

As-reported metrics significantly understate ZG’s profitability. As-reported ROA for ZG was near -3% levels in 2018, lower than the Uniform ROA of 4%, making ZG appear to be a much weaker business than real economic metrics highlight.

Also, as-reported ROA incorrectly makes it appear that ZG saw negative profitability in four of the past five years, while Uniform ROA has shown generally robust profitability over the same period, misleading investors to believe the firm has been unable to generate consistently positive returns.

As the Uniform Accounting tearsheet for Zillow Group, Inc. (ZG) highlights, the Uniform P/E trades at -431.5x, which is tremendously below corporate average valuation levels and its own recent history.

Negative P/Es require high EPS growth to sustain them. In the case of Zillow Group, the company has recently shown a 94% Uniform EPS shrinkage.

We take Wall Street forecasts for GAAP earnings and convert them to Uniform earnings forecasts. When we do this, Zillow Group’s Wall Street analyst-driven forecast is a 1,184% and 117% decline in 2020 and 2021, respectively.

Based on current stock market valuations, we can use earnings growth valuation metrics to back into the required growth rate to justify Zillow Group’s $57 stock price. These are often referred to as market embedded expectations.

In order to justify current stock prices, the company would need to have Uniform earnings grow by 51% each year over the next three years. What Wall Street analysts expect for Zillow Group’s earnings growth is far below what the current stock market valuation requires.

Furthermore, the company’s earning power is below the corporate average. Also, intrinsic credit risk is 210bps above the risk-free rate. However, with cash flows that are 2x higher than its total obligations including debt maturities, capex maintenance, and dividends, this would signal average credit and dividend risk.

To conclude, Zillow Group’s Uniform earnings growth is far below peer averages. Therefore, as is warranted, the company is trading below average peer valuations.