MONDAY MACRO: Happening at 4 PM today (3/21)—Stock Markets and Crises 2022. Also…Philippine GIR is at its highest in 10 years

The mainstream media can’t wait to slap the word “crisis” onto anything that will drive knee-jerk viewership to their broadcasts and websites:

With the Philippines just posting its highest yearly gross international reserves level this month, should we be worried about all these various crises in the world?

Well-known and respected stock trader Jesse Livermore once said, “There is nothing new in Wall Street. There can’t be because speculation is as old as the hills. Whatever happens in the stock market today has happened before and will happen again.”

As students of the markets, we see this happen all the time. So, we need to cut through the noise of mainstream media so we don’t get caught up in the panic it is causing.

Join us online this afternoon in this insightful webinar about stock markets and crises, as Professor Joel Litman is back in Manila for the first time in more than two years.

Prof. Litman will talk about some of the things bothering most investors now:

Hear firsthand about the Crises discussions that Prof. Litman has been having with his clients and readers in the US–which include 230 of the largest investment managers in the world (and all ten of the top ten).

This event is in collaboration with the Shareholders’ Association of the Philippines, Inc. (SharePHIL).

In the meantime, we take a look at one of the Philippines’ economic indicators directly affected by changes in the global economy.

The Bangko Sentral ng Pilipinas (BSP) is tasked with formulating and implementing policy for the Philippines’ money, banking, and credit sectors to promote price stability. One tool it uses is its international reserves, which are external assets that are controlled by a country’s monetary assets.

Specifically, the Philippines’ gross international reserves have been rising for the past 10 years, shooting up to a high of $107.98 billion in February 2022 from $105.16 billion in the same month last year. 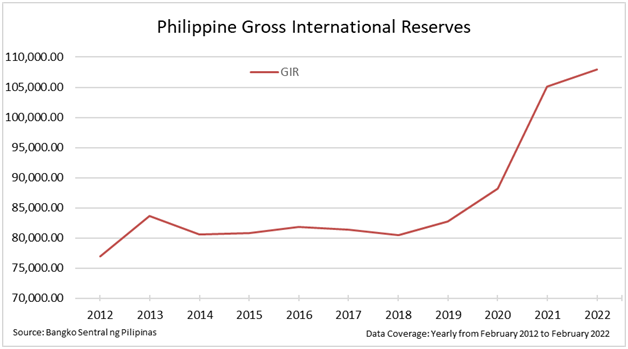 Recent rises in the country’s gross international reserves can be attributed to the rising price of gold in international markets. In addition, this increase is also attributable to the central bank’s net income from investments abroad.

The 0.26% increase in the country’s reserves from $107.69 billion in January of the same year comes from the 8.88% gold partition of the reserves. The biggest allocation of the reserves is still in foreign investments, which round the portfolio out at 86.23%.

Gross international reserves are also used to shield the country from liquidity shocks.

For example, the Philippine government used its reserves to service its foreign debt obligations in September 2021. At the time the foreign reserves could service 7.6 times the country’s short-term external debt. Currently, the same reserves have increased that number to 8.4 times.

Looking forward, we can anticipate sideways movement with a downward bias in terms of assets for these foreign reserves. The upward movement of gold may be undone as the Russian Ukraine conflict approaches peace talks.

The Philippines currently holds a Baa2 rating from Moody’s, which is just 2 notches above speculative ratings. If the country slips into the speculative zone, foreign investors may find themselves constrained from investing in the country’s securities due to fund mandates that may prevent them from deploying capital.

So, while the country’s high gross international reserves will help protect the country from external shocks, keeping it at high levels may not always be a good thing. The BSP would find it more difficult to fulfill its mandate as more liquid investments would be needed to intervene in the country’s balance of payments or foreign exchange markets.

About the Philippine Markets Newsletter
“The Monday Macro Report”