MONDAY MACRO: Infrastructure spending has ramped up in the last six years, but the Build Build Build program still fell short of its ambitious targets

Since 2016, the Philippines’ public infrastructure spending makes up 4% to 6% of the country’s gross domestic product (GDP). This is a credit to the outgoing administration’s Build, Build, Build, (BBB) program.

With the BBB program as the center of its economic development plan, has the government stayed on track of its infrastructure spending targets?

The total GDP of a country can be accounted for using the expenditure approach. Under this method, Total GDP = Consumer Spending + Investor/Business Spending + Government Spending + Net Exports. While all are equally important, today we will be focusing on the government spending component, particularly in infrastructure.

Infrastructure such as roads, airports, and buildings, among others, serve an important economic and social purpose for a country.

It creates job opportunities for workers, facilitates domestic and international trade, connects people from city to city, or country to country, furthers innovation through the advancements of energy systems or broadband networks, and overall drives economic growth.

The BBB program is an economic development plan that focuses on infrastructure development to sustain economic growth through job creation and improvement of the quality of life of urban and rural communities.

The goal is to accelerate infrastructure spending from 2%-4% during the Aquino administration, to about 6%-7% by the end of the Duterte administration, with an overall cost of around PHP 9 trillion.

So far, over 200 airports, 440 seaports, 6,800 bridges, and other essential roads and highways such as sections of the TPLEX, NLEX, and the Skyway have been built. How does that translate into numbers, and has the government stayed on target? 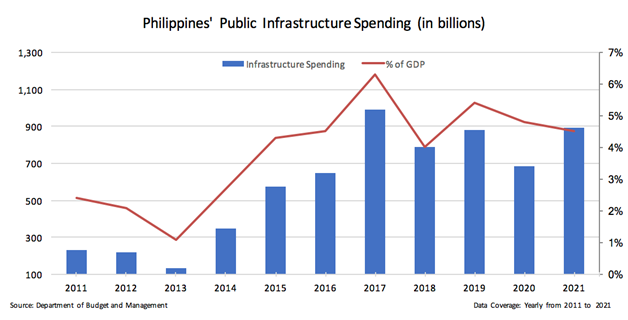 In 2017, the public infrastructure spending of the Philippines reached PHP 991.3 billion, 6.3% of the country’s GDP. This is a year-over-year increase of 52.5%, and is the highest spending level during the six years of the incumbent administration.

The number eventually plunged to PHP 681.1 billion in 2020. The government had much more pressing financial concerns to attend to, primarily related to the COVID-19 response, which was why a large portion of the funding for capital outlay projects was redirected to pandemic expenditures.

In addition, lockdown restrictions imposed by the government caused delays in the execution of other projects.

In 2021, the public infrastructure spending bounced back strongly with a 32% annual increase to PHP 895.1 billion, 4.5% of the country’s GDP.

Currently, the infrastructure spending for Q1 2022 rose 4% year-over-year to PHP 252.8 billion despite the slowdown in project rollouts due to the ban on the execution of new projects in light of the election.

In this case, while increased infrastructure spending does help accelerate GDP growth and improve social conditions, there are other important economic factors to consider such as the possibility of increased taxes and/or debt to fund the projects.

About the Philippine Markets Newsletter
“The Monday Macro Report”