In 2020, we saw many economies around the world enter recessions. Even the strongest economies fell amid the pandemic. For one, the US economy suffered multiple setbacks throughout the year, causing its currency to decline in value.

On the other hand, Asian currencies such as the Chinese yuan, the Japanese yen, and the Philippine peso rallied in 2020, benefiting from the continued negative sentiment against the US dollar.

Before we can conclude that this currency appreciation is a good thing for the Philippines with how cheap imports are becoming, we have to keep in mind that too much of a good thing can be bad.

At first glance, the foreign exchange market appears too volatile for anyone to be able to glean any helpful insights. Like many economic indicators, forex needs to be analyzed by understanding the factors influencing its movements.

In one of our Monday Macro articles, we talked about how foreign exchange rates are affected by a variety of factors including interest rates, inflation rates, the political environment, and ease of doing business in the country, among others. Today, we will talk about two other factors: supply and demand, and sentiment.

For most countries, the US dollar is that foreign currency, and looking at the various currencies’ performance against the dollar tells us a better story of their relative values.

Looking at the 2020 performance of selected Asian currencies pegged to the US dollar, all have appreciated by year-end.

Moreover, the US dollar index, which measures the currency against six major world currencies, declined by nearly 13% since its 2020 high last March. This means the reason for the significant currency appreciation for other currencies is the US dollar’s poor performance in 2020.

March 2020 was a volatile month in the foreign exchange market. From late February to early March, the dollar sharply declined due to speculations on the possibility of an interest rate cut announcement by the US Federal Reserve. This led to investors unwinding their carry-trade funding.

A carry trade is a strategy whereby an investor invests in a country that has a high-yielding asset with a currency that offers a low paying bond yield. Usually, carry-trade funding is performed by the Japanese yen (JPY) as Japan is known for keeping a stable near-zero interest rate monetary policy.

This is also the reason why the JPY sharply rose in that period. The demand for the Japanese yen rose as investors converted their dollars to yen to pay off the debt used to finance their USD-denominated investments.

Within the same month, the Bank of Canada, the Bank of England, the Bank of Japan, the European Central Bank, the US Federal Reserve, and the Swiss National Bank announced a coordinated action to improve USD liquidity. This move helped the dollar to momentarily recover.

By the end of March, the value of Asian currencies again shot up when the Conference Board reported a sharp decline in the US consumer confidence index to near its three-year historical low levels.

The dollar weakened at that time as investors became concerned about the near-term economic outlook given the unfavorable consumer spending. When consumer confidence is weak, economic activities will likely also taper.

Though demand for the US dollar weakened by the end of March, sentiment slightly recovered. However, the recovery was short-lived as Asian currencies once again increased owing to investors’ pessimistic outlook on the US economy. Investors expected the US Federal Reserve to conduct more interest rate cuts to cushion the economy.

At year-end, the Philippine peso (PHP) was one of the Asian currencies with the highest appreciation against the dollar. On its last trading day of 2020, the foreign exchange market closed at 48.38 PHP/USD from its year high of 52.10 PHP/USD, appreciating by nearly 8%.

There are benefits to a strong domestic currency. These include cheaper imports and a lower cost of foreign debt servicing.

The downside is that the strong domestic currency can lead to more expensive exports, a less competitive Business Process Outsourcing (BPO) sector, lower value of OFW remittances, and weaker tourism.

As the Philippine economy relies heavily on the BPO sector and OFW remittances for growth, the concerns outweigh the benefits of having a strong peso. The Economic Report by the Senate Economic Planning Office discussed in greater detail how the high appreciation of the PHP was detrimental to the Philippine economic growth in 2007. 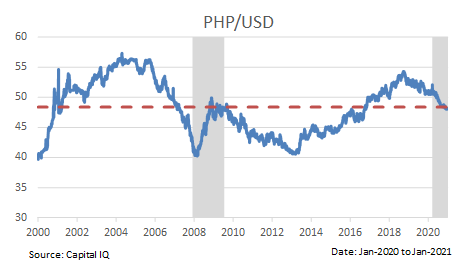 Downward pressure on the US dollar will also likely continue, at least until the first quarter, as the global economy continues to combat the COVID-19 pandemic. Investors are still looking for signs of recovery in the US before sentiment improves.

However, at current levels, this PHP currency gain is not something to worry about yet. Historically, the PHP/USD 20-year low was at PHP 39.69 at the height of the Global Financial Crisis. At current levels, its FX rate is at its historical average level.

In addition, we have talked about in our July 13, 2020 Monday Macro report that with its ample gross international reserves (GIR), the Philippines is capable of paying for imported goods and services, settling maturing obligations, and transacting dollars to prevent sharp currency movements, in case of external shocks.

As of November 2020, the Philippines’ current GIR can cover 11.2 months’ worth of imports of goods and payments for services and primary income. This is an improvement from the GIR level last June 2020 of 8.4 months.