“Cut through the heat!” ― Find out how this brand gave people a REFRESHING experience at the beach! [Fridays: Gorillas of Guerrilla Marketing]

What refreshes you on a really hot summer day?

An ice-cold can of soda?

During the summer of 2012 in Brazil, when temperatures soared to as high as 40 degrees Celsius, this beverage brand made a creative campaign that refreshed beachgoers not just on the inside of their bodies but also on the outside.

Sprite is a colorless lemon and lime-flavored soft drink created by The Coca-Cola Company. It was first developed in Germany in 1959 and then introduced in the US in 1961 as a competitor to the American brand 7Up. 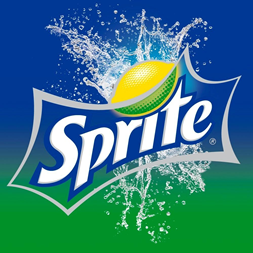 Today, Sprite is distributed in 190 countries around the world and comes in various flavors such as cranberry, cherry, grape, orange, and vanilla.

Some people associate summer with enjoying the sun at the beach―planning their summer getaway, packing their things, going on a road trip, taking Instagram-worthy photos, and having a fun day at a beach resort.

Then, after some time lounging, swimming in seawater, and digging in the sand, there are 2 things they usually want: A cold shower and a refreshing drink.

To address this summer-related consumer insight, Sprite came up with…

The shower was designed as a giant Sprite dispenser, complete with the famous green and yellow logo of the brand. 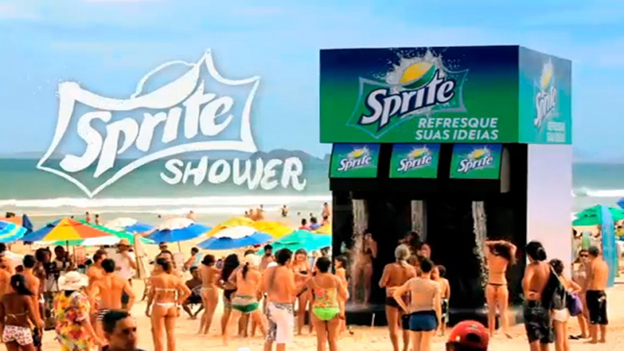 This idea was conceptualized with the help of advertising company Ogilvy Brasil.

When the campaign team finished setting up the shower at a beach in Rio de Janeiro, beachgoers were invited to stand on the platforms. Once they pushed the giant levers…

A refreshing shower was poured out on them! 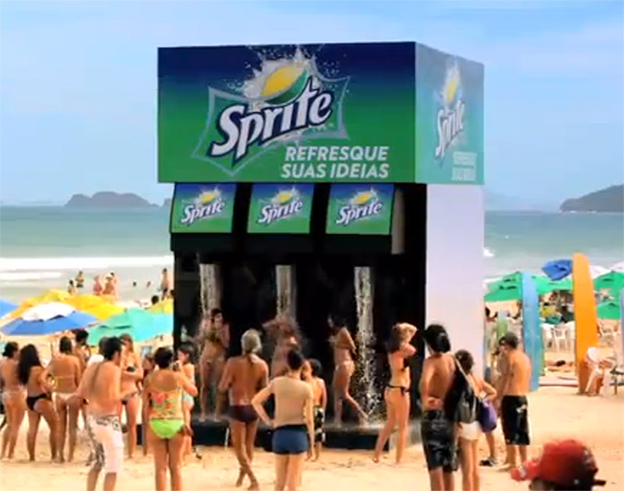 A lot of people flocked to the area where the giant Sprite dispenser stood. Some even asked their companions to take a photo of them while being drenched under the unconventional beach shower!

Wait a minute. You’re wondering if the giant dispenser poured out the REAL Sprite beverage, aren’t you?

Just to clarify: The shower poured out freshwater, not real Sprite.

It’s refreshing… and not sticky on the skin!

Aside from the giant dispenser, the campaign team also gave free bottles of Sprite to beachgoers. The real deal―not water!

Since summer days in Brazil could get really hot and humid, people were looking for something to help them cool down. At that time, Sprite knew they wouldn’t reject receiving an ice-cold bottle of soda for FREE.

For 1 week, the giant Sprite dispenser showered more than 1,500 beachgoers per day.

Think about all those who witnessed Sprite’s campaign firsthand, as well as the people they talked to about it. Surely, after the refreshing experience they had, they would always remember the giant dispenser or the exciting stories they heard about it.

Imagine being the top-of-mind brand for soda drinkers!

Here are the results of the campaign:

Of course, this GIANT guerrilla marketing campaign from Sprite and Ogilvy Brasil wouldn’t go unnoticed by the industry.

During the Cannes Lions International Festival of Creativity in 2012, the campaign won 3 awards:

“Why provide a place to shower for your customers and prospects?”

For Sprite, there were two answers…

First, the giant dispenser shower was talked about by so many people. Sprite could have just given away free drinks to beachgoers, but it would miss out on all the fun interaction with its target market.

Think about this: Not everyone would usually rush home to tell their family members and friends about receiving a free drink on the beach, but they would be quick to share their story of being showered by a giant soda machine.

Second, it created important mental associations with the brand. If beachgoers were simply handed a refreshing beverage on a hot day, they’d just drink it without thinking twice.

What happens after that? Nothing. It just went down their stomach. End of story.

On the other hand, if they feel refreshment both inside (free Sprite drinks) and outside (giant soda machine shower) of their bodies, they’d be more likely to associate that brand with a positive feeling. It’s all about the experience.

So… what can you learn from Sprite’s campaign?

One of the key takeaways is that marketing your brand is more than just getting the word out. It’s also about bringing creative ideas to life and making sure it sticks in your target market’s mind.

Your campaign might not get them to immediately drop what they’re doing and run to your store, but it can be a big part of building a loyal customer base throughout the years.

If you want to “shower” your prospects and customers with love and attention, be creative in your marketing campaigns and plan it well.

The execution and results you get will say a lot about how committed you are towards building good relationships with your target market.