“I do!” — This company has a marketing proposal that you wouldn’t want to miss! [Fridays: Gorillas of Guerrilla Marketing]

We’ve all seen how marriage proposals work in movies or TV shows.

— a couple going out for a candlelight dinner, drinking wine, slow dancing under the moonlight, and then, the guy will get down on one knee and confess his love to the “girl of his dreams.”

A lot of people have different takes on marriage proposals. Some like it extravagant, while some prefer just a simple one. Others might not even want to propose or be proposed to.

Despite those differences, one thing stands out:

A formal marriage proposal is incomplete without a ring.

Have you ever wondered who started the idea of using diamonds as a staple for engagement rings?

It’s no other than this company!

De Beers is an international corporation that specializes in diamond mining, retail, trading, and industrial manufacturing.

From its establishment in 1888 until the beginning of the 21st century, De Beers controlled 80% to 85% of rough diamond distribution. As of 2020, the company is the second largest diamond producer in the world, next to Russian diamond miner ALROSA.

In 1938, De Beers teamed up with Philadelphia ad agency N.W. Ayer to encourage Americans to buy diamonds. However, there was just one problem…

During those times, the global economy was just recovering from The Great Depression and in the US alone, the total diamond sales had declined by almost 50%.

In order to find a way to advertise diamonds amid the economic condition, N.W. Ayer conducted an exhaustive market research to figure out what Americans thought about diamonds. What they discovered was people considered the precious stones a luxury item that’s reserved only for the “super wealthy.”

The ad agency aimed to change this mindset by linking diamonds with “something emotional”―LOVE AND MARRIAGE.

According to an article from American newspaper The New York Times, N.W. Ayer’s game plan was to:

In order to achieve this, the ad agency’s publicists wrote newspaper columns and magazine stories about celebrity proposals with diamond rings to make it look like diamonds were everywhere.

Even fashion designers talked about the new diamond trend on radio segments!

“A Diamond is Forever”

Gerety came up with this line one particular night while she was preparing to sleep. Before completely drifting away, she realized she forgot to brainstorm about her topic for the next morning’s meeting.

For the sake of having something to present, she sleepily scribbled something down on a piece of paper without putting much thought into it. She only gained full awareness of what she wrote when she was already presenting in a meeting with De Beers’ management team.

Talk about making a huge impact while barely awake! 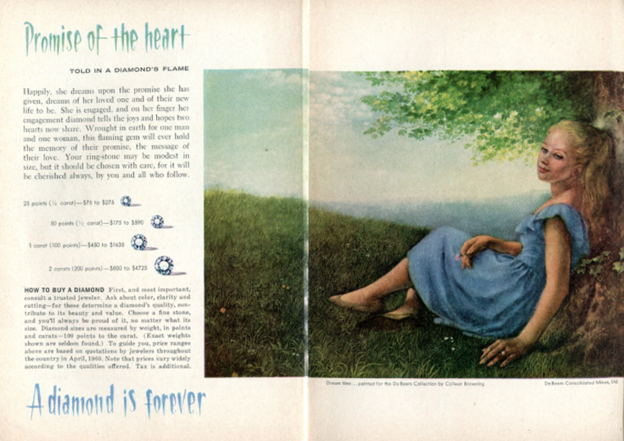 Gerety’s line was chosen as De Beers’ slogan as it perfectly encapsulated the sentiment De Beers was going for―a diamond, just like one’s marriage, is eternal.

At the beginning of N.W. Ayer’s campaigns for De Beers in the late 1930s, the suggested spend on a diamond engagement ring was equivalent to a person’s one-month salary. Then, in the 1980s, a new campaign by the company reset the norm to two months of a person’s salary.

In its 1980s campaign, De Beers wrote, “Isn’t two months salary a small price to pay for something that lasts forever?” 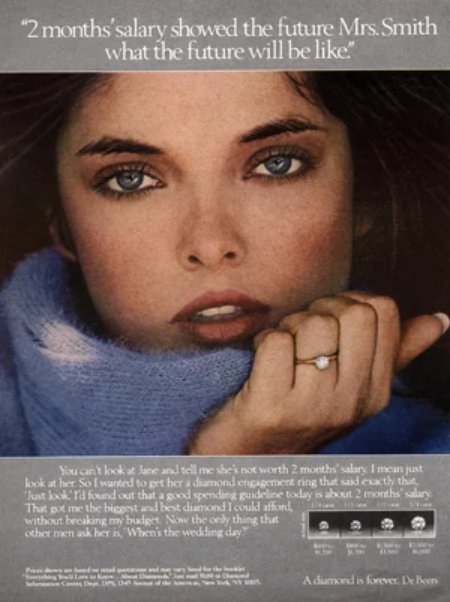 Every one of the company’s campaigns also featured an educational tip called, “How to Buy a Diamond.”

In just four years since the campaign started (from 1938 to 1941), De Beers recorded a 55% increase in diamond sales. That was for the US market alone!

An article from The Atlantic also mentioned that between 1939 and 1979, De Beers’ wholesale diamond sales in the US grew from USD 23 million to USD 2.1 billion. In 1951, 8 out of 10 brides in the US had a diamond engagement ring.

Aside from that, over those four decades, the company’s ad budget increased from USD 200,000 to USD 10 million per year.

In 1999, the De Beers slogan, “A Diamond is Forever,” was awarded by global media brand AdAge as “The Number 1 Slogan of the Century.”

By focusing on the “eternal emotional value” of diamonds, De Beers and N.W. Ayer were able to transform the public opinion around diamonds―from being just a luxury item to an “essential part of courtship and marriage.”

As a business owner or marketer, what’s one lesson you can learn from this campaign?

Just because a “need” for your brand’s products doesn’t currently exist, it does not mean that you can’t create a “new need” (or want) using the right marketing strategy.

In the case of De Beers, since diamonds are obviously not a basic necessity, the company positioned them as something that makes marriages extra special and “eternal.”

Admit it. If you’ve been proposed to or are proposing with a real diamond ring, wouldn’t you want to display it for the world to see?