Score that goal! What can you learn from this company’s tactics to win consumers’ loyalty and trust? [Monday: Marketing Marvels]

Are you looking for ways to scale your marketing efforts?

Why not try purpose-driven messaging?

“Participating in cultural conversations with global implications shows consumers that your brand is invested in creating a better world, not just making profits.”

Furthermore, purpose-driven marketing helps form partnerships with other brands that are dedicated to the same mission.

Heineken is a Dutch brewing company that was founded by entrepreneur Gerard Adriaan Heineken in 1864.

As of 2020, the brand is the #1 brewer in Europe and the second-largest brewer in the world by volume.

How did Heineken expand its reach and increase its customer base through the years?

One is through purpose-driven messages and campaigns!

Heineken invests over 10% of its media budget on responsible consumption-focused messaging. This includes using the company’s identity and unique position to address alcohol-related accidents and illnesses.

Below are some of Heineken’s creative campaigns that resonated with consumers across the globe:

Heineken’s “Worlds Apart” video in 2017 is an example of controversial marketing done right.

The short film began with a social experiment that featured pairs of people with opposing beliefs. The campaign team asked these strangers to stay in one room and finish an activity together like fixing broken chairs, tables, etc.

Note: The conversations in the video were entirely unscripted!

After 90 minutes, a speaker would reveal that the pairs have contradicting political views. Upon the revelation, it was all up to these people to decide whether they would like to discuss their views over a bottle of Heineken beer or leave.

Every pair chose to sit down and discuss their opinions with each other, driving home the brand’s goal to “promote openness and unite people all over the world.” 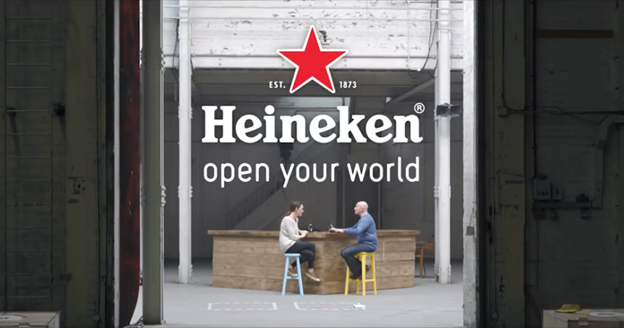 In just 2 days after it was posted on YouTube, the “Worlds Apart” video garnered 14.5 million views and 3 billion media impressions.

The campaign even won a Bronze Lion in the Cyber category at the Cannes Lions Festival in 2017!

See how Heineken appeals to its target market through these campaigns?

By addressing the risks associated with excessive alcohol consumption, taking advantage of controversial marketing, and creating strategic ads using consumer insights, the brand is able to demonstrate its commitment to responsible use of its beverages.

Another takeaway from the company’s marketing strategy is this:

Aside from these clever messaging tactics, what else is Heineken optimizing to attract new customers?

According to Heineken’s study in 2018, many football enthusiasts watch the UEFA Champions League through digital devices only.

Meanwhile, statistics from the market research agency Blauw Research shows that 8 out of 10 fans watch the league using at least one digital channel (live streams or social media).

Of these fans, Heineken discovered that many were “light beer users” (consumers who buy the brand’s products occasionally). They were the company’s ideal target market to increase penetration in the digital sector.

To reach this group of consumers, Heineken ran a global direct-to-consumer initiative called “Drinkies” from 2018 to 2019. 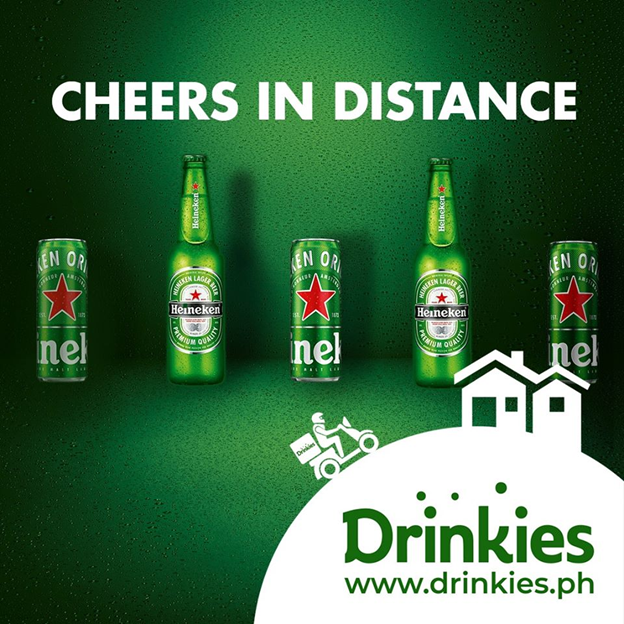 This was an e-commerce channel that enabled cold Heineken beer and snacks to be delivered door-to-door within an hour of ordering.

During the UEFA Champions League’s knock-out stage in spring 2019, Drinkies saw a 5.6% lift in sales. This was especially the case when the football team, AFC Ajax was playing!

In the past five years, Heineken N.V. has recorded revenues of:

According to Walter Drenth, Heineken’s Global CMO for Global International Brands, the company will continue to steer its marketing campaigns through purpose-driven messages while also maximizing the use of advanced technology.

Heineken N.V. (HEIA:NLD) makes for a great case study that we come back to regularly. One great reason?

So, how well has Heineken been growing its business in the past years?

The blue bars in the chart above represent Heineken’s earning power (Uniform Return On Assets). Heineken has seen generally stable and improving profitability. Its Uniform ROA ranged from 7% to 14% in the past sixteen years, or an average of 11%. Uniform ROA is at 13% in 2019.

The orange bars are the company’s as-reported financial information. If you relied on these numbers, you will see a company with understated profitability. As-reported ROA (return on assets, a measure of earning power) only ranged from 4% to 8% in the past sixteen years. Its ROA in 2019 was only at 5%, which is almost 3 times lower than its Uniform ROA in 2019.

The numbers show that Heineken has been doing well and making a profit.

As a business owner or marketer, what can you learn from the company’s marketing and communications strategies?

Just like Heineken, doing so will help you and your brand “Brew A Better World”…

… and win the hearts of new and loyal customers who will help spread positive words about your brand with their personal networks!