In our recent Institutional Daily articles on Range Resources and on Ford we highlighted how important a company’s book assets are as a floor to valuations. Generally, companies do not trade below 0.7x their Uniform (UAFRS) book assets.

The one important caveat we highlighted in the Ford article is valuations tend to not trade at a significant discount to book asset values unless the company is a significant bankruptcy risk.

When companies are close to bankruptcy, or in bankruptcy, the company can trade at valuations well below that 0.7x level. Equity investors are generally wiped out, and debt investors on average collect 40 cents per dollar of debt, so valuations decline ahead of a bankruptcy.

At Valens, some of our best longer-term equity calls have been identifying companies that the market thought were going bankrupt, with high CDS prices and high bond yields, and low Uniform price-to-book asset (V/A’) ratios, and identifying when they weren’t actually going to go bankrupt.

We use our Credit Cash Flow Prime analytics and Intrinsic CDS calculation to identify these companies.

But it’s not just investors who can benefit from being savvy in investing in these companies. Competitors can too.

Earlier this month, on December 3rd, Cleveland Cliffs (CLF) announced that it was acquiring AK Steel (AKS) for $3.6 billion. It would pay $1.1 billion for AK Steel with Cleveland Cliffs equity, and would refinance and pay down all AK Steel’s debt.

Initially the market didn’t love the move. Cliffs stock fell from $8.41 the day before the deal was announced to $7.51 as of the close of December 3rd. Who really wants to support a steel and iron ore miner taking on more debt and consolidating a bad industry? Especially when both the acquirer and target have a 4%-5% Uniform return on assets (ROA). Neither are exactly master operators in a low return commodity business.

Part of the reason the market probably liked this deal is AK Steel was priced for bankruptcy, and now they’re definitely not going bankrupt. At least not any time soon.

Before the acquisition was announced, AK Steel was trading at below 0.6x V/A’. As we mentioned, absent bankruptcy, it is rare for companies to trade well below 0.7x. That is a massive discount on assets.

We already had been highlighting to clients for a while that AK Steel’s credit was much safer than the market recognized. The company’s 2025 bonds were trading at a 10.1% yield as recently as November 24th, when we wrote a credit report on the name. At the time, we were highlighting that the fair value of those bonds yield was closer to 7.27%, much below where they were trading.

A 10% yield signals highly elevated risk of bankruptcy for a company. A company with a 7% yield on their bonds is certainly not investment grade, but it is much safer.

Now, unsurprisingly, those bonds are trading at a 7.24% yield to worst, as the market has come off the cliff in terms of expecting imminent bankruptcy. The credit market has reacted appropriately to the reduced risk of the company.

For Cleveland Cliffs to see their stock rise further, they don’t have to be a great operator, and extract massive savings from the combined companies.

All management needs to do is continue to show the market the AK Steel isn’t going to go bankrupt post-acquisition, and the stock will rise, because of how cheaply they bought AK Steel.

They bought a company where the market was pricing everything to go wrong, and thanks to them stepping in and standing behind the company’s credit, that isn’t a risk anymore.

Even better for Cleveland Cliffs, just before they announced the acquisition, on AK Steel’s most recent earnings call, management showed signs of being confident on getting a handle on pension plan and regulatory issues. They also showed confidence about operational trends.

Do you want to hear when we see a company where the company is priced for imminent bankruptcy and we identify it’s not, meaning it could have significant equity upside?

In 2015, AMD was priced for bankruptcy, and our Uniform Accounting and fundamental analytics signaled the company’s credit was much safer than investors realized. We highlighted in Barron’s that we thought it was a home run, it was on our Conviction Long Idea List of our top equity ideas.

At the time, the stock was at $2.50, within 2 years it was around $12.50. The company’s V/A’ traded up from well below book valuations to something more reasonable. Since then of course the AI and crypto craze have taken the stock to $40. But before that bubble started inflating, it was understanding AMD’s real credit risk that got it on our conviction long idea list and got clients a home run idea.

Right now we have a limited time offer for access to our Conviction Long Idea list, our best equity ideas, including ideas like AMD. You can receive it and our Market Phase Cycle™ macro report as a special holiday bundle, at a low price we’ve never offered before.

You can learn more about the offer in the link above, or by clicking here.

Market expectations are for continued weakness in Uniform ROA, but management is confident about their pension plan, regulation, and third quarter performance 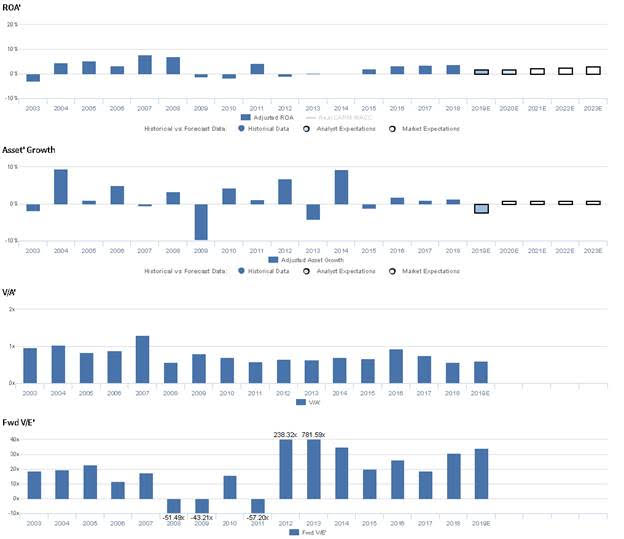 AKS currently trades at a material discount relative to UAFRS-based (Uniform) Assets, with a 0.6x Uniform P/B. At these levels, the market is pricing in expectations for Uniform ROA to fall slightly from 4% in 2018 to 3% through 2023, accompanied by 1% Uniform Asset growth going forward.

Historically, AKS has struggled to sustain profitability near cost-of-capital levels. From 2003-2008, Uniform ROA improved from -3% to 8%. However, following the Great Recession as competitors have flooded the market, Uniform ROA has been muted, ranging from -2% to 4% since 2018. Meanwhile, the firm has historically seen volatile Uniform Asset growth, positive in 11 of the past 16 years, while ranging from -10% to 9%. 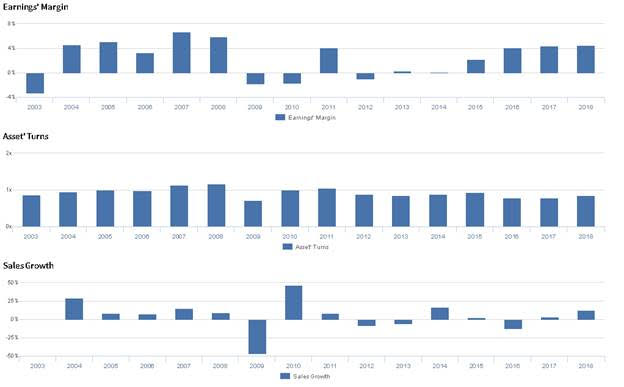 Valens’ qualitative analysis of the firm’s Q3 2019 earnings call highlights that management is confident they have reduced their pension plan’s exposure to volatility, and that they follow U.S. environmental regulation to the best of their ability. Furthermore, they are confident their third quarter met expectations despite challenging market conditions.

Uniform Accounting metrics also highlight a significantly different fundamental picture for AKS than as-reported metrics reflect. As-reported metrics can lead investors to view a company to be dramatically stronger or weaker than real operating fundamentals highlight. Understanding where these distortions occur can help explain why market expectations for the company may be divergent.

Historically, as-reported metrics significantly overstate AKS’s asset efficiency, a key driver of profitability. For example, as-reported Asset Turnover for AKS was near 1.5x levels in 2018, materially higher than Uniform Asset Turns of 0.9x, making AKS appear to be a much stronger business than real economic metrics highlight. Moreover, since 2010, as-reported Asset Turnover has been around 50% higher than Uniform Turns, significantly distorting the market’s perception of the firm’s historic asset efficiency.

Today’s tearsheet is for Costco. Costco trades at a premium to market average valuations. The company has recently had strong 15% Uniform EPS growth. EPS growth is forecast to slow significantly going forward, to low-to-mid single digit levels. At current valuations, the market is pricing the company to see earnings growth return to prior double digit levels going forward.

The company’s earnings growth for 2020 is forecast to be below peers, and the company is also trading at a premium to peer average valuations. The company has strong returns, and no risk to their dividend.