Credit standards are rising fast, here’s why we aren’t heading for a liquidity crisis

While we haven’t seen this level of tightening since the Great Recession, we’re much less likely to see a liquidity crisis this time around.

Today, we’ll take a look at what has changed over the last quarter and what that means for our eventual economic recovery.

Much like how Jesse Livermore would monitor credit health by personally surveying banks, the Federal Reserve conducts a quarterly survey to understand if banks are tightening or loosening their lending standards.

Coming out of the Great Recession, banks had every reason to be more wary about issuing commercial and industrial (C&I) loans.

It was one of the worst financial collapses since the Great Depression, and risky bets on the housing market and synthetic investment products blew a hole in our financial system.

But after dramatic tightening of credit through the crisis, by late 2009, banks already began loosening their lending standards in aggregate. Lending standards continued to ease or stay flat for the most part through Q4 2019. 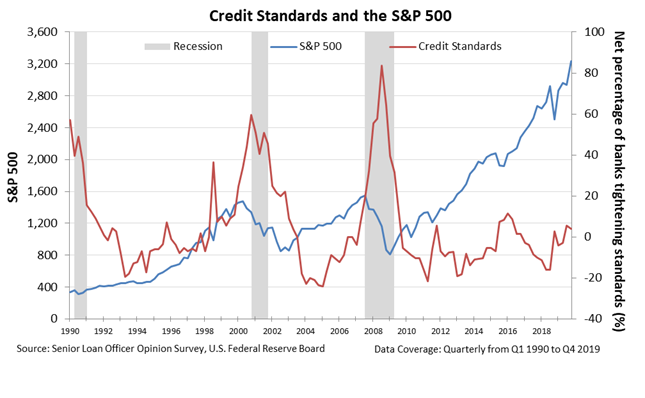 That said, as the Great Recession showed, banks tend to react quickly to economic uncertainty, such as in Q1 2020 due to the pandemic.

Credit standards are once again on the rise, with a net of 41.5% of banks reporting stricter standards for large and middle-market firms in the April 2020 survey. 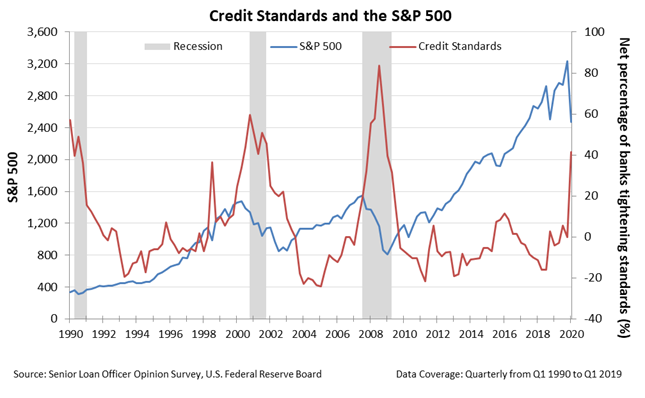 We haven’t seen these levels of tightening since the Great Recession. We’re of course currently in the middle of a recession, but based on what we’ve said before, that should set off alarms.

However, several underlying factors are slightly different this time around.

First, as we highlighted in our May 11th Investor Essentials Daily, U.S. corporations entered the pandemic with a historically strong combination of earnings, cash reserves, and revolver availability.

Unlike in several of the previous recessions, U.S. corporations weren’t facing debt maturity headwalls and liquidity constraints heading into the recession. This recession was not caused by credit issues.

This means that tightening credit standards haven’t been as impactful in the short-term.

Also, corporations have been able to actively access the credit markets since March to build even more liquidity than they already had. Investment grade corporations have issued more than $1 trillion in debt since the pandemic struck. High yield credits had 2 of their highest months of issuances in some time in April and May of this year.

Because of how they entered the crisis and the credit availability in the credit markets, most corporations have sufficient earnings, cash, and revolving credit to pay off their next few years of debt maturities without needing to refinance. They do not need bank financing.

That being said, we do still need to monitor credit standards. They haven’t been as important for this cycle, but if they remain tight for some time, then there may be a point where companies need to borrow. However, if credit standards are still tight, companies might not be able to.

This is the other important thing to remember about credit: it always eventually comes due. When the bills come due, if bank credit is still closed and credit markets are also closed, in 3-5 years time when the current debt being issued starts to mature, the success US corporates had surviving this crisis could be their undoing to create the next crisis.

That’s not something to invest in today, but it reminds us of the importance of monitoring all this data on a consistent basis because like so many things in macro, “it doesn’t matter until it does.”