As Russia-Ukraine tensions continue to rise, we’re starting to feel the effects here in the U.S.

With the price of oil reaching eight-year highs, the world is bracing for high gas prices eating into consumer wallets and corporate income statements.

Today, we are going to go over how to prepare for oil prices and what it means for a potential recession in 2022.

Last week, the U.S. and the U.K. announced another pivotal step in the effort to pressure Russia to halt its war in Ukraine. They announced a ban on imports of Russian oil and Russian-finished petroleum goods.

While Russian oil only makes up 3% of U.S. imports, oil and finished goods are closer to 8%. That’s not a show stopping number, but it’s significant.

Naturally, on the news of the ban, the price of oil rocketed higher. Levels were already flirting with $120 a barrel and remained volatile. This translates to the highest national gas prices on record, surpassing $4.30 per gallon.

It’s clear we’re already feeling the effects, and investors recognize not having imports from Russia will only create more scarcity and uncertainty in a time when OPEC is already uninterested in acting as the stopgap it has historically.

When new data comes in, it is important to listen.

Famous technology forecaster and consultant Paul Saffo says you should always approach a forecast with “strong opinions, weakly held.” In other words, while it’s impossible to publish a forecast without a position or opinion, investors also don’t want to be so wedded to their firm-held views, even when the data says otherwise.

Since the coronavirus pandemic first struck, we have been very bullish on the U.S. market. Strong fundamentals, manageable rate hikes, and bullish catalysts that signal management teams may be getting ready to invest more are reasons we have seen massive upside for the market. All these have remained and accelerated in late 2021 and into 2022, giving us even more reason to bang the drum.

While we are still very bullish for 2022, the recent news around oil is something we are watching closely, as it’s the first thing we’ve seen that could upset our outlook for the market.

As we talked about right at the beginning of the pandemic, when oil prices spike higher, it can be a catalyst for a recession.

This is due to how it can upset corporate and consumer profits. It’s not in the sense that oil prices by themselves spark a recession. But high prices eat into profits and margins enough to make it difficult for companies and consumers to handle these costs along with their debt servicing.

As the following chart shows, many times we’ve seen a massive spike in oil prices, we’ve also seen a recession, even if for an exceptionally brief amount of time. 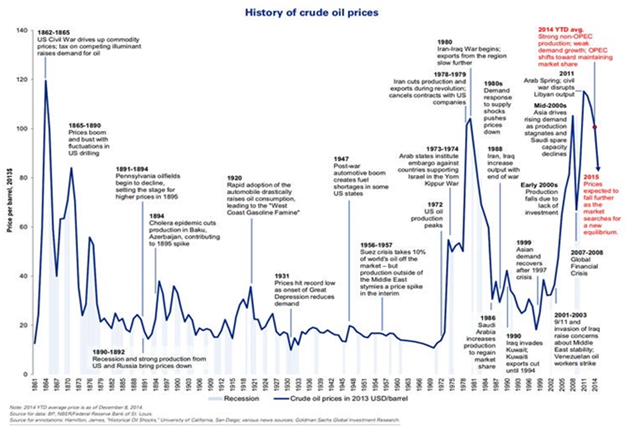 However, there are exceptions to the idea that rising oil prices mean a recession is coming.

In 2011, when oil prices reached exceptionally elevated levels amidst the Libyan civil war, almost doubling from the 2008 lows seen during the global financial crisis, we didn’t have a recession. While we know a recession is not guaranteed, rising prices can slow down growth.

Thanks to a strong credit environment, low risk of defaults, and very healthy consumer and corporate balance sheets, we don’t think that this latest spike in oil prices is likely to be a catalyst for waves of defaults and a recession.

But we think that for the first quarter of 2022, it could cause us to push off some of the acceleration we are expecting for the rest of the year because it will reduce profit margins and consumer spending until things normalize.

So, while we’re not concerned about inflation overall, this “most important commodity” impacts income statements in material ways. Because of that, these oil prices are something we’ll keep watch on.