How Warren Buffett is tackling the markets in 2021

Today, we look at how one of the greatest investors to ever live has performed since the onset of the pandemic.

In his annual letter to his shareholders, Warren Buffett highlighted how low interest rates meant that bond markets were a real risk for the economy, and how his strategy has changed.

Warren Buffett was recently back in the headlines as Berkshire Hathaway’s (BRK.A) annual letter to its shareholders was released in late February.

In this year’s letter, Buffett highlighted how low interest rates meant bond markets were a risk catalyst for the economy. Investors who rely on bond income may become more aggressive, ultimately increasing the risk within their portfolios.

Many investors were worried about the firm’s performance, considering how its wide exposure of holdings maps to the economy at large.

Through the pandemic, Berkshire Hathaway can boast its revenues were only down approximately 3.5% in 2020.

Considering the number of investors and market participants who idolize and listen to Buffett, we thought it would be relevant in the current market conditions to take an updated look at Berkshire Hathaway’s portfolio.

This is not the first time we have analyzed Buffett’s portfolio. Our previous article on Berkshire Hathaway can be found here.

Back then, we talked about how investors stuck using GAAP metrics would never be able to spot attractive stock opportunities. Buffett himself says the GAAP earnings don’t represent what is happening in the business.

On Wednesday, March 17th at 7:00pm ET, we are hosting a webinar to discuss how GAAP metrics are still misleading investors, and how to invest going into 2021. If you’re interested in joining us for The Fall of Wall Street: High Alpha in the K-Shaped Recovery, you can register here.

Today, we have updated our analysis through Uniform Accounting to break down the current holdings in the portfolio.

Steinman just had one condition, his fiancée, who was apparently not a very talented singer or actress, had to be the lead.

Warren Buffett summarized Graham’s teachings with this one comment:

After leaving Columbia, Buffett took several stops through the world of finance, including working for Ben Graham’s investment partnership. Then Buffett gained control of Berkshire Hathaway.

One thing is for sure…he is not relying on the as-reported GAAP earnings numbers to conduct his analysis.

Buffett is not alone in recognizing that as-reported earnings numbers and other financial statement data are terribly problematic and misleading. He is certainly one of the more outspoken on the issue.

That’s why Uniform Accounting and Uniform Financial Analytics are so powerful. Financial data that reflect the real economic performance and valuation of firms are necessary for great value investing. They unlock and reveal insights about the world of companies that arcane accounting – the existing accounting – hides and misleads.

We’ve conducted a portfolio audit of Berkshire’s top holdings, based on its most recent 13-F, to see Buffett’s investments in 2021. 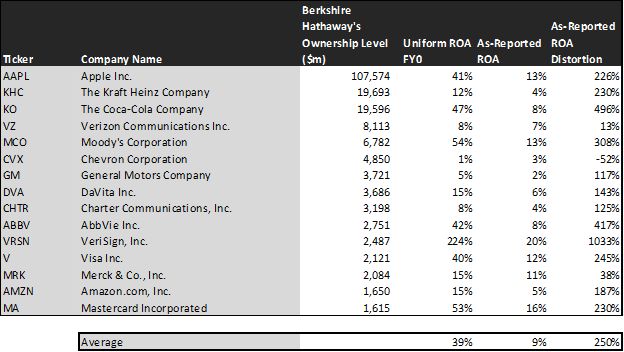 On an as-reported basis, many of these companies are poor performers with returns at 10% or below, with the average as-reported return on assets (ROA) right around 9%.

In reality, the average company in the index displays an impressive average Uniform ROA of 39%.

Once we make Uniform Accounting (UAFRS) adjustments to accurately calculate earnings power, we can see the underlying strength of the portfolio.

Once the distortions from as-reported accounting are removed, we can see VeriSign (VRSN) does not have a return of 20%, but a sizable ROA of 224%.

Similarly, Mastercard’s (MA) ROA is really 53%, not at 16%. While as-reported metrics are portraying the company as a slightly above-average business, Uniform Accounting shows the company’s truly robust profitability.

The list goes on from there, for names ranging from Moody’s (MCO) and Visa (V), to AbbVie (ABBV) and Coca-Cola (KO). 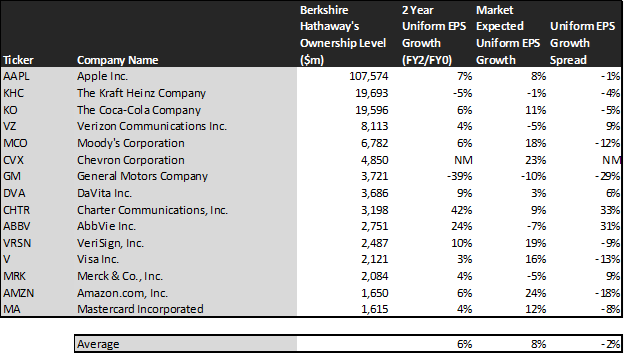 The average company in the U.S. is forecast to have 5% annual Uniform Accounting earnings growth over the next 2 years. In comparison, these top stocks are forecasted by analysts for 6% Uniform earnings growth.

On average, the market is pricing these companies to grow earnings by 8% a year. Analyst’s are forecasting higher expectations, which may mean the market is leaving some upside on the table.

AbbVie (ABBV) is another example. While analysts forecast AbbVie to grow by 24% over the next two years, the market expects the firm to see a 7% shrinkage over the same period.

That being said, there are many companies forecast to have earnings growth less than market expectations. For these companies, like Visa (V), Amazon (AMZN), and Mastercard (MA), the market has growth expectations in excess of analysts’ predictions.

Ultimately, once we make uniform accounting adjustments, we can see that Berkshire is investing in high quality businesses, forecasted to grow in excess of market expectations.

As our Uniform Accounting tearsheet for Apple Inc. (AAPL:USA) highlights its Uniform P/E trades at 24.1x, which is around the corporate average valuation of 25.2x, but above its own historical valuation of 19.7x.

Average P/Es require average EPS growth to sustain them. In the case of Apple, the company has recently shown a 10% Uniform EPS growth.

We take Wall Street forecasts for GAAP earnings and convert them to Uniform earnings forecasts. When we do this, Apple’s Wall Street analyst-driven forecasts are 35% EPS growth in 2021, followed by a 1% EPS shrinkage in 2022.

Based on current stock market valuations, we can back into the required earnings growth rate that would justify Apple’s $121 stock price. These are often referred to as market embedded expectations.

Apple is currently being valued as if Uniform earnings were to grow 9% annually over the next three years. What Wall Street analysts expect for Apple’s earnings growth is above what the current stock market valuation requires in 2021, but below that requirement in 2022.

Furthermore, the company’s earning power is 7x the corporate average. Also, cash flows and cash on hand are more than thrice its total obligations—including debt maturities, capex maintenance, and dividends. Together, this signals a low credit and dividend risk.

To conclude, Apple’s Uniform earnings growth is above its peer averages, and their valuations are also traded above its average peers.