One of the greatest fund managers ever lost investors more than he ever made them, but his pupil’s portfolio is positioned to make money

In October, we looked at one of the greatest hedge fund managers of all time who helped create the hedge fund industry.

This investment great is most famous for two things: having to shut down his hedge fund at the worst time for him to have to give in to the market, and also for helping foster a group of managers that have generated impressive returns since becoming his “cubs.”

Below is the story we told about him in October, including an updated portfolio analysis for one of his most successful pupils, based on his fund’s latest 13-F.

In March 2000, Julian Robertson made the decision to return all Tiger Management’s investors’ money and shut down the hedge fund.

One of Tiger’s funds, the Jaguar Fund, had dropped 14% in the first 2 months of the year, having lost almost 18% since late 1998. After a $2 billion loss on a bad bet in the Japanese yen in 1998, Tiger had steadily seen investors leaving, and had taken on losses, seeing the firm’s AUM drop from $20 billion in 1998 to $6.5 billion at the time Robertson decided to close the doors.

Robertson and Tiger had been one of the early stars of the hedge fund world. He took $8 million in capital in 1980 and turned it into over $20 billion by the fund’s 1998 peak.

But Robertson was too early to the party of shorting internet stocks. His dogmatic value based philosophy on investing led him to be long old-economy companies in the late 1990s, in the face of a rampant growth-focused bull market.

It meant that when he reached his peak in AUM, it was just when he started losing money. And because of that timing, many have said he actually lost more money for investors than he ever made them in the prior 18 years.

Ironically, March 2000, when Tiger threw in the towel, was the market peak, and Robertson ended up being proven right.

He made plenty of money after 2000, as he remained short the internet bubble with his own money, but his investors never got to participate.

He had built an all-star team at Tiger. They matured under him, absorbing his deep fundamental research perspective.

Importantly, with his help, they also learned his mistakes in the dot.com bubble, and understood the importance of timing their investments to avoid being right too soon as Robertson had been.

In the aftermath of the dot.com bubble, Robertson sponsored several of his former employees in setting up their own hedge funds.

He would provide them with initial capital for a stake in their fund. He would continue to mentor them. And he would help them create a network of Tiger Cubs, that would share ideas and research, much like they had inside of Tiger Management, to maximize returns.

These great investors include brand names like Samlyn, Maverick, Lone Pine, HealthCor, and Coatue. Hedge funds that are amongst the most respected investors today.

However, most would agree the most successful and largest of the tiger cubs is Chase Coleman and his firm, Tiger Global.

Coleman and Tiger Global follow Robertson’s fundamental research-driven footsteps. Their strategy is not as simple as focusing just on value companies, like Klarman at Baupost, or growth companies, like Driehaus.

Their goal is to find great thematic ideas that are mispriced by the market, which can run the gamut of deep value, value, GARP, and growth names, depending on the market context.

When looking at Tiger Global’s holdings, anyone using as-reported accounting metrics would likely be scratching their heads. Coleman and his firm are focused on the true fundamentals of companies when they are looking for mispriced firms.

Using traditional as-reported accounting metrics, the fundamentals and KPIs for businesses don’t line up with the accounting. It is only once those holdings are looked at with a lens that better represents economic reality, and lines up with the KPIs and real fundamentals, that their investments become apparent.

To show what we mean, we’ve done a high level portfolio audit of Tiger Global’s top holdings, based on their most recent 13-F. This is a very light version of the custom portfolio audit we do for our institutional clients when we analyze their portfolios for torpedos and companies they may want to “lean in” on. 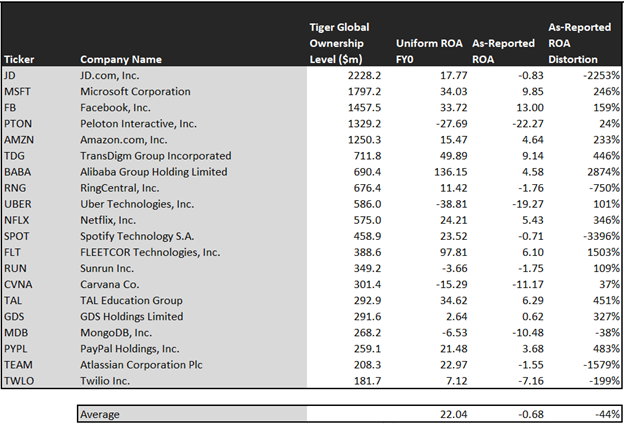 Using as-reported accounting, investors would think Coleman and Tiger Global weren’t picking particularly compelling themes, given that the companies exposed to those themes barely had positive return on assets (ROA) on average.

On an as-reported basis, many of these companies are poor performers with returns below 5%, and the average as-reported return on assets (ROA) is right at -1%.

In reality, the average company in the portfolio displays an impressive average Uniform ROA at 22%—that’s above corporate average returns currently. These are the kind of companies that likely have fundamental and thematic tailwinds.

Once the distortions from as-reported accounting are removed, we can realize that Microsoft (MSFT) doesn’t have an 10% ROA, it is actually at 34%. Microsoft is a cash generating machine that has earned its $1 trillion valuation.

RingCentral (RNG) is another great example of as-reported metrics mis-representing the company’s profitability.

RingCentral’s ROA isn’t negative 2%, it is actually positive at 11%. Tiger Global appears to understand that market expectations for the company, thinking it’s a negative return business, are completely incorrect.

The list goes on from there, for names ranging from Spotify (SPOT) and FleetCor (FLT), to TAL Education (TAL), PayPal (PYPL), and Atlassian (TEAM).

If Tiger Global were focused on as-reported metrics, it would never pick most of these companies because they look like anything like the thematically-powered companies with fundamental tailwinds that are the fund group’s mandate. 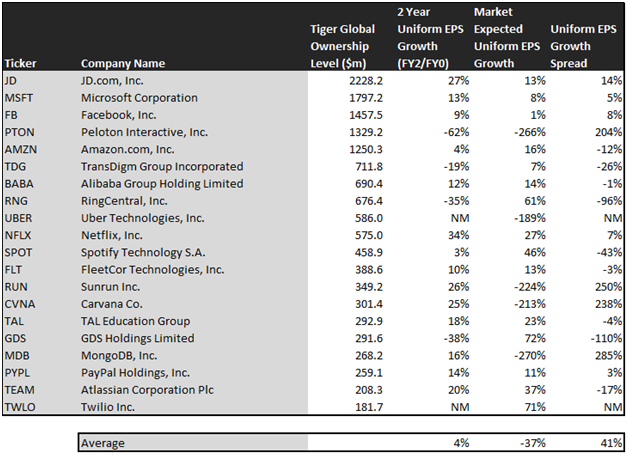 Tiger Global is not just finding high quality companies with significant thematic-driven growth opportunities though, it is finding mispriced companies.

One example of a company in the Tiger Global portfolio that has growth potential that the market is mispricing is JD.com (JD), Tiger Global’s largest holding. JD.com’s Wall Street analyst forecasts have 27% Uniform earnings growth built in, but the market is only pricing the company to have earnings grow by 13% each year for the next two years.

Another company with similar dislocations is Facebook (FB). The market is expectating only 1% growth in earnings. However, the company is actually forecast for Uniform EPS to grow by 9% a year.

Yet another is the fund’s largest holding, Netflix (NFLX), is priced for a 27% growth in Uniform earnings, when the company is forecast to grow by earnings by 34% a year.

That being said, there are a few companies we’d recommend Tiger Global look at again before holding. Either the rest of the market has not caught up with the themes Tiger Global is watching yet, or Tiger has misjudged these companies’ growth.

Transdigm (TDG) is forecast to see Uniform earnings shrink by 19% a year going forward. However, the market is pricing the company for 7% annual earnings growth.

But many of Tiger Global’s holdings clearly look like the type of thematically fueled companies with growth tailwinds that have upside potential. It wouldn’t be clear under GAAP, but unsurprisingly Uniform Accounting sees the same signals that Tiger Global appears to.

As the Uniform Accounting tearsheet for JD.com, Inc. (JD:USA) highlights, JD trades at a Uniform P/E of 22.5x, around the corporate average valuation levels, but below its own recent history.

Average P/Es require average EPS growth to sustain them. In the case of JD, the company recently had a 20% Uniform EPS growth.

As such, we use Wall Street GAAP earnings estimates as a starting point for our Uniform earnings forecasts. When we do this, we can see that JD.com is forecast to see robust Uniform EPS of 85% in 2019 followed by 12% shrinkage in 2020.

Based on current stock market valuations, we can back into the required earnings growth rate that would justify $42 per share. These are often referred to as market embedded expectations.

In order to meet the current market valuation levels of JD.com, the company would have to grow Uniform EPS by 13% each year over the next three years.

The company’s earning power, based on its Uniform return on assets calculation, is 3x corporate average returns. Furthermore, with cash flows and cash on hand consistently exceeding debt obligations, JD has low credit and dividend risk.

To conclude, JD’s Uniform earnings growth and valuation are both trading above peer averages.