Today, we’re going to talk about one of the most famous ‘bears’ on Wall Street who was able to make millions during the Great Depression.

His strategy still applies, and we’re going to show you how to use it to protect your portfolio.

Last Monday, we explained the history of the terms ‘bull’ and ‘bear’ and why they are still used in finance today.

While most investors try to make their money by riding bull markets and watching their investments appreciate in value, some investors have chosen a different approach.

Over the last hundred or so years, there have been several notable examples of investors who focus most of their time on bear markets.

A few modern examples include Marc Faber, who publishes a newsletter called the Gloom Boom & Doom Report and was able to warn his clients about Black Monday; and NYU Stern professor Nouriel Roubini, who has earned the nicknames “Dr. Doom” and “permabear” (permanent bear) for his pessimistic market outlooks.

Roubini was outspoken leading up to the Great Recession about the deterioration of the housing market and has continued focusing on market risks and downside.

However, only one person earned the name “The Great Bear of Wall Street” because of his massive short positions during the Great Depression that generated nearly $100 million (over $1 billion in today’s dollars) in profits.

This is the same person who is considered to be one of the greatest stock traders of all time, as well as a pioneer of day trading. He was so famous that one of today’s greatest traders wrote a forward to his book when it was re-released.

His name was Jesse Livermore, and his legacy shaped how we monitor the economy today.

In many ways, Livermore was ahead of his time. He understood some of the principles of investing that many investors today still fail to consider.

Livermore had one of his first big wins during the market panic of 1907 when he correctly identified a lack of liquid capital in the market.

He made his first $1 million during the market crash, but that was far from his last trick. In 1929, Livermore again shorted the market for the same reasons, earning him approximately $100 million.

He has a quote that summarizes this nicely: “There is nothing new on Wall Street. There can’t be… because whatever happens in the stock market today has happened before and will happen again.”

This is a powerful quote, especially in the context of his career.

Livermore’s big calls in 1907 and 1929 were driven by several factors, but the most important one was his focus on credit data.

Livermore understood the market and economy is cyclical, and there are signals to indicate where we are within the cycle.

Because Livermore understood that the connection between credit cycles, economic growth, and that the stock market, he was able to identify when a crash was coming before anybody else.

After moving to New York and making a name for himself among many Wall Street figures, Livermore was able to call just about any bank in Manhattan for a loan.

He would carefully analyze the answers he received—if the banks were willing to give him a loan with little hesitation, that was a sign that markets were operating normally.

Sometimes, the banks would ask him to put up some collateral in exchange for a loan. While that was not inherently concerning, it signaled to Jesse that he had to proceed with caution and monitor the situation closely.

From time to time, he would start receiving truly concerning signals from his “bank survey.” The banks would either turn down his request or require that he put up nearly the entire loan amount as collateral.

This signaled to Livermore that banks were not willing to lend anymore, a surefire signal that trouble was brewing for the economy…and equity markets.

This was when he would make his move.

It’s not feasible for investors to conduct the same level of research today—there are far too many banks with more important things to do.

That said, there is a tool developed by the Fed that emulates Livermore’s bank survey—The Senior Loan Officer Opinion Survey (SLOOS).

The results of the survey are a good proxy for changes in credit availability and can help monitor the impact credit may have on equity markets. The chart below highlights quarterly SLOOS results compared to the S&P 500 since 1990. 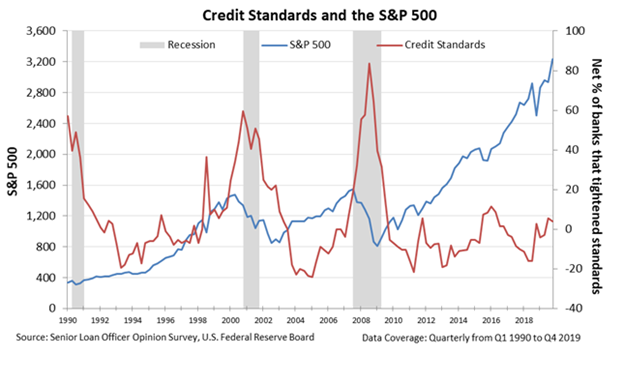 There is a strong relationship between high levels of tightening and a stock market recession.

Each of the three recessions covered in the chart were preceded by more than 50% of reporting banks tightening their credit standards.

Looking at the most recent results, we can see that credit standards tightened slightly in Q4 2019 but standards remain very loose. The current market environment is much like the second of Livermore’s expected environments “credit is easy but you need to post some collateral.”

When it becomes tough to find access to credit at all is when we need to be concerned. Clearly, we’re far from that issue right now. This is yet another reason why we remain positive for the coming quarters.

Investors may be panicking about COVID-19, but if it doesn’t really impact companies and individuals accessing the credit market…its impact is not going to be lasting.

It’s amazing how applicable a nearly 100-year old quote still is. While we are still seeing the ‘all-clear’ signal for now, Livermore’s wisdom would be to continue monitoring SLOOS in each quarter going forward.