This fund has put up impressive returns by being in strong disagreement with Buffett, Uniform Accounting shows what to expect going forward

Value investing has not been in vogue for some time, and this fund has benefited by deprioritizing value in its investment process.

But that doesn’t mean its team has completely forsaken all the valuable insights Warren Buffett’s investing philosophy can offer. The firm has just stated it wants to selectively apply some of Warren’s rules, while saying it strongly avoids others.

Using as-reported numbers though, it appears the firm is ignoring all Buffett’s rules. In reality, UAFRS-based financial metrics help make sense of the stocks the fund is buying, and how they line up perfectly.

Berkshire Hathaway’s returns, both how strong they are and for how long, certainly warrant that title.

Some though have been wondering if his lack of action during the pandemic-driven panic in the market is a sign he is starting to “lose his fastball.”

Those arm-chair quarterbacks wonder if he’s become less open to the opportunities in the market, and how the market works today.

There are some parts of Buffett’s philosophy that these investors think are solid core parts of the right kind of investment approach.

His focus on buying high-return businesses with strong economic moats means high visibility for cash flows. Similarly, his focus on quality management teams can give investors confidence that they aren’t investing in a melting ice cube where management mis-steps could disrupt a cash cow.

But these investors appear to question his focus on value, or as Ben Graham and Seth Klarman would say, his focus on “margin of safety,” when making investments.

Quantitative investors have been highlighting how value is “broken” right now too. Quant research greats like Cliff Asness aren’t saying value is dead, but that it is not a factor the market is paying attention to right now.

In an environment like this, it is no wonder a company that de-prioritizes value would have been a big winner the last few years.

Akre Capital Management is a top 3 hedge fund in terms of 3 year performance according to TipRanks.

The team has built this performance on a strong belief in Buffett’s focus on quality companies and management teams. But the “three-legged stool” of the key characteristics the team focuses on differs from Buffett on the third.

Akre cares about finding high-return firms with economic moats, strong management teams and culture they can trust to continue to create value, and the ability for these companies to compound growth over long periods of time.

Buffett also pays attention to companies with growth opportunities, but it is a distant focus relative to finding value. For Akre, growth is far more important than the value you’ll be paying for that growth.

Looking at Akre’s portfolio though, it’s not obvious that the fund invests in either high quality companies or growth opportunities using as-reported metrics.

We’ve conducted a portfolio audit of Akre’s top holdings, based on its most recent 13-F.

Unsurprisingly, while as-reported metrics of Akre’s investments make it look like Akre doesn’t care at all about quality, in reality these investments appear to be higher quality names, once Uniform Accounting metrics are reviewed.

It’s clear that when Akre is making its investment decisions, the team is making decisions based on the real data. 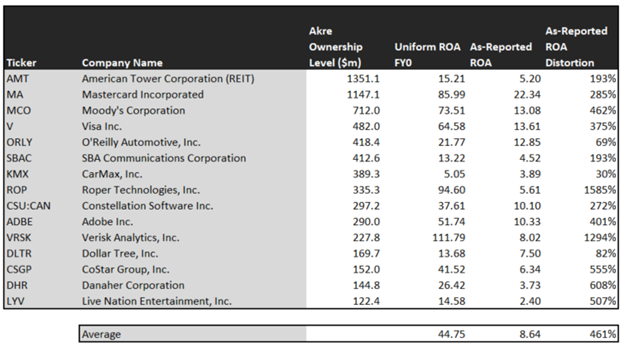 Using as-reported accounting, investors would think Akre was buying anything other than the “forever” businesses like they talk about.

On an as-reported basis, many of these companies are poor performers with returns below 6%, and the average as-reported return on assets (ROA) is right at 9%.

In reality, the average company in the portfolio displays an impressive average Uniform ROA at 45%.

Once we make Uniform Accounting (UAFRS) adjustments to accurately calculate earning power, we can see these are the kind of high return compounders that Akre would be expected to invest in.

Once the distortions from as-reported accounting are removed, we can realize that American Tower (AMT) doesn’t have a 5% ROA, it is actually at 15%.

Verisk doesn’t have an 8% ROA, it is actually at 112%. Akre appears to understand that market expectations for the company, thinking it’s a weak business, is completely incorrect.

The list goes on from there, for names ranging from Moody’s (MCO) and Visa (V), to SBA Communications (SBAC), Constellation Software (TSX:CSU), and Live Nation (LYV).

If Akre were focused on as-reported metrics, it would never pick most of these companies because they look like anything but companies with strong economic moats, sound operations, and significant growth opportunities.

But it appears that Akre is making a broader bet than just on high-quality firms. It has put a stake in the ground, saying that quality and growth matter, but that valuation doesn’t. 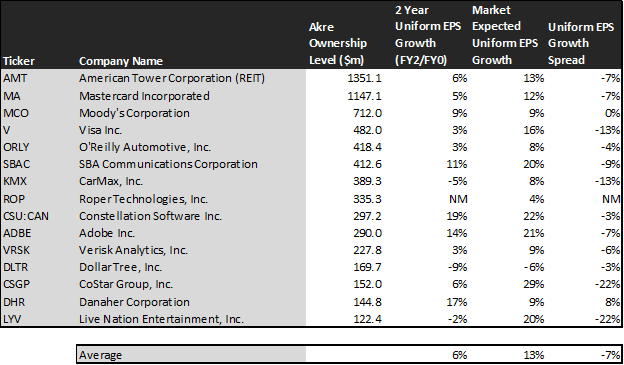 The average company in the US is forecast to have 5% annual Uniform Accounting earnings growth over the next 2 years. Akre’s holdings are forecast by analysts to grow slightly more than that, growing at 6% a year the next 2 years, on average.

But Akre appears to be betting the market knows more than analysts, and is expecting stronger fundamental tailwinds going forward. And it is willing to pay up for this higher expected growth.

This appears irrational initially, but it may be exactly in line with Akre’s three part process of focusing on high quality companies with strong management teams and growth compounding opportunities.

One example of a company in the Akre portfolio that the team is expecting to have stronger growth than analysts are forecasting is Visa (V). Visa’s Wall Street analyst forecasts have 3% Uniform earnings growth built in, but the market is pricing the company to have earnings grow by 13% each year for the next two years. Akre is expecting management can deliver that above trend growth, and that’s what they’re investing in.

Another company with similar dislocations is CarMax (KMX). The company is forecast for Uniform EPS to shrink by 5% a year. But Akre and the market are expecting the company management team can deliver growth of 8% a year.

Yet another is Adobe (ADBE), priced for 21% growth in Uniform earnings, when the company is forecast to grow by earnings by 14% a year.

There’s really only one company in the fund’s top holdings that would be defined as traditionally “undervalued” and that is Danaher (DHR). Danaher is forecast to see Uniform earnings grow by 17% a year going forward. However, the market is pricing the company for only 9% annual earnings growth.

But even Danaher isn’t a “value” stock, as it’s trading at a 33x Uniform P/E. The company’s growth is being undervalued, but the market is still paying a premium for this name.

Overall, it is clear Akre is all in on quality growth, and throwing valuation cares to the wind. It wouldn’t be clear under GAAP, but unsurprisingly Uniform Accounting sees the same signals that Akre says it is investing in.

High P/Es require high EPS growth to sustain them. In the case of American Tower, the company recently had a 15% Uniform EPS growth in 2018.

As such, we use Wall Street GAAP earnings estimates as a starting point for our Uniform earnings forecasts. When we do this, we can see that American Tower is forecast to see Uniform EPS growth of 4% in 2019, followed by 8% EPS growth in 2020.

Based on current stock market valuations, we can back into the required earnings growth rate that would justify $242 per share. These are often referred to as market embedded expectations.

In order to meet the current market valuation levels of American Tower, the company would have to grow Uniform EPS by 13% each year over the next three years.

What Wall Street analysts expect for American Tower’s earnings growth is below what the current stock market valuation requires.

Furthermore, based on Uniform return on assets calculation, the company’s earning power is at 15%, which is 3x the corporate average. However, with cash flows and cash on hand that are below total debt obligations, American Tower has high credit and dividend risk.

To conclude, American Tower’s Uniform earnings growth is above peer averages but is currently trading in line with peer averages.