This Viking has had to follow his ancestor’s footsteps, exploring new types of investments, Uniform Accounting shows he hasn’t lost his way

Much like his ancestors, this investing great has had to explore new investment landscapes to try to provide for his investors like he did previously.

He’s still keeping the investment strategy that he learned from his mentor, another investing great, but he’s applying it to his normal investments and an entire new group of opportunities to generate strong returns.

GAAP as-reported metrics make it appear that he’s lost his way during this shift.

In reality, UAFRS-based financial metrics help make sense of the stocks he is buying, and how they line up perfectly with his strategy.

But the history of the Scanadinavian seafarers goes much further back.

While the Western Europeans viewed this as a new terror sent from God to punish them for, the reality is the Vikings had been trading and raiding across Russia and Eastern Europe, travelling all the way to Constantinople, for some time.

The farmers and fisherman from Denmark, and modern Norway and Sweden had a long-run relationship with both the sea and farming.

The Vikings weren’t just raiding for the sake of raiding. They had to to continue to provide for their people like they’d done historically.

He left Tiger in 1999 before the fund closed down, starting Viking Global, which grew at one point to over $30 billion in assets under management. However, like all the TIger Cubs, he has remained part of the network of Cubs that all share ideas and strategies, and themes for investing.

And one of the key trends that Halvorsen and the other Cubs focused heavily in during the second half of the 2010s was the growing importance of venture capital, and how many high flying companies were waiting to enter public equity markets until the real gains had been made.

That being said, the vast majority of Viking’s portfolio, over $20 billion, remains in public equity investments, focused on the same kind of companies that Viking has always focused on, undervalued companies with strong fundamental and macro tailwinds.

Analyzing Viking’s portfolio, it’s not obvious that the fund invests in either high quality undervalued names or companies with strong macro tailwinds when using as-reported metrics.

Unsurprisingly, while Viking’s investments’ as-reported metrics make it look like Viking has lost its way, in reality they appear to be higher quality names, once Uniform Accounting metrics are reviewed. 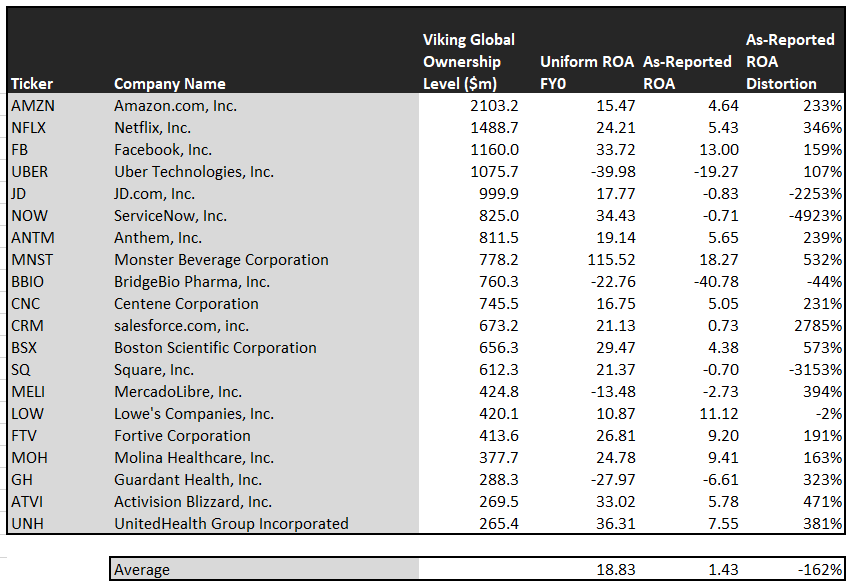 On an as-reported basis, many of these companies are poor performers with returns below 6%, and the average as-reported return on assets (ROA) at 1%.

In reality, the average company in the portfolio displays an impressive average Uniform ROA at 19%. That’s above corporate average returns currently.

Once the distortions from as-reported accounting are removed, we can realize that Amazon (AMZN) doesn’t have a 5% ROA, it is actually at 15%. Amazon, Viking’s largest investment, is a strongly profitable innovator.

Facebook doesn’t have a 13% ROA, it is actually at 34%. Viking appears to understand that market expectations for the company, thinking it’s a low return business, is completely incorrect.

The list goes on from there, for names ranging from JD.com (JD) and ServiceNow (NOW), to Monster Beverage (MNST), salesforce.com (CRM), and Square (SQ). 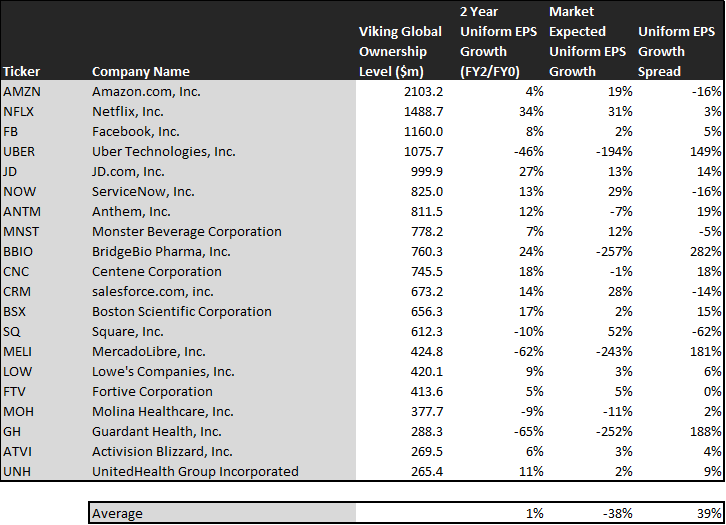 Viking is not just finding high quality companies with strong tailwinds though, it is finding mispriced companies.

One example of a company in the Viking portfolio that has growth potential that the market is mispricing is JD.com (JD). JD.com’s Wall Street analyst forecasts have 27% Uniform earnings growth built in, but the market is pricing the company to have earnings grow by 13% each year for the next two years.

Another company with similar dislocations is Anthem (ANTM). Expectations are low, for 7% shrinkage in earnings. However the company is actually forecast for Uniform EPS to grow by 12% a year. While expectations are low, if it can deliver any growth at all, there’s significant upside.

Yet another is the fund’s largest holding, Centene (CNC), is priced for a 1% shrinkage in Uniform earnings, when the company is forecast to grow by earnings by 18% a year.

ServiceNow (NOW) is forecast to see Uniform earnings grow by 13% a year going forward. However, the market is pricing the company for 29% annual earnings growth.

As our Uniform Accounting tearsheet for Amazon.com, Inc. (AMZN:USA) highlights Amazon’s Uniform P/E trades at 44.6x, which is above the corporate average valuation levels and its own recent history.

High P/Es require high EPS growth to sustain them. In the case of Amazon, the company recently had a 15% Uniform EPS growth in 2019.

As such, we use Wall Street GAAP earnings estimates as a starting point for our Uniform earnings forecasts. When we do this, we can see that Amazon is forecast to see Uniform EPS shrinkage of 7% in 2020, followed by 16% growth in 2021.

Based on current stock market valuations, we can back into the required earnings growth rate that would justify $2,410 per share. These are often referred to as market embedded expectations.

In order to meet the current market valuation levels of Amazon, the company would have to grow Uniform EPS by 20% each year over the next three years.

What Wall Street analysts expect for Amazon’s earnings growth is below what the current stock market valuation requires.

The company’s earning power, based on its Uniform return on assets calculation, is at 15%, which is 3x the corporate average. Furthermore, with cash flows and cash on hand consistently exceeding debt obligations, Amazon has low credit and dividend risk.

To conclude, Amazon’s Uniform earnings growth is near peer averages. However, the company is currently trading above peer averages.