In one corner of the investment world, FX traders look to make billions by buying and selling sovereign currency on the back of changing global circumstances.

Times of great upheaval or drama provide for the largest swings, which is why 2020 saw a huge boom of FX traders playing the market. Many traders were betting on one specific trade with Goldman Sachs.

Today, we will analyze what these traders all went wrong, and what this means for the economy as a whole.

In the foreign exchange (FX) markets, traders skilled at guessing wide-sweeping economic trends look to trade sovereign nation’s currencies against each other.

Similar to the commodities markets, the FX market is often made up of companies or large traders on one side looking to hedge risk, and speculators on the other side on the hunt for profit.

The most famous example of a trader winning in the FX market is when George Soros “broke” the Bank of England. When the highly inflationary pound was pegged to the Deutschmark, Soros recognized the unsustainability of this arrangement and began to aggressively short the currency.

When the U.K. was unable to maintain the relationship of the pound to the Deutsche Mark and left the European exchange rate agreement, traders were able to make a killing. Soros himself made over $1 billion from his position.

With the pandemic creating unique currency flow trends, traders have been hoping for an opportunity to follow in Soros’ footsteps.

In this vein, Goldman Sachs recommended shorting the U.S. dollar six months ago expecting it to have a similar bout of volatility.

However, Goldman was unable to replicate the success of Soros in the ‘90s.

After a fruitless six months, Goldman Sachs is beating a hasty retreat on its bearish position on the greenback.

The trade was a pair trade, selling the dollar against a basket of 10 commodity currencies. Similar to other currency trades, Goldman was looking to take advantage of a perceived economic weakness.

The thought was the dollar has historically been a safe currency, anchored by sound monetary policy and the hyperpower status of the U.S. However, six months ago, with rounds of large stimulus bills and the world economy accelerating, people would no longer need to flee to the safety of the dollar, and the greenback would underperform.

This thesis never came to pass. The Bloomberg Dollar Spot Index has risen by more than 2% this year and longer-dated Treasury yields have surged.

The big reason for the rally is in the past few months, it appears the world’s recovery is splitting in two.

Thanks to large government spending and investment into vaccine distribution, the United States is seeing a strong recovery brewing in 2021. Recent job reports and the healthy treasury rate changes all point to a strong recovery.

Meanwhile, developing countries are seeing a much slower recovery process, with some countries not expecting to be 75% vaccinated for years.

Much of Europe also is seeing a much more stop-and-go recovery, potentially falling behind the U.S.

Signs of a bifurcated recovery are pointing to the U.S., and in particular the U.S. consumer, once again taking the lead in global growth for the short-term. Stronger economic growth and higher interest rates mean a stronger dollar.

The potential for stronger growth in the U.S. sets in motion a wide slew of economic consequences which may directly impact your portfolio.

Last week, we talked about how the economy reopening may cause inflation to spike in the short-term. With more money chasing the same or even fewer goods, prices may increase across the economy.

The second reason is after the understanding of stagflation in the ‘70s, the Fed is now mindful of effectively controlling inflation. By adjusting the Federal Funds Rate in response to the economy heating up, the Fed is able to control lending and reel in inflationary activity.

With the rise of the dollar, and the expectation the U.S. economy could be heating up, the odds are steadily climbing that the Fed will start raising rates to combat inflation before it becomes a problem.

However, in the past two months, the picture is starting to change. Now, there is a 9% chance the Fed could raise rates come June, and almost a 15% chance they could raise them by the end of the year. 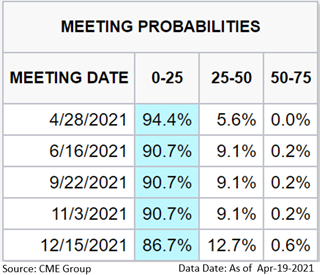 The odds still clearly tilt to interest rates remaining at rock bottom levels, as the U.S. is still not out of the woods of the pandemic yet. However, monitoring what the Fed is planning to do is instructive for understanding future growth and treasury yields.

Clearly, this metric is trending in the direction that interest rates will rise sooner than many expected. Many might tell you that should be cause for alarm. After all, higher interest rates directly impact the discount rate and valuations.

But no matter what CNBC or other pundits will tell you, this is actually bullish for the economy.

Higher rates mean the Fed and the markets think the economy is growing strongly and picking up steam. They are raising rates to help moderate economic activity.

When it raises rates, the Fed is telling you to expect strong economic growth, which leads directly to earnings growth for companies on the S&P 500 and more.

While uncontrolled rate hikes can constrict economic growth, the Fed starting to raise rates is an exceptionally bullish signal. And with such a low rate today, any rate hikes in 2021 won’t stop any recovery, highlighting just how much faster the US economy is accelerating than anyone expected.