At 99% index stocks and 1% time deposits, this UITF has been underperforming its benchmark…also, ICT tearsheet

This unit investment trust fund (UITF) from the country’s first universal bank has underperformed its benchmark, the Philippine Stock Exchange Composite Index (PSEi). However, the average Uniform ROA for its holdings is double the as-reported ROA, implying potential upside.

That said, as-reported metrics would leave investors confused as to why the fund would choose to track the index when the stocks in the index appear to have minimal profitability. Uniform Accounting financial metrics help make sense of the fund’s investments.

In addition to examining the fund’s portfolio, we are including fundamental analysis of one of the fund’s largest holdings, providing you with the current Uniform Accounting Performance and Valuation Tearsheet for that company.

Philippine National Bank or PNB started its operations in 1916 as a government owned-institution. It was the first Philippine universal bank and operated as the country’s central bank until 1949. The bank was later privatized in 1989 and remains one of the largest banks in the country.

PNB offers an array of investment products such as money market funds, bond funds, balanced funds, and equity funds to cater to the varying risk profiles of their clients.

Among those funds, we’ve previously analyzed the PNB Equity Fund and the PNB High Dividend Fund. This week, we’ll be focusing on one of their other funds, the PNB Phil-Index Tracker Fund.

The PNB Phil-Index Tracker Fund was launched on September 8, 2010 and invests in the stocks that make up the PSEi, its benchmark.

The fund uses the index weighting to track or mimic the PSEi’s performance, and generate medium-term capital appreciation while minimizing losses without taking additional risks. 99% of the fund is invested in index stocks while 1% is invested in PNB’s own time deposit. 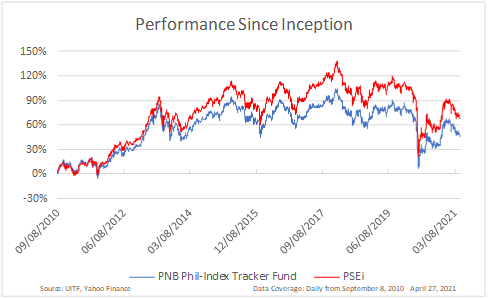 The PNB Phil-Index Tracker Fund started with a net asset value per unit (NAVPU) of PHP 1.00 at its inception in September 2010. By August 2011, the NAVPU had increased to PHP 1.20. During this period, the fund’s 20% gain slightly underperformed the PSEi’s 22% gain.

From this high, the fund’s NAVPU declined to PHP 1.07 in October 2011 driven by the global market selloff in equities following the European debt crisis. During this period, the fund recorded a loss of 11%, still underperforming the PSEi’s loss of 8%.

From this peak, the fund’s NAVPU declined by 24% to PHP 1.41 in December 2013, slightly underperforming the PSEi’s 22% loss over the same period. This decline can be attributed to the aftermath of the Bohol earthquake in October and Typhoon Haiyan in November.

In March 2020, the fund’s NAVPU dropped to PHP 1.06, due to the pandemic-induced market selloff. This 48% loss slightly outperformed its benchmark’s reported loss of 49%.

Since inception, the PNB Phil-Index Tracker Fund’s cumulative 46% gain has drastically underperformed its benchmark’s gain of 67%.

Looking at PNB Phil-Index Tracker Fund’s investments using as-reported metrics, it is not apparent that the PSEi is composed of stable and established companies.

As-reported metrics would have investors believe that the PSEi is composed of companies that do not generate economic profit. However, Uniform Accounting reveals the truth behind these companies.

The table below shows the top 8 core non-financial holdings of the PNB Phil-Index Tracker Fund along with its Uniform return on assets (ROA), as-reported ROA, and ROA distortion—the difference between Uniform and as-reported ROA.

Most of the companies in the PNB Phil-Index Tracker Fund show as-reported ROAs at or above cost-of-capital levels, suggesting that they are generating economic profit. The fund is generating an average as-reported ROA of 3%, lower than the global corporate average returns of 6%.

However, on a Uniform Accounting basis, this UITF’s holdings have actually delivered stronger earnings with an average Uniform ROA of 6%, 2x the as-reported average. These companies have strong returns, with some of the companies having Uniform ROAs greater than global average returns.

As such, it should not be surprising that when analyzing the non-financial holdings of the PNB Phil-Index Tracker Fund, the figures that easily stand out are the large discrepancies between Uniform ROA and as-reported ROA for these companies.

While at a glance, the difference between as-reported ROA and Uniform ROA may not seem that great, the distortion in percentage ranges from -232% to 134%, with JG Summit Holdings, Inc. (JGS:PHL), Ayala Corporation (AC:PHL), Aboitiz Equity Ventures (AEV:PHL), and having the highest distortions.

As-reported metrics understate the profitability of Ayala Corporation, suggesting a below-average firm with an as-reported ROA of 2%. In reality, this is a firm with a 5% Uniform ROA. It has consistently generated returns of at least 9% through 2005-2019.

Likewise, as-reported metrics understate the profitability of Aboitiz Equity Ventures, suggesting a below-average firm with an as-reported ROA of 3% when in fact, it is a high quality firm with an 8% Uniform ROA. It has consistently generated returns of at least 7% over the past decade.

The market is pricing JGS’s Uniform Earnings to plummet by 243% in the next two years, while sell-side analysts are projecting the company’s earnings growth to be immaterial.

Overall, as-reported numbers would have investors incorrectly conclude that this portfolio consists of low-quality companies. While these firms suffer from the adverse effects of the coronavirus pandemic, dragging down their short-term earnings growth expectations, Uniform Accounting metrics show that these mature, low growth, but high return companies have intact business models that should drive economic profitability moving forward.

As the Uniform Accounting tearsheet for International Container Terminal Services, Inc. highlights, it trades at a Uniform P/E of 15.5x, below the global corporate average of 23.7x, but around its historical average of 14.4x.

Low P/Es require low EPS growth to sustain them. In the case of International Container Terminal Services, Inc., the company has shown a 2% Uniform EPS growth in 2020.

Sell-side analysts provide stock and valuation recommendations that poorly track reality. However, sell-side analysts have a strong grasp on near-term financial forecasts like revenue and earnings.

We take sell-side forecasts for Philippine Financial Reporting Standards (PFRS) earnings as a starting point for our Uniform earnings forecasts. When we do this, International Container Terminal Services, Inc.’s sell-side analyst-driven forecast shows that Uniform earnings are expected to grow immaterially in 2021, followed by a 21% growth in 2022.

Based on the current stock market valuations, we can back into the required earnings growth rate that would justify ICT’s PHP 129.40 stock price. These are often referred to as market embedded expectations.

International Container Terminal Services, Inc. is currently being valued as if Uniform earnings were to shrink by 9% annually over the next three years. What sell-side analysts expect for ICT’s earnings growth is above what the current stock market valuation requires in 2021 and 2022.

The company has an earning power that is 2x long-run corporate averages, and its combined cash flows and cash on hand consistently exceed obligations. Based on its operating risk and refinancing capability, it has an intrinsic credit risk of 300bps, indicating moderate dividend risk and moderate credit risk.

Investors who don’t engage in the buying or selling of securities for a living oftentimes rely on professionals to manage their own investments within the scope of their investment policies.

Every Friday, we focus on one fund in the Philippines and take a deeper look into their current holdings. Using Uniform Accounting, we identify the high-quality stocks in their portfolio which may not be obvious using the as-reported numbers.