For years, investors had a simple rule of thumb to determine if the market was cheap. From asset managers to newscasters, it was an easy soundbite to repeat, and had enough basis in reality to anchor expectations.

Now, the old relationship is beginning to break down. While some may fear this is due to a market bubble or other factors, there is something else at play breaking this old rule of thumb.

There’s an old rule investors used to use to gauge how expensive the market was.

They would add the P/E ratio of the market to the current inflation rate. If the number was less than 18x, the market was cheap.

Meanwhile, if the number was above 18x, investors should beware, as the market was getting expensive.

The rule of 18 made intuitive sense for many investors and pundits. The P/E ratio is a classic measure of a company’s value, which makes it a popular tool for investors studying individual equities. By aggregating the measure, investors had one piece of the puzzle.

However, the rate of inflation also has an impact on stock market valuations, as we most recently talked about here. At a higher rate of inflation, investors would take home less real value by investing in the stock market. In other words, if money is worth less later, why save it instead of use it?

This rule was bandied about by U.S. wealth managers and economists for decades in the 20th century. As a quick “dipstick” for measuring how hot the economy was getting, it was a useful tool for explaining valuation.

Now, the market would be undervalued if the average market P/E and inflation rate equaled 20 or less. With the market showing signs of strength above the rule of 18, investors realized they needed to revise the number.

As the market continued to rise, investors were quick to call for a correction, as the combined total went above 20x. However, Ancora Advisors are now calling for a rule of 21!

As stocks keep rising, many investors must wonder if it’s a bit convenient that the needle keeps moving. Perhaps this simple rule is a little too simple.

Some readers may look to the shifting goalposts as a sign that investors always looking to be bullish are just constantly reevaluating the narrative, or inflation is becoming less important to valuations. In truth, as we covered two weeks ago, and have talked about many times before, inflation is still critical to equity valuations.

The reason why the goalposts keep moving is because there are other factors alongside inflation impacting market values.

As some of our regular readers will know, inflation isn’t the whole story when looking at market valuations. Both inflation and taxes make their own impact on the P/E of the market.

Over the past twenty years, inflation has been consistently low, keeping P/E ratios up. However, the rule has to be adjusted “up” to 21x partly because the simple rule doesn’t capture the impact of taxes. Taxes have been in a secular decline for the past forty years. As taxes drop, more money goes from a company’s net income to investor’s pockets, meaning a stockholder gets more bang for their earnings dollar, and so is willing to pay a higher premium.

As you can see below, a lower tax rate leads directly to a higher average P/E no matter the inflationary context. 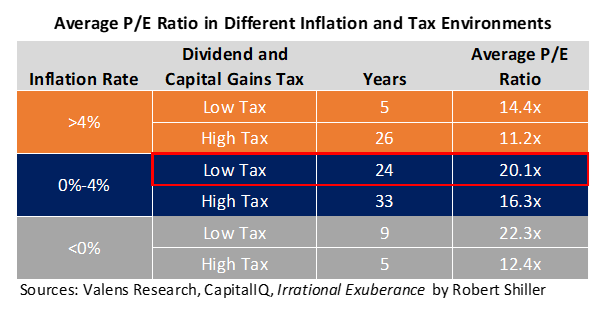 The other reason this simple rule has needed to be revised is the simple P/E plus inflation relationship of the Rule of 18 or more fails to capture the effect of compounding.

Inflation builds on itself, just like how higher compound interest in a savings account leads to exponentially higher returns.

Due to the compounding effect of any rate over time, as inflation changes, there isn’t a linear relationship with the P/E ratio, but an exponential one.

This means a rule of 18 or 20 or 21 will never hold true over a long period of time. There are too many other variables that determine how cheap or expensive the market is, including taxes, average returns, credit factors, and others.

Instead of worrying about what rule of thumb or single metric to gauge if the market is undervalued or overvalued, investors should be looking at the right, complete dataset.