Credit analysis is an important and integral part in monitoring the health of the economy since credit is an alternative source of funds for businesses and consumers. Bank deposits are put to more productive uses as loans, which can stimulate economic activity. When capital is not efficiently allocated, it leads to limited business opportunities or expansion, which slows down economic growth.

However, with the external shock brought by the pandemic, global and local credit markets have tightened their lending standards.

Through this credit indicator, we can get an idea of how the Philippine credit market is faring.

When we talk about a country’s credit environment, we have to talk about different factors such as the aggregate recovery rate, aggregate credit profile of listed companies, credit default swaps, credit lending standards, and yield curves, among others. Today, we will focus on the Philippine banking system.

Studying banks’ sentiments and their activities can give us some idea of where an economy is headed. That is because in emerging markets such as the Philippines with limited market infrastructure, banks are the most dominant players in the credit market. There are very few alternatives to banks as a source of debt funding, and there is limited infrastructure available to facilitate the trading of more financial instruments, such as corporate debt securities.

If banks become wary of potential borrowers, credit availability to businesses may decrease and potentially slow down the economy’s growth.

The SLOS is conducted by the Bangko Sentral ng Pilipinas (BSP) on a quarterly basis. The survey monitors the banks’ lending behavior, which is an important determinant of credit market trends, particularly in emerging markets.

As the majority of the banks in Q4 2020 did not further tighten lending standards, this breaks the two quarters of consecutive tightening. This may signal that banks are less pessimistic about the economy’s outlook due to the vaccine rollouts this year, which is expected to help the economy recover at a quicker pace. They are also expecting consumer and business loan demand to increase as spending once again picks up.

However, we also need to look deeper into the banking system to see how the banks are doing.

In one of our Monday Macro reports, we talked about the Non-Performing Loan (NPL) ratio, which is the portion of unpaid loans for more than 30 days after the due date, as a percentage of the total loan portfolio. A low NPL ratio shows strength in the financial system and state of the economy, while a high NPL ratio implies that banks have taken on low-quality loans.

Through the NPL ratio, we can better understand banks’ current credit risk levels. The chart below shows the historical NPL ratio of the Philippine banking system including during the Great Recession of 2008-2009. 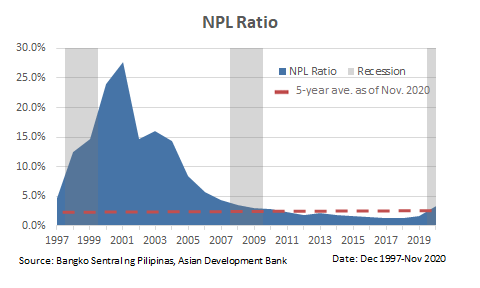 The Philippines experienced a sharp increase in non-performing loans versus total loans in the domestic banking system in 1998 due to the Asian Financial Crisis, from 4.7% in December 1997 jumping to 12.1% in the following month.

NPLs then stayed elevated for over several years until the government enacted a new legislative measure to curtail the rise in non-performing loans.

The Special Purpose Vehicle (SPV) Law or Republic Act (R.A.) No. 9182 came into effect in 2003, providing fiscal incentives to asset management companies (AMCs) or SPVs that purchase the non-performing assets (NPAs) of banks at a discount.

In addition, just last year, the government started the process of enacting fiscal measures to further mitigate losses to the banking system. With the Financial Institutions Strategic Transfer (FIST) bill, banks will be able to lend these NPLs to specialized companies that will collect NPLs for them.

This will also cost the government over the next five years as tax incentives will be provided upon transfer of the NPLs to the specialized companies. In turn, the banking system will be able to discharge trillions worth of loans, enable lending to private businesses such as small businesses, and save jobs. The enactment of this bill is likely to be in the near term as rules and regulations are expected to be finished within six months after its approval by the Senate last November.

However, since the current NPL ratio is at the level that banks can handle given their sufficient capital buffers, and that banks’ sentiment is likely to further improve this year due to the vaccine rollouts, credit standards are more likely to ease in the near to medium term horizon.

Moreover, historically, the Philippine banking system has been able to maintain above international standard capital adequacy ratio (CAR), averaging around 16% compared to the 8% required under Basel III and the 10% under BSP. As of June 2020, CAR is currently at 16.7%.

The Philippines continues to exhibit a favorable economic environment for the long term, that has not disappeared over this prolonged period of economic challenge.

Given the current NPL trend, stricter banking regulations, and the FIST bill, investors should not be worried about potential financial distress in the Philippine banking system.

However, if credit signals were to deteriorate, this would mean that the economy will take longer time to recover, rather than the V-shaped recovery that we are currently still seeing for the country.