Steve Cohen’s Mets are off to a hot start, but his fund isn’t seeing the same success this year

Few investors have shaped the hedge fund world as much as Steven Cohen.

Let’s check in with his fund to understand where he might be looking for alpha. Using Uniform Accounting, we may be able to understand exactly what he looks for, and if it’s working.

We’ve written before about hedge fund giant Point72 Asset Management and its founder, Steven A. Cohen, several times before-Cohen is always up to something, and his portfolio never seems to stay still.

Since our last Investor Essentials Daily on Cohen and Point72, he has officially taken control of the New York Mets, who sit atop the NL East.

His fund hasn’t been nearly as successful in 2021, due in large part to the fund’s involvement in the GameStop (GME) short squeeze earlier this year.

Overall, the fund employs a classic old-school hedge fund approach. In recent years, however, it has been modernizing and expanding into newer and younger ventures. For the uninitiated, here’s a quick refresher.

Cohen got his start in arbitrage option trading, where he rose through the ranks until he managed a team that made the company he worked for $100,000 a day.

Cohen then used $20 million, half of which was his own, to start S.A.C. Capital. In the stereotypical hedge fund way, S.A.C. traded often and aggressively, eventually amassing $14 billion under management.

The fund became a staple of the hedge fund universe. The HBO show Billions, which is meant to give viewers an accurate taste of the hedge fund pie, is actually largely modeled after S.A.C., along with some members of Tiger Management, which we wrote about in July.

The S.A.C. story ended when it got sued for $1.8 billion by the SEC for insider trading. It closed its doors in 2016.

From the ashes of S.A.C. emerged Point72, which was originally Cohen’s venture capital play. Nowadays, after a massive multi-year capital raise, Point72 is closed to outside investors and manages over $17 billion.

Cohen has taken the fund to several new directions, one of which is a foray into quantitative trading. The quant division, called Cubist, competes with the likes of Citadel, TwoSigma, and JaneStreet and pursues a similar strategy of hiring statistics, math, and physics PhDs rather than traditional financial analysts.

Although the fund keeps its lips sealed regarding its alpha strategy, many suspect it operates on information that, for most investors, is either completely unavailable or just plain difficult to obtain.

It is for this reason that the investment universe continues to track Cohen’s work. While we can never know what he knows, Uniform Accounting is a fabulous tool that can give us a deep insight into a portfolio.

Let’s see what we find as we dig back into Point72’s main public equity fund. The following is an audit of its 20 largest holdings. 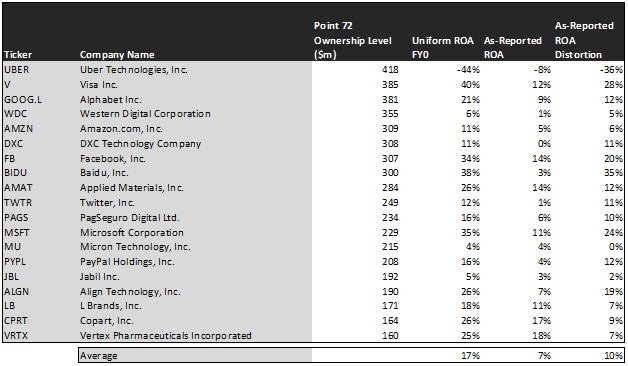 Using as-reported accounting, investors might think Point72 is buying names with low profitability levels. In reality, the firm sees through the accounting noise to pick up names markets are completely misunderstanding, often because of accounting issues.

On an as-reported basis, many of these companies are poor performers with low returns. The portfolio has an average as-reported ROA of 7%, which is around the corporate average.

However, once we make Uniform Accounting (UAFRS) adjustments to accurately calculate earning power, we can see that the returns of the companies in Point72’s portfolio are more robust.

The companies in the portfolio display an average Uniform ROA of 17%.

Once the distortions from as-reported accounting are removed, we can realize that Visa (V) doesn’t have a merely passable ROA of 12%, but robust returns of 40%. Visa is a cash-printer type business with minimal risk.

The average firm here boasts 10 percentage points better returns than as-reported metrics suggest. This, however, is nothing to write home about. It is right in line with many of the funds we have highlighted, and notably lower than some others, such as Morgan Stanley’s MACG.X, Concinnity Advisors’ KRMA, and Warren Buffet’s Berkshire Hathaway.

Similarly, this spread is smaller than it was when we highlighted the fund in January 2020.

One of the reasons for this may be Cohen’s biggest public equity bet: Uber Technologies (UBER), which wasn’t in the portfolio back then.

Uniform Accounting metrics show us that UBER significantly overstates its economic productivity. Like several of the other peer-to-peer ride-sharing or delivery companies, UBER struggles to make good use of its assets and hasn’t yet achieved a sustainable, profitable business model.

To find companies that can deliver alpha beyond the market, just finding cases where as-reported metrics mis-represent real profitability is insufficient.

This is where Cohen’s portfolio begins to make more sense, especially in comparison to other funds. Point72 chooses companies that are expected to perform better than their current valuations expect. 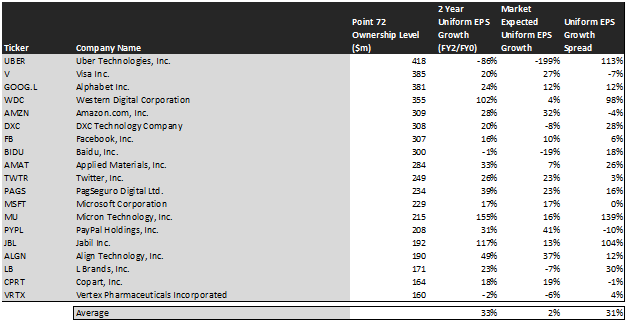 The average company in the U.S. is forecast to have 5% annual Uniform Accounting earnings growth over the next 2 years. Point72’s holdings are forecast by analysts to grow by 33%, well above average.

This is well more than the growth the market is currently pricing in. The market expects earnings to grow by just 2% over the next 2 years.

The best example of a mispriced company in this portfolio is Western Digital (WDC). The market expects earnings to grow by a barely-noticeable 4%, whereas analysts who work every day to project sales, growth, and market conditions believe that earnings will double.

These types of directional distortions indicate the market may think innovation isn’t worth a premium, or that companies like Micron aren’t as innovative as they really are. But the market doesn’t always have the same visibility into these companies as the analysts do.

That said, compared to its hedge fund peers, Point72 is overweighting well-known mega-cap technology corporations-companies like Amazon (AMZN). The portfolio is actually not too different from the Nasdaq 100 (QQQ), which anyone can invest in without paying lofty management fees.

This suggests that Cohen is looking elsewhere for high alpha. While large companies can be lucrative investments, many have already grown their shoes. The best funds seek to capture that growth before it happens.

This is where Cubist and Point72’s venture capital efforts come into play. We can never know exactly what happens behind those closed doors, but looking at its public equity portfolio, we see that for the most part, Cohen’s holdings are decent, undervalued companies with businesses displaying strong earning power.

This wouldn’t be clear under GAAP, but unsurprisingly, Uniform Accounting and a system built to deliver alpha can see the hidden potential of this portfolio in bright daylight.

Read on for a detailed tearsheet of Point72’s largest holding, Uber Technologies.

As our Uniform Accounting tearsheet for Uber Technologies, Inc. (UBER:USA) highlights, the Uniform P/E trades at -116.8x, which is below the corporate average valuation of 23.7x and its own historical valuation of -50.2x.

Low P/Es require low EPS growth to sustain them. In the case of Uber, the company has recently shown a 50% Uniform EPS shrinkage.

We take Wall Street forecasts for GAAP earnings and convert them to Uniform earnings forecasts. When we do this, Uber’s Wall Street analyst-driven forecast is a 63% and 124% EPS contraction in 2021 and 2022, respectively.

The company’s earning power is well below the long-run corporate average. However, cash flows and cash on hand are 2x its total obligations—including debt maturities and capex maintenance—and intrinsic credit risk is just 20 bps above the risk free rate. Together, these signal a low credit risk.